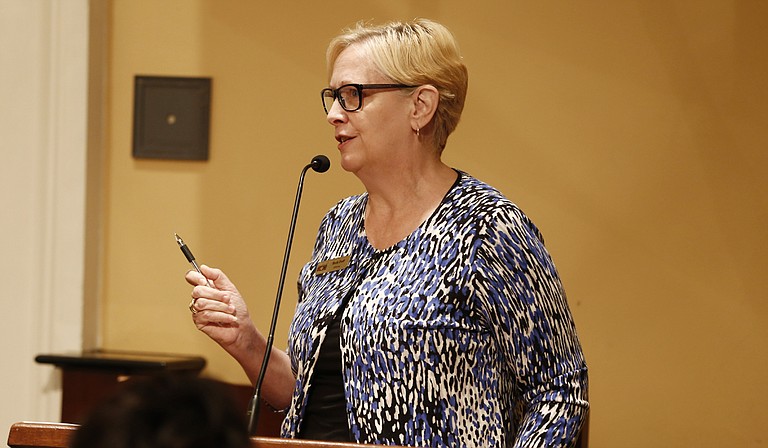 Beth Poff, executive director of the Jackson Zoo, doesn't want any additional funding from the city but says keeping the same level of funding will protect the park's accreditation. Photo by Imani Khayyam.

Lee Vance, chief of the Jackson Police Department, says criminal justice in Hinds County isn't working the way it should.

In presenting his budget for the coming year, Vance said this morning at a budget hearing at Jackson City Hall that the Hinds County jail is overcrowded, and his officers are seeing a lot of repeat offenders out on the streets. As a result, Vance said, the way JPD fights crime is by having as large and visible a police force as possible. He implored council members not to slash his budget for personnel.

Mayor Tony Yarber proposed a $37.1 million budget for JPD in the coming fiscal year, a cut from last year's adopted budget of $39 million.

Vance said the proposed police-spending plan contains no funding for a recruit class this year, nor does JPD plan to buy any vehicles. Ordinarily, JPD spends $350,000 to $375,000 per year leasing vehicles.

The chief said the department has 32 police-officer vacancies and 20 civilian positions, and is struggling to retain employees. For example, the JPD's DART team—a flex squad that can be moved around the city to accommodate Jackson's crime-fighting needs—is down to 10 officers, Vance said.

In the meantime, JPD has also taken on additional responsibilities. When Yarber came into office, he put code enforcement under the purview of the police department.

Two other departments also made budget presentations. Beth Poff, the executive director of the Jackson Zoo, said the park is in a good financial position and debt-free. She requested level funding from the city—the same $1.2 million appropriation the zoo requested last year.

In addition to the funding the zoo gets from the city, Poff said the state kicked in $500,000 and will give another $1 million in bond funds in the coming year. Hinds County also donated funds for the zoo's walkways.

Poff said attendance has hovered around 114,000 visitors per year. Ward 2 Councilman Melvin Priester Jr. said the city is in a tough financial spot and asked what would happen if the park didn't get the full funding request.

The zoo director said if the Association of Zoos and Aquariums, which accredits the zoo, saw the funding level drop, the association might look to pull the zoo's accreditation again.

Parks and Recreation also proposed a $6.3 million budget, down from $7.7 million last year.

The council broke for lunch and reconvenes at 1:30 p.m. today.