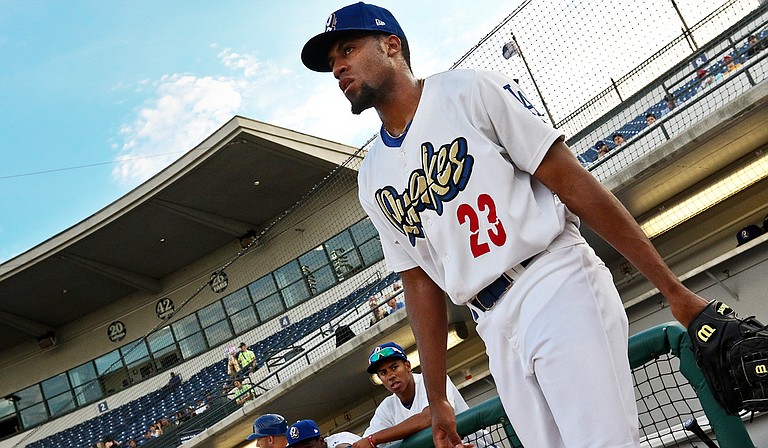 The phrase, "You can't go home again," from Thomas Wolfe's novel of the same name, has become a part of the American lexicon. All due respect to Wolfe, but he must have never met anyone in the minor league baseball system.

The Dodgers selected Bird out of Murrah High School in the ninth round with the 296th pick of the 2012 MLB Draft. The Jackson native decided to play with the Dodgers instead of the University of Southern Mississippi, where he committed to play for college.

While playing for the Mustangs, Bird finished his senior season with a 5-4 record, a 3.14 ERA and .411 batting while leading Murrah to the playoffs. After L.A. drafted him, the Dodgers assigned Bird to the Arizona League Dodgers for rookie ball.

While there, Bird went 1-2 in 10 starts with 4.54 ERA and 46 strikeouts to just 17 walks to finish out the 2012 season. Bird spent 2013 with two teams, the Ogden Raptors of the Pioneer League (Rookie Level) and the Great Lakes Loons (A Level) of the Midwest League.

The 2013 season was a struggle for Bird, even though MLB ranked him 11th among Dodgers prospects. He finished the season with 4-9 record in 28 appearances with 20 starts and a 5.38 ERA. The right-handed pitcher struggled with control at times, walking 64 batters but scoring 94 strikeouts.

Bird was able to bounce back in the 2014 season and find his form on the mound with the Loons. He finished with a 6-17 record in 26 appearances with 24 starts and one complete game as he posted a 4.25 ERA.

Bird went to the Rancho Cucamonga Quakes of the California League (Advanced A Level) to start the 2015 season. With the Quakes, Bird posted a 4.75 ERA in 19 appearances with 17 starts.

The former Mustang had a 5-7 record in Rancho Cucamonga with 95 strikeouts to just 48 walks. Once again, he dropped his WHIP (walks plus hits per inning pitched) from 1.46 for the 2014 season to 1.37 in the California League.

Just after his 21st birthday, the Quakes traded Bird to Atlanta and assigned him to the Mississippi Braves. This would not be the first time he pitched at Trustmark Park, having done so while at Murrah in the Crossroads Diamond Club All-Star Game.

Bird made his first start for the M-Braves on Monday, Aug. 3, and proved that being home suits him well. Bird pitched 5 2/3 innings of scoreless baseball with three walks and two strikeouts. The M-Braves lost the game 1-0, but Bird shined after a rough first inning in which he walked two batters. He settled down after the bumpy beginning to have a nice start to his first Double A game and allowed just two hits.

Currently, Bird is ranked as the Atlanta Braves' 13th overall prospect and will get a good chance to show his stuff for the rest of this season at the Double A level. The scouting report says Bird has a good fastball that has been clocked in the upper 90s. He is currently working on a few off-speed pitches with his slider being his best, but he also has a decent curveball and changeup.

The major knock on Bird so far has been his command and control, which can lead to walks and hits. He has gotten better at both during his movement up the minor league system.

He has the height and size to be a major league pitcher, and at 21 years old, there is plenty of time for him to keep developing. A call up to the majors could happen in the next three seasons.