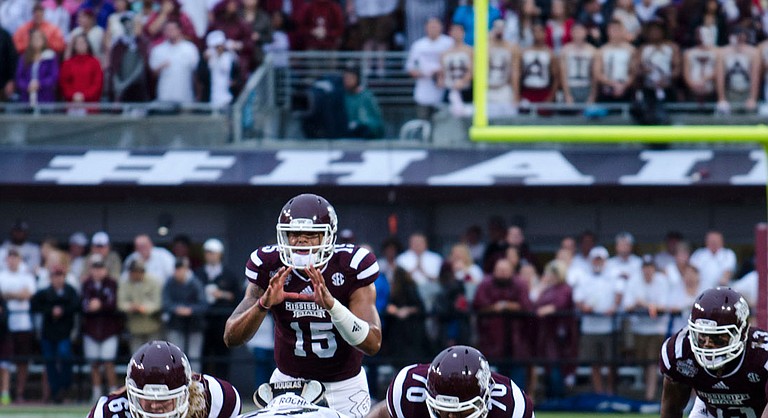 Prescott passed for two touchdowns and ran 56 yards for another score, and the Bulldogs survived a furious fourth-quarter rally by No. 8 LSU to snap a 14-game skid in the series, 34-29 on Saturday night.

Prescott, a Louisiana native who'd also been recruited by LSU, said he accomplished "exactly what I wanted to do when I committed to Mississippi State."

"I just stayed true to myself, trusted my teammates, trusted the coaches and we got it done," Prescott said. "Everybody's happy right now."

Prescott passed for 268 yards and rushed for 105 yards in helping Mississippi State build a 34-10 fourth quarter lead that proved insurmountable, albeit narrowly. Mississippi State's defense, which allowed only a field goal through the first three quarters, appeared to lose its edge in the final minutes, when the Tigers, led by backup quarterback Brandon Harris, struck for a pair of late touchdowns — both on passes to Malachi Dupre — in the span of 28 seconds.

The game ended with Harris attempting one more long, desperation pass for the win, but it was intercepted at the goal line by Will Redmond, who was mobbed by teammates moments later as the few LSU fans who'd stuck around fell silent.

"I probably aged seven to 10 years in the final three minutes of the game," said sixth-year Bulldogs coach Dan Mullen. "We are trying to build a program and I'll take it. I guess everybody can now write now I have beaten LSU and Alabama once during my career."

"He ad-libbed and ran their offense extremely well," LSU coach Les Miles said of Prescott. "Hats off to him — a very quality competitor."

Prescott's touchdown passes included a 74-yarder to Jameon Lewis, who had five catches for 116 yards. De'Runnya Wilson caught four passes for 91 yards, including a tough 9-yard touchdown catch along the sideline to give the Bulldogs a 7-0 lead. Josh Robinson rushed 16 times for 197 yards and a touchdown, as MSU piled up 570 yards, the most yield by LSU since Miles became coach in 2005.

The Bulldogs never lost their early lead, thanks to a first-quarter goal-line stand in which they stopped four straight LSU runs from the 2. Prescott then drove the Bulldogs 98 yards to make it 14-0.

"We fed off our defense's momentum all night long and especially when they made that stop on fourth down," Prescott said. "That was huge on the goal line. The offense has our defense's back and vice versa."

Mississippi State first three victories over Southern Mississippi, UAB and South Alabama hadn't won over enough AP poll voters to get the Bulldogs into the Top 25. That's bound to change after Mississippi State became first unranked team to win in Tiger Stadium since Mississippi did it in 2008, when LSU was ranked 18th.

The contest marked the first Southeastern Conference game in Tiger Stadium since its expansion above the south end zone, increasing capacity to more than 102,000. But with the Bulldogs leading 31-10 and driving inside the LSU 20 as the third quarter ended, fans started filing out early.

Asked if his players seemed flat, Miles spread the blame.

"It's not necessarily just the players. I'm putting first of all the responsibility on me," Miles said. "I know our guys on our team expect more from themselves. ... They're stung and it's not something that they enjoyed."

LSU's defense, which was oozing with confidence after shutting out opponents for the equivalent of about 10 quarters, was staggered repeatedly by Prescott and Co. Mississippi State gained 20 or more yards on 10 separate plays. Those included a 66-yard run by Robinson which set up a second-quarter field goal to make it 17-0.

LSU was as close as 17-10 after defensive end Danielle Hunter returned Prescott's fumble for a 25-yard score early in the third quarter. Prescott responded the on the next series by ripping off his long scoring run, faking defensive back Jalen Collins to the ground with a hard cutback to the right before outracing remaining pursuers to the goal line.

''There was not one bit of panic or one bit of concern," Mullen said. "Our guys played with a lot of confidence. We made plays when we needed to. We have been doing that all year. When we need a big play, guys step up and make them."