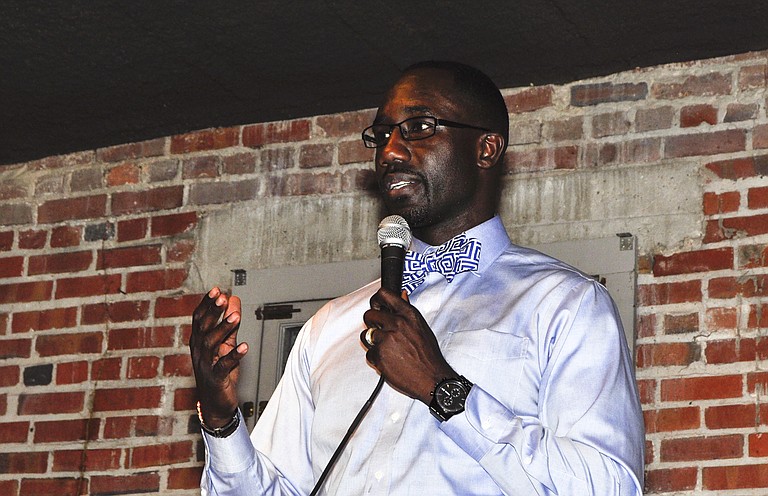 Mayor Tony Yarber said that the sale-tax money would not be used in isolation, but that the commission and city would look for opportunities to apply for grants that require a match and to "leverage debt," but he offered no specifics on how debt would be used. Photo by Trip Burns.

In the long-running soap opera known as Jackson's 1-percent sales tax option, the wards are about to turn. That is, dirt could be moving in all seven of Jackson's wards on various infrastructure-improvement projects as soon as the first quarter of 2015, according to Mayor Tony Yarber.

The 10-member sales tax commission, the composition of which was a political football for years, is now in place and recently held its first meeting. That commission—Yarber and two other city officials are members—will develop a master plan for how the city will spend proceeds from a tax the city recently levied on certain goods.

Yarber told a packed crowd at Koinonia Coffee House today that the commission hopes to finalize Phase I of the master plan by the end of October and present it to the Jackson City Council, which has no statutory authority over how the 1-percent sales tax funds will be spent.

By some estimates, the tax will bring in approximately $15 million per year for infrastructure projects around the city. Yarber tried to get ahead of questions about the inherent nature of the politicization of awarding government contracts by assuring the crowd that officials have not solicited requests for proposals or statements of qualifications for any sales-tax-related projects. He added that the commission would hold a roundtable for potential vendors. Echoing statements he made during his campaign for mayor earlier this year, Yarber said he wants to hear how prospective contractors plan to build capacity and offer training and apprenticeships.

Yarber added that the sale-tax money would not be used in isolation, but that the commission and city would look for opportunities to apply for grants that require a match and to "leverage debt," but he offered no specifics on how debt would be used. The mayor also said that any construction that takes place would incorporate energy-efficiency strategies.

"You won't just see a lot of concrete and asphalt. You'll also see a lot of trees and green space," Yarber told the west Jackson audience.

Jackson has been collecting the tax—levied on most items except food, hotel and motel rooms and telecommunications services—since March.

Soon afterward, the Mississippi Legislature amended the original 2009 law that made it possible for the city to hold a city referendum on the tax. Under that legislation, the sales tax would exempt food and beverages at restaurants, which brought criticism from Jackson officials and residents.

Under state law, wholesalers of beer and light wine charge a 7-percent sales tax to retailers; retailers in turn apply that 7 percent tax as a state income-tax credit. Under the original sales-tax hike, wholesales would have to charge retailers 8 percent in sales taxes. But retailers would then pay the additional 1 percent to the retailer, but only receive a 7-percent tax credit.

Yarber called the change a tradeoff. In other legislation, lawmakers gave Jackson the ability to make implementation of the tax retroactive, allowing the city to collect an additional three years of the tax. Thus, Yarber says he won't put up a fuss about the legislative amendment. Channeling Kenny Rogers, Yarber said: "You've got to know when to hold 'em, know when to fold 'em."