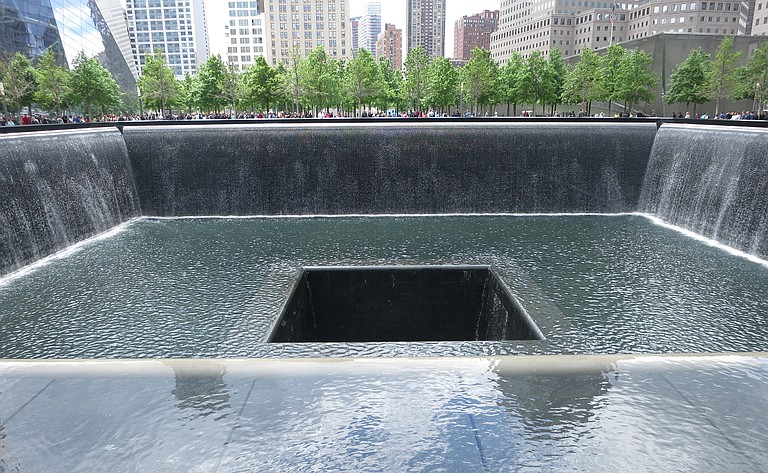 With the solemn toll of a bell and a moment of silence, the nation paused Thursday to mark the 13th anniversary of the Sept. 11 attacks at the hallowed site just hours after President Obama promised to root out and destroy a new group of terrorists threatening the U.S.

NEW YORK (AP) — With the solemn toll of a bell and a moment of silence, the nation paused Thursday to mark the 13th anniversary of the Sept. 11 attacks at the hallowed site just hours after President Obama promised to root out and destroy a new group of terrorists threatening the U.S.

Family and friends of those who died read the names of the nearly 3,000 people killed in New York, at the Pentagon and near Shanksville, Pennsylvania. Thelma Stuart, whose husband, Walwyn Wellington Stuart Jr., 28, was a Port Authority Police Department officer, said the nation should pray for its leaders, "that God will grant them wisdom, knowledge and understanding on directing them on moving forward."

In an address Wednesday, Obama said he would open a new military front in the Middle East — authorizing airstrikes inside Syria along with expanded strikes in Iraq as part of "a steady, relentless effort" to root out Islamic State extremists.

Adriana Fiori, reading her father Paul's name, wept. "You put me to bed 13 years ago not knowing it would be your last time," she said. "I miss you so much, Daddy."

Joanne Barbara, whose husband of 30 years, Gerard Barbara, was a FDNY captain who died, urged all to feel for not only the lost but "those who continue to suffer from the aftermath."

"May God bless America, and may we never, never forget," she said.

Little about the annual ceremony at ground zero has changed. But so much around it has.

For the first time, the National Sept. 11 Memorial Museum — which includes gut-wrenching artifacts and graphic photos of the attacks — is open. Fences around the memorial plaza have come down, integrating the sacred site more fully with the streets of Manhattan while completely opening it up to the public and camera-wielding tourists.

A new mayor is in office, Bill de Blasio, one far less linked to the attacks and their aftermath than his immediate predecessors. And finally, a nearly completed One World Trade Center has risen 1,776 feet above ground zero and will be filled with office workers by this date in 2015, another sign that a page in the city's history may be turning.

But painful memories linger. Franklin Murray of New York wore a shirt with a photo of his brother, Harry Glen, who worked at Cantor Fitzgerald, one of the companies that lost the most workers.

He said it gave him a "funny feeling" to know there was now a memorial. He has come to the ceremony before but "before it was getting harder, so I forced myself to get down here."

"Coming down to the area is rough," he said.

For some, the increasing feel of a return to normalcy in the area threatens to obscure the tragedy that took place there and interfere with their grief.

"Instead of a quiet place of reflection, it's where kids are running around," said Nancy Nee, whose firefighter brother, George Cain, was killed in the attacks. "Some people forget this is a cemetery. I would never go to the Holocaust museum and take a selfie."

But for others, the changes are an important part of the healing process.

"When I first saw (One World Trade Center), it really made my heart sing," said Debra Burlingame, whose brother Charles Burlingame was piloting the plane before it crashed into the Pentagon. "It does every time I see it because it's so symbolic of what the country went through."

The memorial plaza will be closed to the public for most of the day and available only to family members. It will reopen at 6 p.m., at which point thousands of New Yorkers are expected to mark the anniversary at the twin reflecting pools where the towers once stood.

The first ceremony at the site was held six months later and was organized by then-Mayor Michael Bloomberg and his aides. Bloomberg, who took office just three months after the attacks, remained in charge, acting as the master of ceremonies for the next decade. He attended on Thursday, along with Rudy Giuliani who was mayor during the attacks, New Jersey Gov. Chris Christie and New York Gov. Andrew Cuomo.