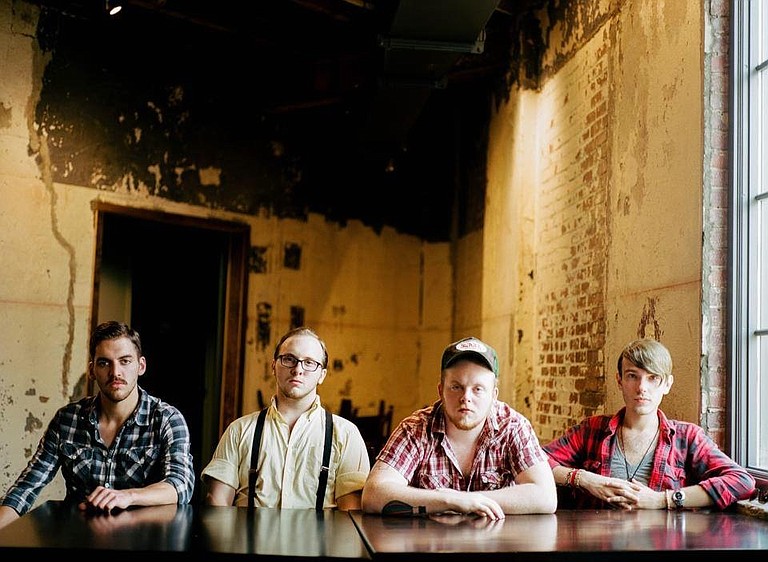 The country-influenced rock of Young Valley has quickly earned the band attention from fans and fellow Jackson musicians.

Jackson is already home to a vast stable of genre-defying original music, but in the last few months, Young Valley has emerged as the new band on the block. The group has carved out territory in the musical neighborhood of Fondren, playing a loose melange of country, indie and alternative rock, with a touch of bluegrass. The four-piece, fronted by fraternal twins Zach and Dylan Lovett, brings new energy to both the Jackson scene and the meaning of "twang."

For the Zach and Dylan, Young Valley isn't a one-man show. Both twins sing and play guitar, with Zach on acoustic and Dylan on electric, while bassist Carson Braymer and drummer Spencer Thomas handle rhythm. Both Lovett brothers and Thomas write and sing for the band.

"This is the kind of music I've wanted to play," Zach Lovett says. "It's got a country vibe but gets pretty rocking. We have a couple songs with some bluegrass influence. It's just an awesome hodgepodge of music we all love."

The boys of Young Valley have a storied history together that exceeds their newest project. Zach Lovett, Braymer and Thomas have played together for the last four years as members of bluegrass band Dandy & the Lions, while the twins have been jamming together since their early teens. This familiarity made the formation of the band both natural and casual.

"Last summer, me and Dylan had some songs we'd been working on together," Zach Lovett says.

"I had some songs, and Spencer had a few. We figured there was enough material to play somewhere. We played a couple shows at Hal and Mal's. The turnout was great, and the response was really good."

With the boost of confidence that comes from seeing people enjoy themselves and a few successful performances, the group soon declared itself official.

Young Valley is a fitting name for the band: The musicians are all 22 years old, except Braymer, who's 20. Even with a member just shy of 21, the group has been gigging regularly in Jackson and beyond for about a year.

"We mostly play in town, but Dylan is a hound," Lovett says. "If we ever make it as a band, it will be because of my brother. He puts his nose to the ground and sniffs out places where we can play. We played The Nick in Birmingham—it's like the CBGB's of Alabama—a real dive where all these incredible bands have played."

Lovett says his twin is constantly on his computer and phone, working to line up shows and get the word out about Young Valley. It took a "semi-fight" to delegate some of the marketing responsibility.

"Everyone in the band has a promo job," he says. "Spencer handles our Twitter account. Carson brings the moral support (since) he's the one with all the friends. As soon as I got a smart phone, Dylan gave me a job taking pictures for Instagram."

With help of Sneaky Beans owner Byron Knight, Young Valley is finishing its debut record, "No Filter," due for release in late November. The group helped Knight to assemble a recording studio for Bellwether Church in Jackson last December, and he offered to record the album as a token of gratitude. "No Filter," which Young Valley finished recording this summer, features guest spots from local talent such as pianist Tyler Kemp, fiddler Matthew Magee, pedal-steel player Jeff Reynolds and singer Amber Flores.

Lovett attributes much of their success to playing and working in Fondren, and to the Jackson musicians who congregate in the neighborhood, including singer-songwriters Cody Cox of Furrows and Joey Plunkett of Paperclip Scientists.

"With Carson and Dylan at Fondren Guitar and me at Sneaky Beans, we've finally worked our way into the music scene," Lovett says with an enthusiasm that confirms his age. "We're the young pups. .... Everyone has been really supportive. It's been really humbling."

Looking Back at the Best

This year's Best of Jackson results highlighted some of the city's sure-fire entertainment options, whether you're scoping blues bands, proving your pipes with karaoke or hunting the perfect dive bar. Reigning champs include Jarekus Singleton, David Banner and three-category winner Jason Turner. For a full recap of finalists, winners and what you've been missing, visit bestofjackson.com.