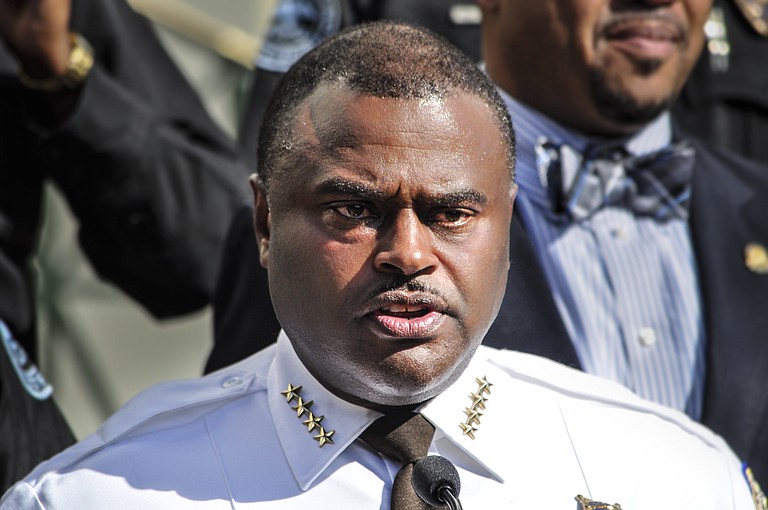 Several media outlets, including the Jackson Free Press, reported that Hinds County Senior Circuit Judge Tomie Green—who called a grand jury together in 2013 after an uprising that left a housing pod unusable, the subsequent death of a prisoner named Larry David McLaurin and other incidents of unrest—empanelled the grand jury that delivered its findings yesterday, Oct. 3.

In an email to the Jackson Free Press this morning, Green clarified that it was a grand jury Smith empanelled in July 2014 that inspected the jail and delivered its findings to Green late yesterday afternoon.

Calls to Smith's office as well as to Lewis' spokesman Othor Cain were not immediately returned this morning.

The four-page grand jury report followed inspections of the jail as well as the Hinds County Courthouse and concluded that "after hearing from (Lewis) and his team, we are of the opinion that Sheriff Lewis is incompetent to oversee the jail or keep pretrial detainees or state inmates safe in a manner or to keep the public safe from inmates."

In their report, grand jurors note that during an inspection of the facility, they observed "the immediate after effects of arson" as well as a prisoner who exposed himself and another prisoner who possessed a cell phone, which they pointed out is a felony. In addition, the jail lacked an adequate number of jailers, and the guards on duty were frightened of the inmates.

"The inmates seemed to be in control of the jail as a result of the shortage," grand jurors wrote.

The grand jury also noted other health and safety concerns, including mildewed tiles in the prisoner's shower area, cell doors stuffed with toilet paper to prevent them from locking, several cracked glass windows and areas where lights do not work properly. The control and booking room requires new cameras and monitors and has several areas that are moldy, jurors observed.

The U.S. Department of Justice announced June 2 that the agency would open a "pattern or practice investigation" of both the Raymond Detention Center and the Jackson Detention Center downtown. A DOJ press release stated the investigation would focus "on whether Hinds County protects prisoners from harm at the hands of other prisoners and staff" and "improper use of force." Judge Green said the probe is ongoing.

Lewis has long complained that his difficulty maintaining the building stems from the Board of Supervisors and County Administrator Carmen Davis holding the purse strings to the jail and must approve all repairs.

Judge Green empanelled a grand jury last year, she said, because a thorough inspection of the jail had not taken place since 2008. It found "a great deal of ongoing conflict in this 'arranged marriage' between the county and the sheriff."

"The sheriff claims that the County has failed to adequately maintain the basic maintenance needs of the facility. When they need a repair, a work order is submitted, but the County is slow to make the needed repair. The result is a facility that is in disarray in its basic electric, plumbing, smoke alarm, control boards, ventilation and security systems," they wrote.

In the most recent report, grand jurors also inspected the Hinds County Courthouse and found that "it is in good and safe condition," except for its outdated cameras and poorly functioning elevators, which have been a frequent source of conversation among county supervisors. Grand jurors also observed several areas of water damage, including "a constant drip from the ceiling that is damaging the clerk's office."

The JFP uncovered similar problems at the courthouse causing damage to thousands of files. Hinds County Circuit Clerk Barbara Dunn denies that any documents are at risk.

Yesterday evening, the Hinds County Board of Supervisors called an emergency meeting, which Smith attended briefly, and went into executive session to discuss the report but announced no action.

A jail is not a "deferred maintained facility" as the penny-pinching Supervisors seem to think. If the jail is under the Sherriff's Office, then the jail should have its own maintenance, janitorial staff, cafeteria staff, etc. and the Sherriff should be given sufficient positions and monies to both staff and run the facility safely and efficiently. The Sherriff should be responsible to the Supervisors for the staff (both quality and quantity), and keeping the budget in line, reporting to the Supervisors during the year on the status of the personnel, the inmates, and the budget, and well as the facility. The first thing we need to do is get control of this facility. The next thing we need to do is move cases through the system more efficiently. Sherriff Lewis has pointed out that some prisoners have sat in jail for seven years, and one for eight years without a trail. Are you kidding? I don't know the circumstances, but even a first-year law student ought to be able to file a writ to release these people under the US Constitutional concept of "a speedy trial."