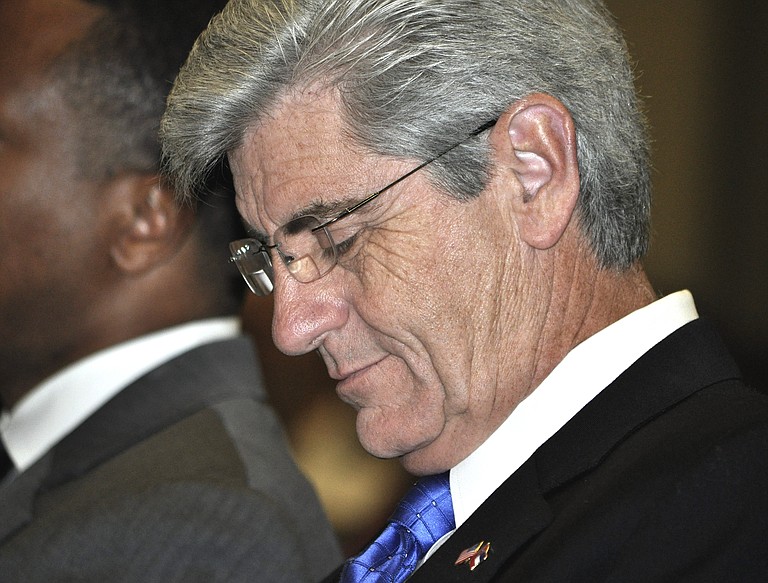 Republican Gov. Phil Bryant said Monday that he wants to cut income taxes for some Mississippians earning less than $53,000 a year as part of his 2016 budget proposal. Photo by Trip Burns.

Republican Gov. Phil Bryant said Monday that he wants to cut income taxes for some Mississippians earning less than $53,000 a year as part of his 2016 budget proposal.

The tax cut is the centerpiece of his spending plan for the 2016 budget year, which begins July 1.

"We believe now it is time to give tax relief to the working men and women of Mississippi," he said in a news conference.

Legislative leaders will release their own proposal in December, and both will be considered when lawmakers convene in January. An April budget deadline comes months before most lawmakers and Bryant are expected to seek re-election in November 2015.

The tax cut would piggyback on the existing federal Earned Income Tax Credit. Married people with three or more children making up to $52,427 a year might get relief under the proposal. A single childless person would benefit if making less than $14,590 a year.

Also, the Mississippi plan would only apply in years when state revenue grew by at least 3 percent and when the state's main savings account is full. That means that taxes would go up during recessions, when wage growth and incomes may already be depressed.

Bryant, who emphasized that he's open to other legislative proposals, said he sees the credit like a rebate.

"What I'm trying to do is return their money when we have it, much like a dividend," Bryant said.

Bryant proposed about $100 million more for state agencies, pushing the general fund budget to almost $6.2 billion. The state spends about $14 billion more from other sources, including $9 billion in federal aid.

Revenue for general fund agencies is projected to go up only by about $120 million. With $100 million more in spending and a $78.7 million tax cut, Bryant made the math work by projecting another $60 million in taxes would be collected by adding auditors at the state Revenue Department. That department would get $7.5 million to hire the auditors.

The 2015 session could see a contest between tax cuts and more money for Mississippi's public school funding formula. In choosing a tax cut, Bryant would add only $52.7 million to the Mississippi Adequate Education Program. About $40 million of that would pay for a second year of promised teacher pay raises. The remaining amount would barely dent the $311.7 million that lawmakers would have to add in 2016 to provide what the formula calls an adequate amount of aid to school.

—Almost $900,000 more to give a 3 percent pay increase for state troopers and driver license employees at the Department of Public Safety.

— $1.2 million more for a program that would try to reduce teen pregnancy among community college and university students.

— $2 million more for Jackson State University to start a school of public health.

— $1.5 million more for the state Health Department to try to reduce deaths among mothers and infants.

— $3 million more for the Department of Mental Health