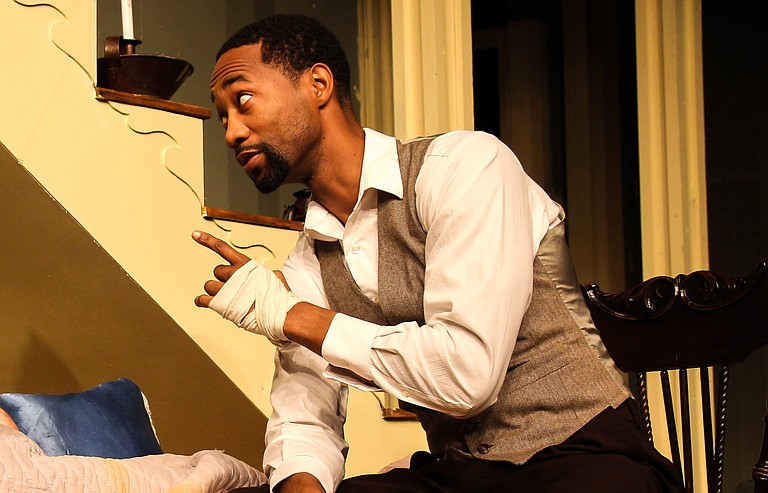 Jackson State University professor Yohance Myles has starred in numerous plays around Jackson, including “The Whipping Man,” where he played a just-freed slave named John.

Watching Yohance Myles, 33, on stage in the recent Fish Tale Group Theatre production of "The Laramie Project," you witness a continual character transformation not typical of most plays. By simply removing or adding an article of clothing, or changing his dialect and tone, Myles effortlessly and completely inhabits each of the 11 roles he plays. Putting on a striped tie, he becomes a priest overseeing a funeral. Pulling on a pair of plastic gloves, he becomes an emergency-room doctor in the midst of a procedure. Stripped to basic black clothing, jaw clenched, words tight and eyes narrowed, he becomes the accused. The continuous shifting about on stage parallels the multiple hats Myles wears each day in real life in his role as a father, husband, teacher and actor.

While his mother, Wanda Webb-Moore, fostered the creative tendencies of her second oldest of five children, it was seeing a performance of "Peter Pan" in the fifth grade that sparked the Birmingham, Ala., native's interest in acting. However, it was not until his senior year in high school that Myles began giving serious consideration to becoming an actor. He went on to obtain a bachelor's degree in theater from Alabama State University in 2006 and received a master's degree from Louisiana State University three years later.

It was Stewart who advised Myles to pursue teaching in the wake of the uncertainty in the entertainment industry during and after the 2007 Writers Guild strike. Since 2010, Myles has been a theater professor at JSU. While his biggest reward comes from fostering talent in others, he also appreciates the opportunity for his students to see him in both community and campus productions applying the techniques he teaches. "If I'm telling you, these are the components of acting and this is what makes a great character, you can now go see me execute what that is," he says.

He has nothing but praise for the local theaters with which he has had an opportunity to perform. He is especially complimentary of New Stage Theatre's Artistic Director Francine Thomas Reynolds.

"She's been wonderful at figuring out what to cast me in," he says. At New Stage, Myles has been featured in "The Whipping Man" and "A Soldier's Play." "I've been around and exposed to people who are serious about bringing good stories and doing good quality work," he says of his experience with both New Stage and Fish Tale Group Theatre.

Myles gravitates towards roles that educate and challenge him as an actor. "The Laramie Project" gave him his first opportunity to take on multiple roles within a single play. In researching for his role in "The Whipping Man" as a tormented former slave on a Jewish-owned plantation, he learned about Jewish customs and gained insight into the African American Jewish population. Myles also likes plays that are different and creative, convey timeless messages and spark conversations. "Theater is not always about making you happy. If we can irritate you too, we've done our job," he says with a smile.

While the father of three has achieved much in his work as a professional actor, he aspires to have an impact on others' lives as well. In addition to forming a summer theater program, he and his wife, Kimberly Morgan-Myles hope to start a performance arts school.

Since wrapping up "The Laramie Project," Myles is taking some time to focus on more immediate goals, including branching out to other community theaters in the area. While he appreciates the breaks between projects, he remains motivated by his love for the craft, which goes beyond a profession for him. "It's a ministry to me. It's a platform that I use in so many ways for reaching and extending life to people," he says.