The Light of Activists 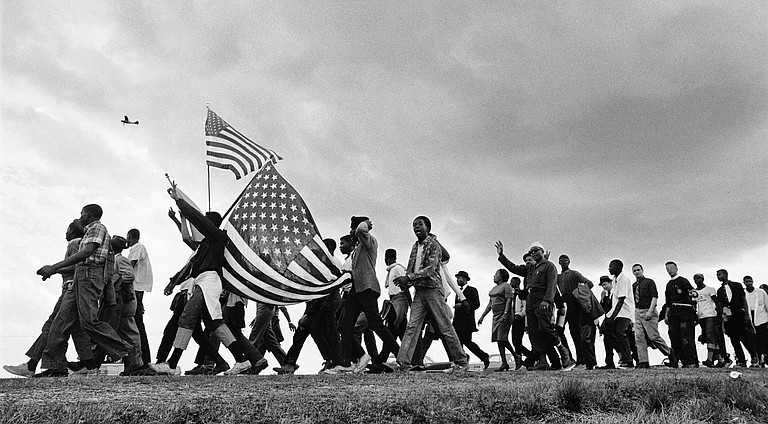 “Selma to Montgomery,” Matt Herron, 1965. The work of Herron and other activist photographers during the Civil Rights Movement will be showcased at “This Light of Ours,” showing at the Mississippi Museum of Art through August 17.

In the summer of 1964, several hundred college students came to Mississippi to work with the Student Nonviolent Coordinating Committee and its campaign to increase black voter registration. The campaign, marked by the murder of three organization volunteers in Neshoba County, succeeded in focusing national attention on Mississippi and its mandated oppression of African Americans and their right to vote.

This year marks the 50th anniversary of Freedom Summer. In celebration of the gains the SNCC made and in recognition of those who lost their lives, the Mississippi Museum of Art is hosting a number of exhibits, centered on "This Light of Ours: Activist Photographers of the Civil Rights Movement."

Organized by the Center for Documentary Expression and Art in Salt Lake City, Utah, the traveling exhibit consists of 157 black-and-white images. Because the everyday activists, rather than photojournalists covering breaking news, took the photos, they offer an insider's perspective.

"The exhibit makes sense for the museum," Julian Rankin, the MMA's director of new media, says. "Over the past few years, we've started a tradition of holding exhibits that connect historically with the anniversaries of the Civil Rights Movement."

Matt Herron, one of nine photographers represented in the show, is the curator for "This Light of Ours." Along with Heron, the exhibit includes images by Bob Adelman, George Ballis, Bob Fitch, Bob Fletcher, David Prince, Herbert Randall, Maria Varela and Tamio Wakayama.

All of the photographers in the exhibit lived and worked in the south between 1963 and 1967, primarily as members of SNCC. The images, which Heron grouped by theme, represent SNCC's strategy as an organization. Those themes include resolve in the face of violence, impact on the nation's policies and influence on the nation's consciousness. Audio guides—personal accounts recorded by the individual activist-photographers that accompany the images—give the viewer a deeper understanding of the moment the photographers chose to document and its impact.

"Activist photography is an interesting dynamic because the people taking the photographs are able to get up close and personal at the events," Rankin says. "Though some were artists, they weren't necessarily at the event to create art—they were there to document the story as it was happening."

During the exhibit, the community will be invited to contribute to a memory wall titled "A Wall To Tell Our Stories." People are encouraged to bring photographs and family mementos from the time period. "We'll make digital copies of people's documentation from that time period, as an interactive way to connect personal history with social and cultural history," Rankin says.

Submission guidelines for the memory wall will be available after the exhibit opens March 7. Digital images can be sent by email to Carol Peaster [email protected]

Several corresponding exhibits will be on display during the five-month duration of "This Light of Ours," which ends Aug. 15, including "The Slave Series: Quilts by Gwendolyn A. Magee" March 7-May 18. Using applique, embroidery and layered fabrics and embellishment, Magee creates pictoral quilts based on historical accounts of the treatment of slaves. Another event is "Norman Rockwell's Murder in Mississippi" June 14-Aug. 31. LOOK Magazine commissioned the piece in 1964, several months after the murder of three volunteers in Neshoba County, Rockwell created an iconic illustration for the cover of the magazine. Rockwell did extensive research about the circumstances of the crime and produced a number of preliminary drawings and sketches before completing the finished oil painting.

"This Light of Ours" will be in the Donna and Jim Barksdale Galleries for Changing Exhibitions at the Mississippi Museum of Art until August 17. Admission is $10 for regular admission, $8 for seniors, $5 for students and free for children ages 5 and under and museum members. Visit msmuseumart.org for more information or to purchase exhibition tickets.