Setting the Stage for Love 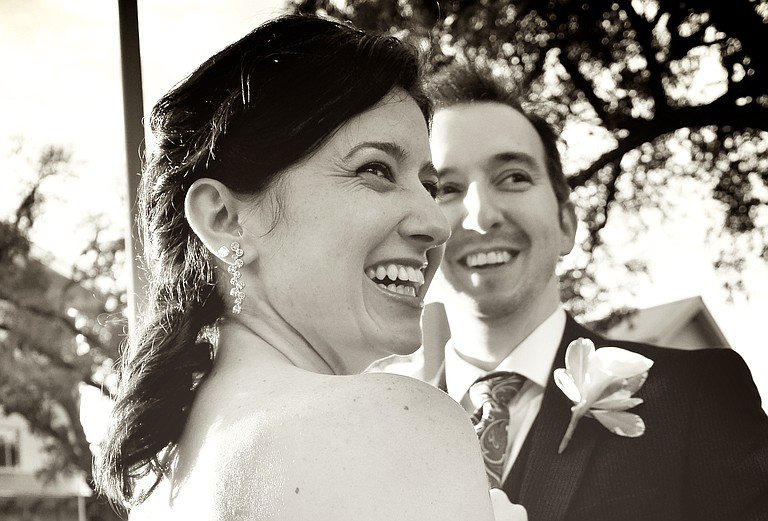 Weddings are, by their nature, theatrical events. In fact, theater has its roots in the performance of ritual activities. And for most people, a wedding is perhaps the closest they ever come to "performing" on a stage. For theater people, a wedding is very much in their wheelhouse, and when you bring an entire theater community together to produce one, you not only get the show of a lifetime, but one that's surprisingly free of drama!

My husband and I met Beth Kander at the first organizational meeting of Fondren Theatre Workshop in 2003. A recent Brandeis University graduate, she was new to Jackson and looking to connect with the community she was most familiar with: theater folks. Her mother had started a children’s theater in her native rural Michigan, and Beth and her siblings spent many, many hours writing and rehearsing and performing.

I met Danny Dauphin officially when he was cast in FTW's production of "American Buffalo" in 2006, although I'd certainly seen him around in other local productions. He, too, was a born-and-bred "theater kid" who had parents who were active in Gulfport Little Theatre for most of his childhood and beyond.

Soon after Beth returned to Jackson after getting her MSW in 2007, she and Danny found each other, became an item and soon after both joined the FTW board, becoming an integral part of our theater community, sharing their creative talents across the metro area as actors, writers and directors. But more importantly, Beth, Danny and a core group of our other theater friends have become a true family, sharing not only our creative passions, but becoming integral parts of each others’ day-to-day lives, celebrating holidays and birthdays, grieving together in times of trouble or loss, and creating a safe, nurturing place for each other where we are always free to be ourselves.

But more importantly, Beth, Danny and a core group of our other theater friends have become a true family, sharing not only our creative passions, but becoming integral parts of each others' day-to-day lives, celebrating holidays and birthdays, grieving together in times of trouble or loss, and creating a safe, nurturing place for each other where we are always free to be ourselves. So when it came time to put on a wedding, Beth and Danny decided to honor this very important part of their shared creative passions by taking a more theatrical approach to planning and execution.

Rather than traditional wedding planners, ushers, groomsmen and bridesmaids, they had a "production crew" comprised of a stage manager, house manager and set designers, and an "ensemble cast" of friends and family, each taking a specific role in the ceremony. They reached out and asked each of us to bring the best of our natural talents to the event and, in the process, honored each of us, as well.

The wedding and reception both took place in the main atrium of the Ohr-O'Keefe Museum in Biloxi, which was filled with large round tables draped in royal blue and topped with ivory candles and mirrors. At the top of the evening, the audience sat in front of an empty platform, and watched as members of the crew brought in the beautifully handcrafted chuppah (or wedding canopy) and literally "set the stage" for the ceremony. With the words "Joy, Community, Love" printed on the programs, the entire ceremony was crafted to focus on the fact that every marriage is connected for a lifetime to the community of family and friends who helped make it possible. You could actually feel the joy and love in the room wrapping around you.

With the vows exchanged, the ensemble "re-staged" the room for the meal to follow, which was a simple buffet of delicious gourmet pizzas and pastas from a nearby local Italian restaurant. The bar offered wines and a special beer brewed and bottled for the event by the groom's brother. The food service was flawless, expedited by a number of actor-types who've had more than their fair share of experience as "cater-waiters."

My husband and I were honored to be part of the ketubah signing ceremony before the wedding. In the Jewish tradition, the ketubah is the official marriage contract, witnessed by family and close friends. Standing in that small room with their immediate families and the other two witnesses and putting our names on that beautifully illustrated document was the most precious part of that day to me, because, in a sense, that is when we officially became family.

Which is why this story has a bittersweet ending. Last December, Danny got a fabulous job offer in Chicago and moved there in January. Beth stayed behind until just after the wedding in early March. On one weekend, we celebrated all of that joy, community and love, and the next weekend we packed all of it up into moving vans and cars and waved goodbye.

Much like the Jewish Passover tradition of tasting bitter herbs to appreciate the sweetness of honey, sometimes it does take acknowledging how temporal things are to truly embrace and appreciate them. But regardless of the miles, or even the years that may stretch out between us, our gypsy theater spirits will always find a way to keep them as part of our joy, our community and our love.