The Children Will Lead Them 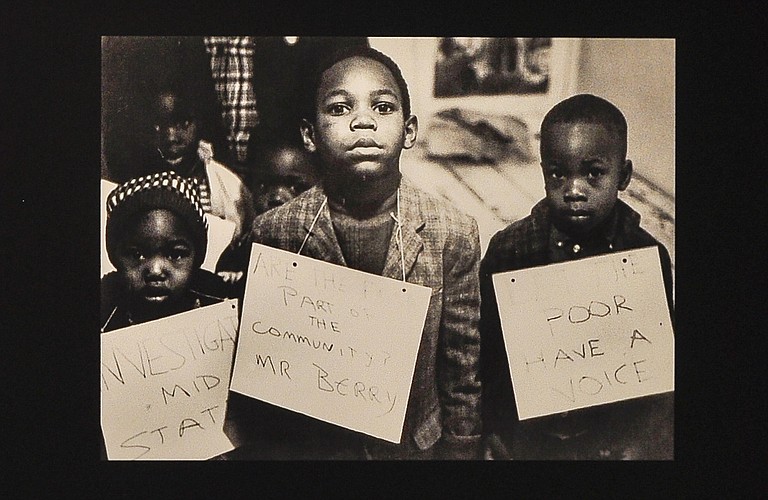 “And the Children Shall Lead Them” runs through Oct. 31 at the Smith Robertson Museum and Culture Center.

Anthony Quinn, 5, dangles, frozen, inches above the ground, clinging to a small American flag. The white man struggling with the black toddler is Hughie Kohler, a Mississippi highway patrolman who had taken Quinn's "No More Police Brutality" sign away moments before.

Matt Herron captured the iconic image in the summer of 1965, but it lives on in the Smith Robertson Museum and Cultural Center's current exhibit.

"And the Children Shall Lead Them" opened June 23 to commemorate the 50th anniversary of Freedom Summer. Curated by museum staffers Charlene Thompson and Kenyatta Stewart, the exhibit displays photos from the Civil Rights Movement, hung side-by-side on white boards over the museum's exposed brick.

The simplicity of the exhibit draws you into the scenes, showcasing Freedom Summer's unsung heroes, many of whom were children. The exhibit is open for public viewing through Oct. 31.

When you walk through the door, the black text on the wall to your right explains the idea behind the photos. It references the "real heroes" that Martin Luther King Jr. mentioned in his letter from Birmingham City Jail—the leaders of the Civil Rights Movement that had no title. Quinn's encounter with the patrolman comes to life in a short film, projected onto the wall to the left.

Quinn, his siblings and his mother were at the side entrance of the governor's mansion on Capitol Street, just blocks away from the museum, protesting the election of congressmen in districts where black people were still unable to vote, when the patrolmen approached.

During the struggle, Quinn's mother, Ailene Quinn of McComb, reportedly told him, "Anthony, don't let that man take your flag!"

His resistance prompted Kohler to pull the flag so hard that he lifted Quinn off the ground. In the following image, the child is crying. Law enforcement arrested Quinn and his mother and took them to the county fairground's cattle stockade, where it held other protesters because the jails were already full.

More than a dozen other images line the walls in the second room of the exhibit. Activists like Stokely Carmichael and James Meredith give Freedom Summer recognizable faces, along with unidentified leaders in Meredith's March Against Fear and the Mt. Zion Baptist Church Freedom School. As in Quinn's photo, the other side of the struggle is pictured as well. A Ku Klux Klan recruitment poster hangs on the wall as it did 50 years ago—a pieced-together image of Uncle Sam in a white hood—and another image shows a man standing on top of his car wearing a rebel-flag shirt.

A few of the final images of the exhibit display the fruits of Freedom Summer's labors. Jo Ella Moore and E. L. Fondren, who was 106 at the time of the photo, register to vote for the first time and celebrate afterward.

Fifty years later, it is easy to idolize well-known civil-rights pioneers. Smith Robertson has created an environment where people are reminded that Freedom Summer was about normal people and their willingness to sacrifice for the progress of Mississippi and its people.