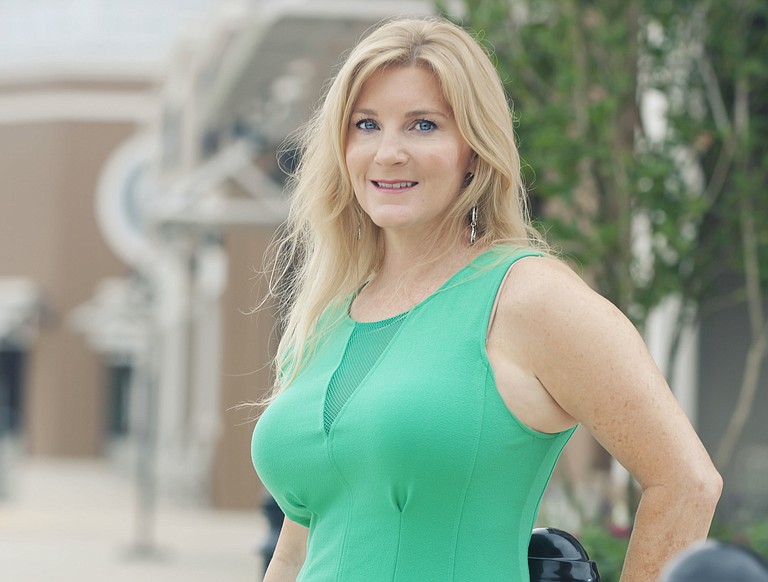 Domestic violence victim Sarah Reynolds uses her experiences to educate others in similar situations and to push state officials to make a change.

She knew it was her only chance to get out, so she crawled toward the back door. "He's screaming at me, but the sound's kind of foggy. It's so surreal," she says. She didn't make it, didn't get out, didn't escape the abuse. And thanks to Mississippi's legal system, five years later, she still hasn't.

Reynolds doesn't fit the stereotype that many people associate with domestic-violence victims.

"I'm the typical northeast Jackson person," she says. "I could be anyone's sister, aunt, mother, daughter." The Waco, Texas, native earned a degree in interior design from Baylor University, where she met her former husband of 10 years, who was in medical school at the time. The couple moved to Jackson 22 years ago. They had been divorced for about two years when Reynolds met her boyfriend.

Her abuser doesn't fit the bill, either—she describes him as a "charismatic, good-looking man." Reynolds was participating in a charity event when he won a date with her as part of an auction. "He sent a business colleague to bid on me," Reynolds says. He had seen her before and knew who she was.

The attack happened Thursday, May 28, 2009, after five years of dating. He had been on a trip for several days and came to her home to see her after she returned from dinner with friends. He had been drinking but didn't appear to be drunk. "I was just trying to make small talk, and he became pretty belligerent," she says.

Reynolds, who had a new job and a particularly busy day planned for Friday, asked her boyfriend to go home, and that's when he came at her. His abusive behavior shocked her, but in retrospect, she can see the warning signs.

"He had a very controlling personality, looking back," she says. "Controlling, very needy at one time, raging (in) anger toward (his) business, and it was never really aimed at me until I told him he needed to leave. It's like it flipped a switch in his brain like, 'No, you're not going to tell me what to do.'"

She faintly remembers two previous encounters with this side of her boyfriend, both driven by jealousy or issues of pride, which she calls his "triggers." The events were short and much less severe. "You do overlook things. You get in a rut where you say, 'This is how life is supposed to be,'" she says.

When Reynolds regained consciousness, he was gone. In a later affidavit, he said that he picked up his things and left. She immediately called her twin sister in Houston, who urged her to call police.

"Nothing was making sense," she says. "I didn't understand, except I kept telling my sister: 'He hit me. He hit me." Reynolds spent the night in the emergency room being treated for her injuries and slept most of the next day. She received an email from him that said, "I'm sorry if I hurt you last night, but you brought this on to yourself."

On Friday, when the police arrived, she asked them to take photos of her injuries. They were not equipped with a camera or able to use their phone cameras, so her friend snapped a picture of her battered face and swollen-shut eye. A kind neighbor, an attorney, drove her to town the following Monday to obtain the first temporary protective order, which her abuser did not honor. The Chancery Court eventually offered her a more permanent restraining order.

Soon after, police arrested and jailed him for simple assault, but the nightmare had only begun. "When he got out, he lawyered up, and he filed domestic-abuse charges against me and had me arrested in my place of business. That's just another form of abuse that the system allows," she says. "(Prosecutors) were representing him, but they kept telling me 'There's no charges; you're not going to be charged with this; please don't worry about it,' and I said, 'But it is worrying me because it's one more thing around my neck, one more abuse that I'm having to endure."

"I've been assigned to two different assistant district attorneys since the time it's been there. I have been 'bumped'... for murderers or more vile offenders," she says. "They're giving me a direct signal that 'If you had died, or if you were in a coma, you'd be more important to us.'"

The grand jury handed down a conviction of felony assault, which is where the case currently stands. "That night, when he attacked me and assaulted me, his main objective was to shut me up, to silence me," Reynolds says. "And he did not accomplish that. I'm here today, I want attention drawn to domestic violence, and I am not going to shut up."

She has received counsel from numerous attorneys to not talk about her situation, but she claims that she has nothing left to lose and is tired of protecting her abuser and the Mississippi legal system.

A part-time Pilates instructor, Reynolds focuses her energy on helping others, especially women who have suffered domestic abuse. "I truly feel like, as horrible as the attack was, it has brought so many good people in my life that I never would have known," she says. "God has given me ... my voice to help other victims."

Much of her work centers on educating the community and pushing for legislation that benefits victims.

"Being a victim, you feel ashamed," she says. "You hear so many times, 'Well, why didn't you just leave?' and that either shows the other person's ignorance or a lack of education of what domestic violence is."

Last year, Reynolds served on Gov. Phil Bryant's Task Force on Domestic Violence, which pushed for House Bill 1030, creating the Office Against Interpersonal Violence. She serves on the advisory board for the office. "I don't plan on stopping talking about domestic violence," she says.

'Those Are My Heroes'

No task is too small for Reynolds, though. She is happy to be able to empower even one woman to have the courage to walk away from abuse. "I know how painful, how scary it is, but those women that do it—leave with nothing on their back, just holding their baby and walking out the door—those are my heroes," she says.

Reynolds plans to help educate those in abusive situations to take the first step toward recovery and to show these women that "they're never alone." Part of what motivates her to advocate for the protection of abused women is remembering the people who sat through trials with her, providing the comfort of having someone in her corner.

Reynolds believes the entire legal system needs to be educated about dealing with domestic violence cases. "There is a face; there is a life behind the name on that file," she says. It starts with training police officers to do things like take photos of injuries, among other simple steps to make the process both more efficient and compassionate. She is hopeful that the task force will push Mississippi in a positive direction on issues such as sexual abuse, human trafficking and other person-on-person violence.

As for her attacker, he still hasn't faced any repercussions. "He's walking around—barely got a slap on the wrist," she says. He is a member of the gym where she works and frequently violates the protective order, an issue that the legal system don't see as big enough to address, she says. "This is my life. There are still stores I can't even go into because I have anxiety attacks, because he's approached me. There are restaurants I can't go into," Reynolds says. What she really wants is closure, "to lock the door, not just close it."