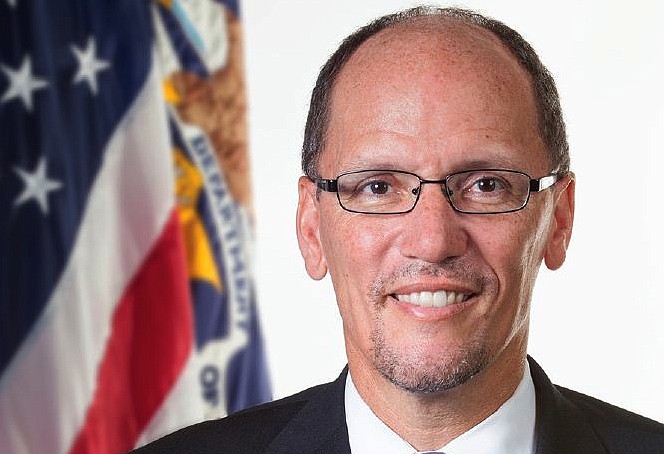 Thomas Perez, Secretary of the U.S. Department of Labor.

Thursday's jobs report from the Labor Department made clear that the U.S. economy is moving steadily closer to full health after having shrunk at the start of the year. Growth is picking up even as many major economies in Europe and Asia continue to struggle. On Thursday, the European Central Bank kept interest rates unchanged despite signs that the 18-country eurozone economy is losing momentum.

Investors appeared pleased by the news. When stock markets opened Thursday, an hour after the government released the jobs report, the Dow Jones industrial average traded above 17,000 for first time. By 10 a.m., the Dow had risen about 65 points.

The unemployment rate dipped last month from 6.3 percent in May to its lowest level since the financial crisis struck at full force in the fall of 2008 with the bankruptcy of the Wall Street firm Lehman Brothers.

"Since February, this has now become a textbook jobs expansion," said Patrick O'Keefe, director of economic research at the consultancy CohnReznick. "It is both broad and accelerating."

Economists say it's too early to tell whether the steady U.S. job gains will fuel more purchases of goods from Asia and Europe and help strengthen their economies. Much of Europe is suffering from high unemployment. And China is trying to manage an economic slowdown and what analysts say was excessive investment in real estate.

The June job gains were widespread. Factories added 16,000 workers, retailers 40,200. Financial and insurance firms increased their payrolls by 17,000. Restaurants and bars employed 32,800 more people. Only construction, which gained a scant 6,000, appeared to reflect the slow recovery of previous years.

Job growth has averaged 272,000 over the past three months. In May, the economy surpassed its jobs total in December 2007, when the Great Recession officially began.

Still, researchers at the liberal Economic Policy Institute estimate that 6.7 million more jobs would have been needed to keep up with population growth.

The challenge is whether the job gains will pull more Americans back into employment and lift wages that have barely budged. Many people who lost jobs during the recession and were never rehired have stopped looking for work. Just 62.8 percent of adult Americans are working or are looking for a job, compared with 66 percent before the recession.

"It's becoming more difficult to find the candidates that we're looking for," said Brandon Calvo, chief operating officer at Cosentino North America, a Houston-based firm that sells quartz, granite and other materials for kitchen counters and bathrooms.

At the same time, that trend has yet to fuel higher incomes across the economy. Average pay has grown just 2 percent a year during the recovery, roughly in line with inflation and below the long-run average annual growth of about 3.5 percent.

The lack of strong wage growth means the Federal Reserve may not feel pressure to start raising short-term interest rates soon as a way of controlling inflation.

"We are still not seeing any significant pickup in wage growth," Paul Ashworth, chief U.S. economist at Capital Economics, wrote in a research note. "We suspect that Fed officials will continue to cling to the view that there is still plenty of slack in the labor market."

The economy actually shrank in the first three months of this year at an annual rate of 2.9 percent. It was the sharpest quarterly contraction since the recession. Ferocious winter storms and freezing temperatures caused factories to close and prevented consumers from visiting shopping malls and auto dealers.

Still, the winter failed to freeze hiring and job growth has continued with little to no interruption. This should help to speed economic growth because more jobs lead to more paychecks to spend.

Most economists say annualized growth is tracking a solid 3 percent to 3.5 percent in the current second quarter. Growth over the course of the entire year should be closer to 2 percent for the entire year, roughly similar to the 1.9 percent increase in gross domestic product achieved last year.

Other than the weak growth at the start of the year, some other signs point to the improving health of the economy.

Auto sales rose at the fastest pace in eight years in June. Dealers unloaded vehicles at an annual pace of 16.98 million last month. Factory orders picked up last month as well, according to a report this week by the Institute for Supply Management.

Home sales also strengthened in May, after having sputtered in the middle of last year when higher mortgage rates and rising prices hurt affordability.