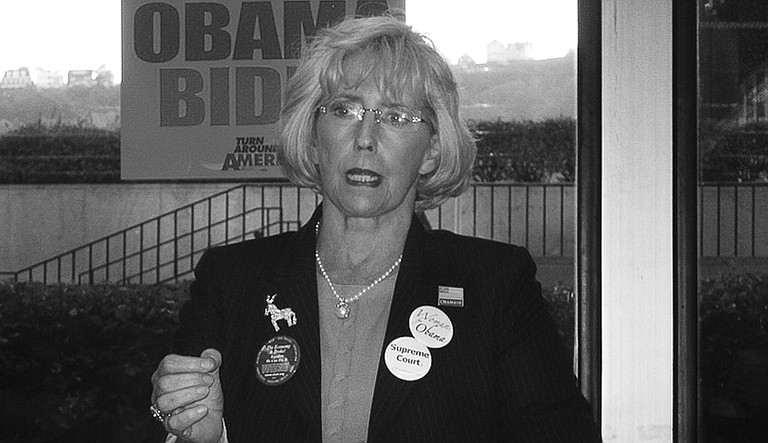 Lilly Ledbetter has recently spoken up to urge the president to take action—possibly to issue an executive order—on the Paycheck Fairness Act, now under consideration in Congress.

Democrats in the state Legislature are advocating a number of bills that put equal pay for women in the forefront.

Rep. Sherra Hillman Lane, a Democrat from Waynesboro who sponsored one of the proposals, said the slate of bills promote families.

"All over the United States there is a gender gap for the same work. When you've got children in the family, that has got to affect you," Lane told the Jackson Free Press this morning.

Five years ago, President Barack Obama signed the Lilly Ledbetter Fair Pay Act into law, the first bill the newly elected president signed. The law removed the short statute of limitations for filing a pay discrimination suit. Ledbetter, for whom the bill was named, has recently spoken up again to urge the president to do more, specifically to take action—possibly to issue an executive order—on the Paycheck Fairness Act, now under consideration in Congress. In an open letter to Obama printed in The Washington Post Jan. 17, she wrote that lawmakers should not "rest on their laurels":

"Since that bill was signed, the president has recommitted to equal pay on all the biggest stages, including in his inaugural and State of the Union addresses. It's great to be reminded that he shares my values. Yet his pledge when he signed the bill—that it was just the first step toward closing the pay gap — has gone largely unrealized."

In Mississippi, House Democrats have authored four bills to legislate fair pay in the Magnolia State, citing the Ledbetter Act and other federal legislation. While the bills focus mostly on closing the wage gap between men and women, HB 1151, "The Family Forward Act," also cites the 1964 Civil Rights Act in addition to other anti-discrimination bills addressing age and disabled people as "bedrock principles of American law" forbidding discrimination.

Lane believes the Mississippi bills represent an extra layer of legal protection. A retired attorney, Lane said the fees to file lawsuits in federal court are too high for most working families and attorneys who do not work for large firms.

Numerous studies show that working women lag behind their male counterparts when it comes to pay. In 2012, the American Association of University Women looked at recent college graduates, for example. In "Graduating to a Pay Gap" the authors wrote: "One year after graduation, a pay gap exists between women and men who majored in the same ﬁeld. Among business majors, for example, women earned just over $38,000, while men earned just over $45,000. ... [G]ender discrimination remains a serious problem in American workplaces."

That study shows that in Mississippi, women make 66 percent of what men make for the same jobs; in Washington D.C., which has the smallest gap, women make 90 percent of their male counterparts, the study shows.

Among the AAUW recommendations are new legislation to "modernize and strengthen" the groundwork of federal equal pay laws.

"We recognize the importance of taking the necessary measures to prohibit and discourage wage discrimination because more households are lead [sic] by women as single parents, who control the financial well-being of their families; which affects the health and well-being of the children of those families."

HB 169, "The Fair Pay Act of 2014," would require employers to pay equivalent pay for equivalent jobs, not discriminating because of sex, race or national origin and to protect employees seeking to enforce equal pay from retaliation from their employers.

HB 197 and HB 193 are similar to the previously mentioned bills, but seek to attach Mississippi's first female insurance commissioner and lieutenant governor, Evelyn Gandy, to the proposed laws.

"In each office to which (Gandy) was elected, she was paid the same as any male predecessor," HB 193 states. "Her achievements are evidence that women are just as competent and effective as men."

Many if not most of women's advocates may think employers are greedy profiteers who'd hire only illegal immigrants for their lower labor cost if they could get away with it. Or would move their business to a cheap-labor country to save money. Or replace older workers with younger ones for the same reason. So why do these same advocates think employers would NOT hire only women if, as they say, employers DO get away with paying females at a lower rate than males for the same work?

Here's one of countless examples showing that some of the most sophisticated women in the country choose to earn less while getting paid at the same rate as their male counterparts:

In fact, no law yet has closed the gender wage gap — not the 1963 Equal Pay for Equal Work Act, not Title VII of the 1964 Civil Rights Act, not the 1978 Pregnancy Discrimination Act, not affirmative action (which has benefited mostly white women, the group most vocal about the wage gap - tinyurl.com/74cooen), not the 1991 amendments to Title VII, not the 1991 Glass Ceiling Commission created by the Civil Rights Act, not the 1993 Family and Medical Leave Act, not diversity, not the countless state and local laws and regulations, not the thousands of company mentors for women, not the horde of overseers at the Equal Employment Opportunity Commission, and not the Ledbetter Fair Pay Act, which is another feel-good bill that turned into another do-nothing law (good intentions do not necessarily make things better; sometimes they pave the way to a worse condition).... Nor will a "paycheck fairness" law work.

That's because women's pay-equity advocates, who always insist one more law is needed, continue to overlook the effects of female AND male behavior: