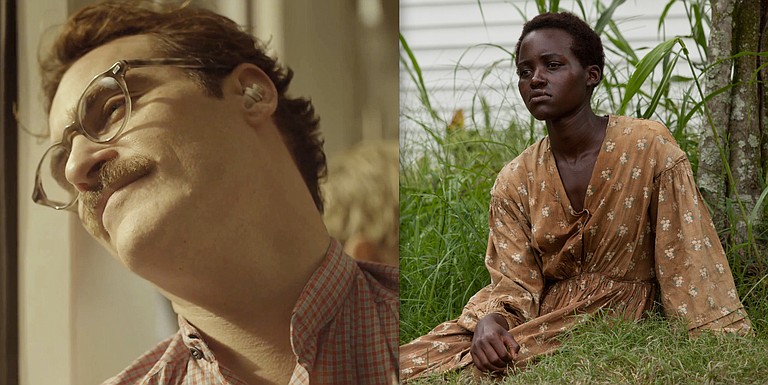 The nine films nominated for best picture at the Academy Awards are "Captain Phillips," ''Dallas Buyers Club," ''Her," ''Nebraska," ''The Wolf of Wall Street," "Philomena," "Gravity," ''American Hustle" and "12 Years a Slave."

The Academy Awards appear to be the three-horse race many expected they would be, with "Gravity," ''American Hustle" and "12 Years a Slave" all receiving a heap of nominations.

The nominations for the 86th Academy Awards, announced Thursday morning in Beverly Hills, Calif., were led by the 3-D space odyssey "Gravity" and the con-artist caper "American Hustle," both with 10 nominations. The harrowing historical epic "12 Years a Slave" trailed closely with nine nominations.

All were among the nine films nominated for best picture. The other nominees are "Captain Phillips," ''Dallas Buyers Club," ''Her," ''Nebraska," ''The Wolf of Wall Street" and "Philomena."

The most notable omission by the academy was Tom Hanks, whose lead performance in "Captain Phillips" was widely considered a shoo-in. It was a particularly surprising snub since Hanks is widely beloved by the academy, having been nominated five times previously, winning for "Forest Gump" and "Philadelphia."

Robert Redford, expected by many to be nominated for the shipwreck drama "All Is Lost," also missed out on a best actor nod. Redford has never won an acting Oscar.

The 77-year-old Dern is an Oscar nominee for the second time, 35 years after his nomination for Hal Ashby's "Coming Home." Few have taken more pleasure in awards season than Dern, revitalized by a film he's happily viewed, he estimates, "approaching the upper 30s."

"I can't see it enough to realize how lucky we all were with the collaboration that went on on this particular movie," said Dern. "I feel somehow that the industry has suddenly today put their arms around our little movie."

With her nomination, Streep pads her record for most acting nominations. This is her 18th nod, including three wins, the last for 2011's "The Iron Lady."

But many enjoyed their first Oscar nomination Thursday, including Ejiofor, McConaughey, Michael Fassbender ("12 Years a Slave"), McQueen, Barkhad Abdi (a limo driver before being cast in "Captain Phillips") and Jared Leto, who had devoted himself to music before returning to play a transsexual in the Texas HIV drama "Dallas Buyers Club."

"Yesterday I was doing jury duty, today I woke up with an Academy Award nomination," said Leto. "Only in America."

David O. Russell's Abscam melodrama "American Hustle" has ridden a wave of enthusiasm for its manic performances, all draped in thick 70s style. It's a success for director David O. Russell (who received his third directing nomination) just a year after his "Silver Linings Playbook" was feted with eight Oscar nominations, with Jennifer Lawrence winning. She was again nominated for "Hustle."

Martin Scorsese's "The Wolf of Wall Street" came into Thursday as one of the biggest question marks of an awards season that has often left many guessing. The nearly three-hour Wall Street extravaganza of money, sex and drugs became a lightning rod of debate, with many questioning whether it glamorized the infamous trader Jordan Belfort.

DiCaprio, who had spent years trying to get the film made, called it "a passion project of mine" and said his role as Belfort was "one of the most challenging and rewarding of my career."

One of the day's biggest winners was the 27-year-old producer Megan Ellison, the daughter of billionaire Larry Ellison. Her Annapurna Pictures produced two of the best-picture nominees ("American Hustle" and "Her") as well as the Wong Kar-Wai martial arts drama "The Grandmaster." She celebrated by tweeting "17!" — the total nominations her films received.

Though much of awards season had played out between favorites "12 Years a Slave" and "American Hustle" (both best picture winners at the Golden Globes on Sunday), the global box-office hit "Gravity" emerged Thursday thanks partly to its strength in technical categories like cinematography, production design, editing and visual effects.

Alfonso Cuaron's innovative depiction of being lost in space has been hailed for reinvigorating the spectacle of the big-screen experience. Having taken in more than $670 million worldwide, it's easily the most popular of the best-picture nominees.

Though historically the most-nominated films have taken home best picture, that's not been the case in recent years. In six of the last 10 years, the most-nominated film hasn't triumphed in the end, including last year when Steven Spielberg's "Lincoln," with 12 nominations, was beaten by Ben Affleck's "Argo."

The Coen brothers' folk tale "Inside Llewyn Davis," one of the most critically acclaimed films of the year, garnered only nominations for cinematography and sound mixing. And while 2013 was trumpeted as one of the best years for African-American cinema, movies like "Lee Daniels' The Butler" and "Fruitvale Station" weren't nominated (including Oprah Winfrey's performance in "The Butler").

This year's Oscar telecast on March 2, with Ellen DeGeneres hosting for the second time, has particular pressure on it to live up to the increasingly popular Golden Globes. With hosts Tina Fey and Amy Poehler, ratings for the Globes have increased the last two years and drawn good reviews. The Academy Awards have meanwhile struggled to freshen up its more prestigious brand.