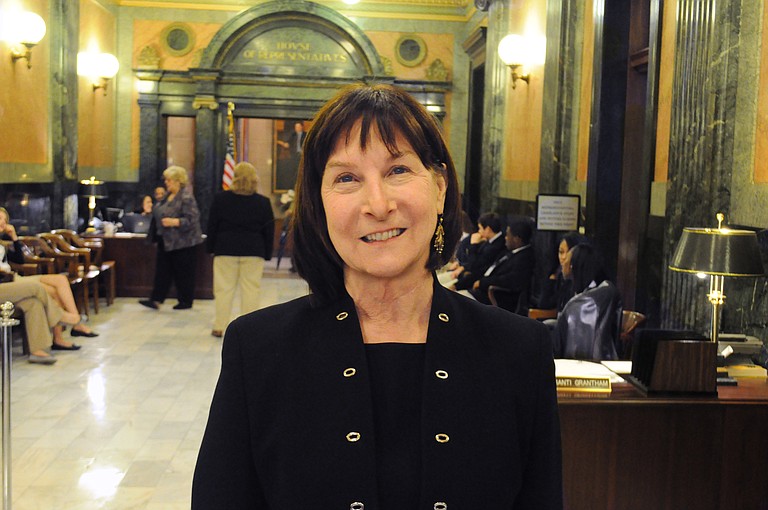 Linda Whittington, a Democratic state House member from Schlater with a keen interest in public schools and education, agrees with Brown regarding diverting funds from MAEP. Photo by Trip Burns.

Sometimes, an innocuous-sounding label can hide a potentially insidious purpose. Take “compassionate conservative,” a term that former President George H.W. Bush (Bush senior) used often. These days, even conservatives confine the term to the political oxymoron dustbin. Bush was actually talking about a version of “tough love” that would largely leave the needy to fend for themselves instead of providing aid. By most definitions, it had little to do with compassion.

The statute the bill proposes to change contains the rules for MAEP, including how the Legislature should calculate funding for school districts. Under the heading “Computation of the required state effort in support of the adequate education program,” full funding of the formula is the basis, and increases “shall be not less than eight percent (8%) in excess of the amount received by said district from state funds for the fiscal year immediately preceding.”

Of course, the Legislature has fully funded the formula only twice since passing the law in 1997. Its authors meant MAEP to provide level funding for all public-school districts across the state, which could substantially improve schools in poorer districts throughout Mississippi—districts where available property-tax revenues often leave students lacking for teachers, building maintenance funds and basic supplies, including textbooks.

Since 2008, shortchanging the formula has cost Mississippi schools $1.3 billion, and every district in the state has felt the effect—even relatively prosperous districts such as Clinton, and Madison and Rankin counties. Districts have fewer teachers, overcrowded classrooms, and some can’t afford building maintenance.

For the current school year, Mississippi’s per pupil spending is $648 lower than it was in 2008, reports the Washington, D.C.-based Center for Public and Policy Priorities. The cuts deepened the recession, slowed the recovery and will make Mississippi less prosperous in the future, the report said.

For the Jackson Public Schools district, the MAEP shortfall totals $74,695,646.

Nancy Loome, president of the Parents’ Campaign (a Jackson-based organization that supports public schools), said that Tollison’s bill has the backing of the lawmakers heading up the education committees in both chambers of the state Legislatures.

“Both chairmen say that (they) support a move to funding based on enrollment versus attendance,” Loome wrote in an email about the bill to Southern Echo, a non-profit that seeks to empower African Americans leadership in rural areas of Mississippi (which includes the overwhelming majority of the state). Last year, Loome came out in support of school choice, including charter schools, if the state held all schools to the same standards.

Tollison’s bill does not seem to incorporate any mention of “enrollment versus attendance,” but it does remove any mention of “full funding” from the relevant section of the law. It changes the increase basis to the amount a district received in the previous year, and reduces the increases to “not less than” 6 percent in 2015, 4 percent in 2016 and a mere 2 percent in 2017. The senator insists the bill applies narrowly to only 10 public-school districts where student enrollments have dropped, but are still receiving increases under MAEP.

Sen. Tollison did not return calls for this story.

State Auditor Stacey Pickering, also a Republican, was at the forefront of a push last year to discard MAEP altogether, and his office drafted Tollison’s bill. In a letter to the governor and key Republican lawmakers dated Feb. 4, Pickering said he could not certify MAEP “again this year because the data used by the (Mississippi) Department of Education is not accurate and unreliable.”

Pickering could verify the data if he wanted to, said Rep. Cecil Brown, D-Jackson, former chairman of the House Education Committee, but Brown doesn’t see the auditor having the will to do so. Instead of tasking MDE to ensure its data is accurate or finding a way to verify the data, Pickering’s solution is to change the MAEP formula.

Pickering spokesman Brett Kittredge said, if passed, the law would help with some of the issues Pickering has raised.

Two other education bills under consideration in the Senate Education Committee amount to “vouchers by another name.” Both propose to extend tax credits to parents or guardians who choose to enroll dependent children in “qualified private schools or homeschool programs.”

The bills are virtually identical except for the tax-credit amounts. The credit in SB 2749 amounts to $5,000 for each child in such schools. SB 2280 proposes a credit of $1,000 per child.

Such credits would only benefit households with enough income to itemize deductions on their state income-tax returns. They would exclude most low-income households, especially the 24.2 percent of Mississippians whose incomes are below federal poverty levels. It’s highly unlikely that those households would itemize deductions because they would not owe taxes to apply those tax credits.

Rep. Brown called the bills “problematic,” and said that the only way he would not object to them is if the Legislature provides rebates to all parents instead of tax credits. Generally, however, he objects to any funding bill that could divert money from MAEP, which these bills have the potential to do.

Linda Whittington, a Democratic state House member from Schlater with a keen interest in public schools and education, agrees with Brown regarding diverting funds from MAEP.