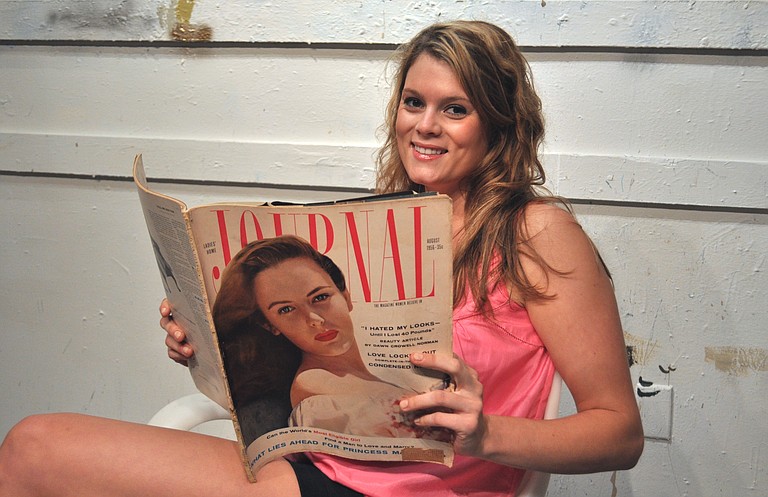 Attempting to represent a whole community with a single book is an ambitious goal, but Jackson native Nell Knox seems prepared for the task. With her first book, "Studio Jackson: Creative Culture in the Mississippi Capital" (The History Press, 2014, $22.99), Knox combines her education, personal connections and love of reporting and art into the most definitive look at Jackson's creative culture yet.

While "Studio Jackson" hit stores in mid-November, Knox began learning the skills she would need for the project in 2011 while she completed her graduate program in southern studies at the University of Mississippi. In the program, she interned at the Mississippi Department of Archives and History and learned about oral history—an experience she would later use in writing the book—but it wasn't without challenges.

"I was driving to Ole Miss for a class once a week," she says. "I was ready to get out and start working, and I was broke. So, my inspiration was desperation."

Knox tried her hand at freelance writing, taking assignments from local publications such as Mississippi Encyclopedia, Millsaps Magazine and Portico Jackson. The latter gave her an opportunity to cover local artists for the first time, including Fletcher Cox and Andy Young. While working for these periodicals helped Knox to hone her talents, she wondered if writing a book would be more rewarding.

"Writing is so tricky with nonfiction. There's this desire I have to report what's going on, but to do it in a way that maybe lasts a little bit longer," she says. "Like, I'd write magazine articles, and they'd get published, and then a year later, that's kind of finished."

During that time, Knox also met Jackson mixed-media artist William Goodman, who she married in June of this year. Their relationship placed her in close proximity to Jackson's art community. Watching collaborations between artists that might see each other as rivals elsewhere helped Knox see the potential for a story.

"It's a really great thing that we've got an art community that connects so much," she says. "I think in bigger cities, from my observation, it's a lot more 'every man for himself.' ... In a city the size of Jackson, there's a community that forms that's more supportive than competitive."

Knox's friend and former Lemuria co-worker Ellen Rodgers Johnson, a professional photographer in Jackson, was the final piece of the puzzle. When Johnson expressed an interest in teaming up on a project, "Studio Jackson" truly took form. Johnson and Goodman were able to provide the much-needed network for Knox to actually put pen to paper.

"It was really great because some of these artists I didn't know really well, and I was able to forge these connections because William has been her for much longer than I have," she says.

Since the release, Knox has been in a constant stream of book signings and interviews, which hasn't left much time to think of the future, though the community's reception of "Studio Jackson" certainly leaves her open to the idea of a sequel.

*This story has been edited to include changes. Nell Knox actually learned about oral history with the Mississippi Department of Archives and History, not documentary filmmaking. Knox covered artists such as Andy Young, not Andy Hilton. Jackson Free Press apologizes for these errors.