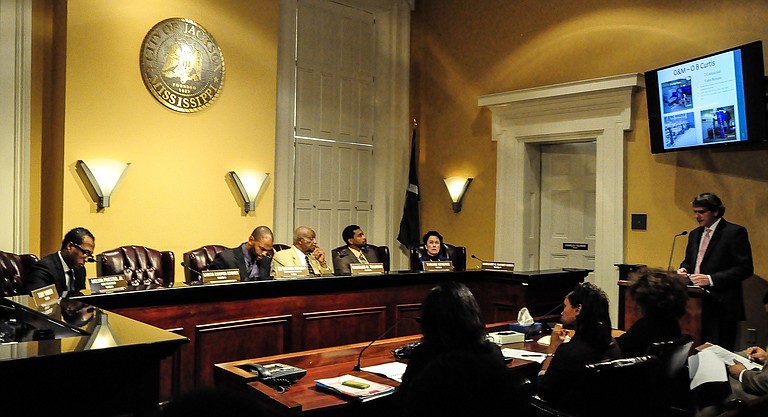 Mark Inbody of Siemens and Mitch King (pictured speaking at podium) with sub-contractor Garrett Enterprises ECI—the firm founded by businessman Socrates Garrett, who is now retired—fielded questions from the council. The representatives said that so far, 27,238 residential and 778 commercial meters have been installed. Photo by Trip Burns.

The Jackson City Council approved a $7,200 pyrotechnic display for Thalia Mara Hall for New Year's Eve. But the real fireworks came later on in the meeting, when the council received one of its most comprehensive public updates about the ongoing water-meter installation project that's part of a $90 million contract with Siemens AG and a number of Jackson-area subcontractors.

The project involves the installation of more than 65,000 new digital water meters that are supposed to increase the city's water revenue by more accurately calculating homes' waterpo use.

Mark Inbody of Siemens and Mitch King with sub-contractor Garrett Enterprises ECI—the firm founded by businessman Socrates Garrett, who is now retired—fielded questions from the council. The representatives said that so far, 27,238 residential and 778 commercial meters have been installed.

Council members had pointed questions about complaints coming from customers about unusually high water bills. Siemens representatives explained that some of the problems stem from faulty installation and calibration or computer glitches.

Additionally, the slow pace of the installation of a new billing system also drew rebuke. James Covington of iVision IT Consultants explained that the city lacks the staff to properly implement a project of this magnitude.

Kishia Powell, the city public works director, said that members of her staff have pulled double duty, dipping into the overtime budget, in performing their normal job functions in addition to helping migrate to the new billing system.

"This is what keeps us up at night," Ward 2 Councilman Melvin Priester Jr. said during the meeting.

The sometimes-tense exchange between city officials, which included council members as well as Public Works Director Powell, took place against the backdrop of a rumor mill that is running overtime about possible probes of city contracts.

After a slight hesitation, Ward Councilman Tyrone Hendrix flatly asked the question that seemed to be on everyone's mind: "How did this project get to be $90 million?"

Inbody and King stressed that they were not involved in the early negotiations between Siemens and the administration of Harvey Johnson Jr., who first brought the deal to the council in late 2012.

The representatives added that the scope of the contract shrank before Johnson signed the final documents in 2013, but that information seemed to blindside the council.

Just before the meeting concluded, a group pushing for a human-rights charter in Jackson staged an impromptu demonstration when council members declined to let organizers address the meeting.

The group had been told that public comments are not allowed at special meetings, but they chose to show up anyway.

Adofo Minka, an attorney with Cooperation Jackson, said it was important to speak at the meeting given national conversations about human rights in the wake of such protests over the deaths as Michael Brown, Tamir Rice, Eric Garner and others.

When council President De'Keither Stamps said it would be improper to allow the group to speak, its members held up signs containing phrases such as "Historically Discriminated Against Minorities," "Women," "Cultural Rights," "Indigenous People," "LGBTQI" and "Worker's Rights."