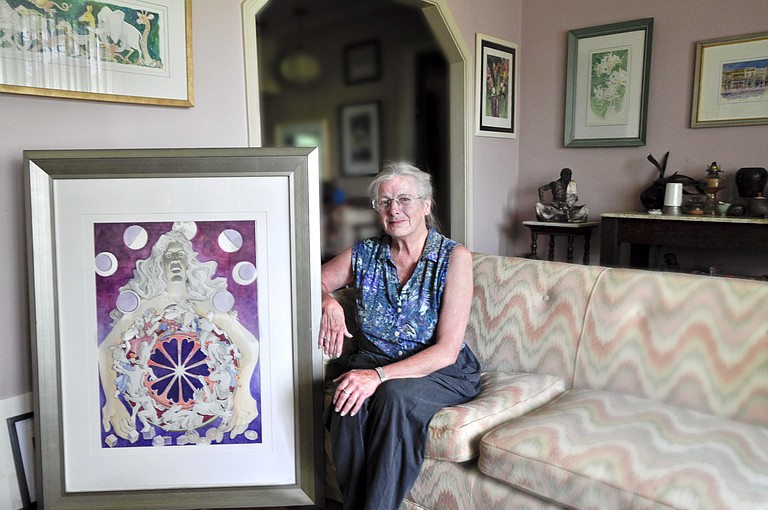 Patti Henson puts a little bit of herself into every piece she crafts. Her vivid watercolor paintings, fascinating fabric-batik pieces, and clever logos, drawings, and designs are sprinkled across the globe in different collections as far as New Zealand, Spain, France and Belgium, and as near as Jackson.

Henson says she has loved art for as long as she can remember. "It's just sort of an extension of me," she says. "I can't remember a time when I didn't have a pencil or paintbrush in my hand. Even if I'm not getting to paint or work on any major piece of art, I don't go anywhere without a sketchbook."

Henson's uses of drawing, fabric-batik, block printing and painting with watercolors give her a chance to visualize her creative thoughts. "I've done everything from logos, and screen-printed T-shirts and illustrations for books, to still life to landscapes to animals to people and patterns," Henson says.

A graduate of Mississippi University for Women in 1974, one of Henson's first jobs was as a graphic artist at Good Earth Graphics, a locally owned T-shirt shop in Jackson at the time. Henson says that it closed around the late '70s and early '80s.

Henson's portfolio of T-shirt screen-printing designs over the years include works for the Jackson Zoo, the American Civil Liberties Union and the Mississippi Forestry Commission, to name a few. Her fabric-batik designs are vibrant and colorful, with intricate patterns, shapes and designs blended together to produce a beautiful work of art.

She repeats the steps until she gets the finished product she wants.

After a vacation in 2004 to the Island of Roatan in Honduras, Henson says that she began painting with watercolors.

"Of course, (the island) was just spectacularly beautiful," Henson says. "So when I got back, the printmaking process was pretty slow. You have to carve a block, then ink it, and that takes a while. Fabrics were also a pretty slow process.

"I wanted something more immediate to capture the islands, so I started playing with watercolors."

As a founding member of the Craftsmen's Guild of Mississippi, Henson also says she loves to see progress and growth in the organization.

With only about a half dozen members at the time she joined, Henson says she can remember little shows around town. One of the more memorable spots was under a parking lot in a little building at Millsaps College. Now, the organization has more than 300 members from across the country.

Henson, who is the daughter of commercial artist Walter Henson, also has a sister, Sandra Henson-Pickering, who is an artist as well. Henson says that when she is not creating art, she lends a hand to help care for her elderly parents.

Yet when she does get back to her canvas and brushes, fabrics and colors, she plays some jazz, maybe Miles Davis or John Coltrane to set the tone and focus in on her work.