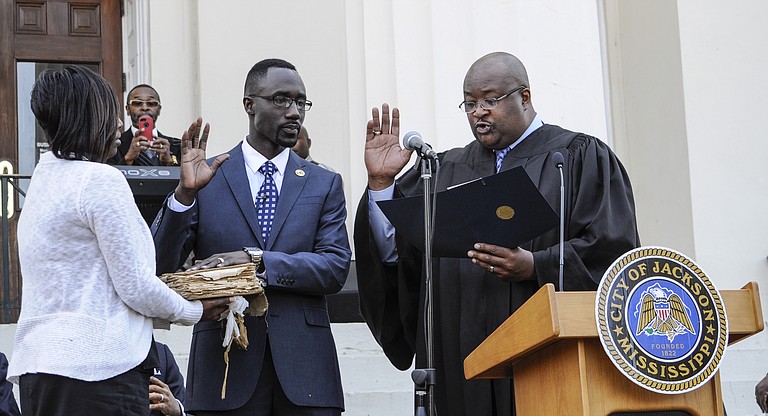 At 10 a.m. on April 24, 2014,, in Josh Halbert Gardens on the west side of City Hall, Hinds County Justice Court Judge Frank Sutton administered the oath to Tony Yarber after remarks from Charles Tillman, the Ward 5 councilman who filled in as mayor after Lumumba's death, and a prayer from Rev. C. J. Rhodes. Photo by Trip Burns.

Tony Yarber is Jackson's second mayor in less than one year.

At 10 a.m. today, in Josh Halbert Gardens on the west side of City Hall, Hinds County Justice Court Judge Frank Sutton administered the oath to Yarber after remarks from Charles Tillman, the Ward 5 councilman who filled in as mayor after Lumumba's death, and a prayer from Rev. C. J. Rhodes.

Yarber, who previously held the Ward 6 City Council seat, thanked his family and supporters for bearing with him throughout the election season. He addressed members of the City Council, promising that he will continue to foster a working relationship with them and relay information they will need to make decisions.

"The beauty of government is that you don't always have to agree, but you have to always know that people are fighting for the people who sent them there," Yarber said. "So, while we may not always agree, I respect you, and I appreciate you, and you'll see that from that mayor's seat. You'll never be out of the loop."

Yarber also took a moment to celebrate the life of the late mayor, whom he has called a father figure, and to commend Lumumba's son for being a formidable opponent during the election.

"We are here today because of a great man by the name of Chokwe Lumumba, and in a lot of ways Chokwe Lumumba taught me some things about being a man and about being a father. We saw that in the courage that his son, Chokwe Antar Lumumba, showed in this race," Yarber said.

Yarber spoke about his plans to honor city workers, ensuring them the best working conditions. He addressed the citizens of Jackson, promising to run an administration that is fair, firm, and consistent and to do his best to take care of the local business owners of Jackson. He also promised that his top priority is the improvement of the City of Jackson's Planning Department.

"In the next two weeks, we will be formulating plans and working together on Council to determine how we will best situate our city to be well on its way to becoming the greatest city in the United States of America," he said.

That transition could be rocky, however. Wednesday morning, several mayor's office employees could not gain access to parts of city hall.

Kali Williams, whom Lumumba appointed as a grant writer and external funding officer, said he received a phone call at around 9 a.m. from fellow staffers who said their Jackson Police Department-issued security badges did not work.

When he arrived at city hall just before 10 a.m., Williams found that his security badge didn't work at the employee entrance on the west side of city hall or at the mayor's office on the third floor.

Williams, who started working for Lumumba shortly after he won election last summer, said it was common for City Hall employees to have access to the building long after they had been terminated.

"Ours being deactivated within 24 hours, and without the election being certified, somebody did that intentionally," Williams said this morning.

A call and email to JPD public-information officer Colendula Green was not returned by press time. Dr. Safiya Omari, Lumumba's chief of staff, told WJTV's Ross Adams, who broke the story Wednesday, that three to four employees were affected.   "I'd like to think it was just a bureaucratic snafu, but until people get back, you can't say for sure," Omari told Adams, who reported that Yarber did not know why the badges were shut off and that Synarus Green, the city's chief administrative officer, helped Yarber gain access to the mayor's office.

In the meantime, Williams, who is also one of the organizers of the Jackson Rising New Economies Conference, said Yarber seems to have a good relationship with Omari, but that the level of city support the May 2 conference will receive from Yarber's administration remains unclear.

Because Lumumba had sanctioned the conference, much of the planning took place in City Hall, but Williams said organizers are looking to relocate, possibly to a local church.

For his part, Yarber has vowed to continue Lumumba's work to unite the city and do away with the stigmas pertaining to crime, infrastructure, and health that Jackson and the state have accumulated over the years.

"We are Jackson, Mississippi," Yarber said. "We are the capital city of Mississippi. Failure is not our option. We shall rise above degradation. Crime will not be our staple, but we shall be a city that loves on each other."

This part of the story is surprising and hopefully inaccurate: "Williams, who started working for Lumumba shortly after he won election last summer, said it was common for city hall employees to have access to the building long after they had been terminated."

With most companies it is the standard operating procedure that an employee's swipe card, email, passwords, etc, are deactivated on the day they retire, are terminated, or if there is a change of management. Failing to do so would be a very sloppy way to run a business, or in this case, a government office.

I believe Mr. Williams came here from California to work for the late Mayor. He would not have any firsthand knowledge of how transitions are effected in the Mayor's office. This is actually standard protocol as it should be. Appointed employees understand they are temporary employees and as such when administrations change they are usually replaced with personnel of the new Mayor's choosing as with the President's Cabinet. Whining and calling the press was pretty tacky in my personal opinion.

The People have spoken.... It is now time for us to come together and rally behind Mayor Yarber and remember our obligation is to Jackson Mississippi not one individual. No matter who is in office, it cannot be done without the help and will of the everyday people that live in Jackson Mississippi. The people believe that Yarber's leadership is the direction we need to go.

It will take the people within the city to make a difference. To my surprise, Mayor Yarber is the first Jacksonian to ever be elected to this office. Could our past failures be that too many outsiders have been running this city?

And nobody can take care of home like one that was born and live there. Jackson is Yarber's home so there is none that will take of home like a this Jacksonian.

I sincerely hope you are right although over 60% of the African American community voted for Lumumba. Centainly NOT a landslide or a compelling victory. Lumumba just couldn't overcome that northside landslide. Wonder why! There is a stark difference of opinion about Yarber's win when you talk to people outside of Mississippi. They've seen the videos and heard the explanations for "man tips" and "duck lips". There is NO GOOD EXPLANATION FOR EITHER AND IT WAS AN AFRONT TO THE HERITAGE OF SO MANY HEROES AND HEROINES OF MISSISSIPPI. THEY DESERVED BETTER. Many supporters stated that it was a joke and they considered it funny - so was Step and Fetchit coonery at one time funny to "US". Sad that it still is!!

Black people continue to be duped by the powers that control - every time we get the opportunity to empower ourselves, to move beyond the status quo and the remaining vestiges of institutional racism, some of us lose faith and revert to what we've been taught to accept - same old bondage and coonery under a new name. Same guys reaping the benefits - all you have to look at is who financed Yarber's election. NO ONE puts that kind of money down without expectations of control. Jackson has a 2020 Plan. Its been in existance for years and has been slowly BUT STRATEGICALLY moving forward to regain control. IT'S CALLED GENTRIFICATION. There are ALWAYS the "SAME FEW" African Americans that will benefit but the overwhelming majority will continue to lose. If I'm wrong, I'll be the FIRST to apologize. It will be unexpectantly wonderful and it is my sincere prayer that I am.

HOWEVER, THE TRUEST GAGE OF FUTURE BEHAVIOR IS PAST BEHAVIOR. I sincerely hope I am proven wrong.