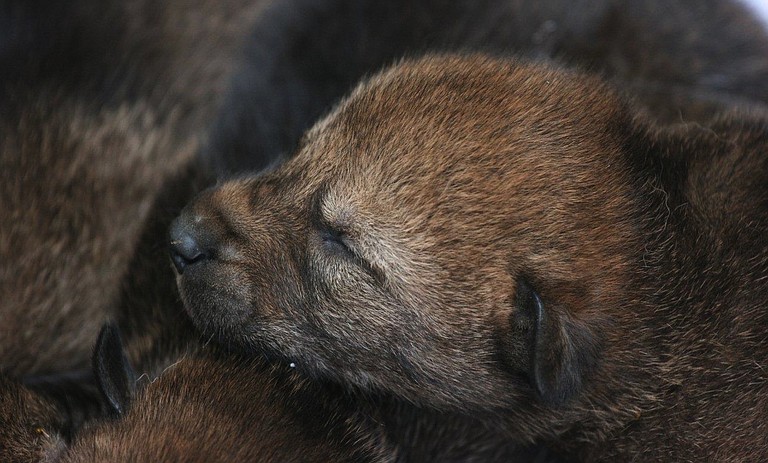 If you follow the Jackson Zoological Park's Facebook page, you probably saw a photo that captured the attention of every Jackson Free Press staff member last week. The zoo's red wolves Kanati and Taladu had a litter of eight healthy pups March 30. Deputy Director Dave Weztel said in a release that they weighed in at a little more than a pound each.

Taladu is Cherokee for cricket, and Kanati is named for the first man and hunter in Cherokee folklore.

On April 8, the zoo posted #TuesdayTrivia, asking people to guess which animal just had babies. The clues were that the animal is highly endangered, is found in the U.S., has repopulated from just 14 and is cute. The answer, posted at 3 p.m., was, of course, the red wolf pups.

The red wolf and the gray wolf are the only two species of the animal that live in the U.S. Red wolves are much smaller, with a gray-black coat that has a reddish tint. They are one of the most endangered species of wolf in the world, with little more than 300 in the U.S., most of which are in captivity.

The United States Fish and Wildlife Service declared red wolves an endangered species in 1973 and then made efforts to gather as many of the animals as they could to repopulate in captivity. In 1980, Fish and Wildlife Services declared the species extinct in the wild. In 1987, the captive population was high enough to begin restoration at Alligator River National Wildlife Refuge in North Carolina. Today, more than 200 are in captivity, and more than 100 populate the wild.

The Endangered Species Act classifies red wolves as endangered, and the International Union for Conservation of Nature classifies the species as critically endangered, with more than a 50 percent chance of becoming extinct within the next 10 years.

This new litter of pups at the zoo provides a ray of hope for further conservation of the species.

"These wolves are highly endangered, and so, there's a chance that as these wolves are bred in captivity, they'll actually be re-released into the wild," said Lucy Barton, Jackson Zoo public education and public relations manager. "We're very excited to be a part of that whole conservation process."

Jacksonians can also help with the conservation effort for red wolves by simply going to the zoo. Twenty-five cents of zoo admission goes toward the patron's project of choice, from helping the zoo with its Raptor Rehab program—where zoo veterinarians rehabilitate raptor birds such as hawks, vultures and eagles—to donating to its green practices project, or to the Red Wolf Coalition.

This is the second litter for Taladu and Kanati, though the previous litter had to be raised by zoo veterinarians in a separate enclosure due to a disease the animals contracted. In the new litter, the wolf couple had three boys and five girls.