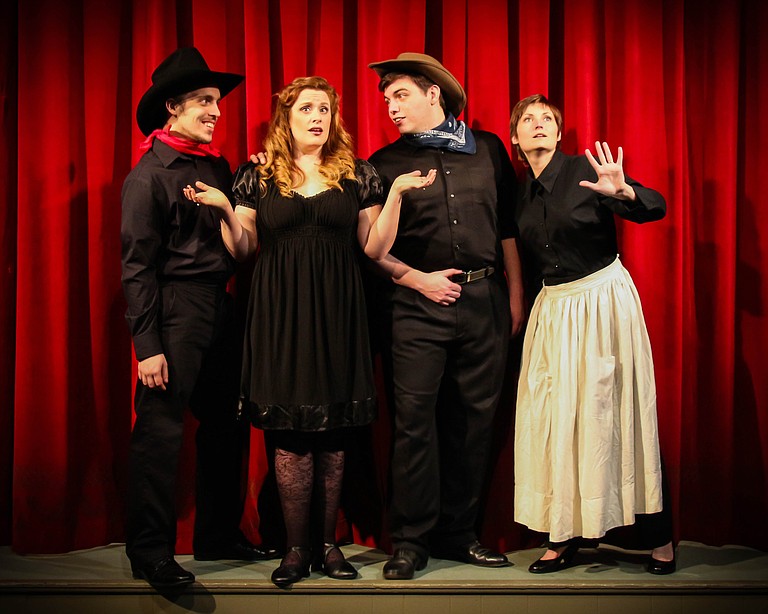 The Unframed series at New Stage Theatre offers quirkier, more controversial or offbeat modern fare to balance the selections in the Main Stage season, such as the recent “Musical of Musicals.”

Confession: Since childhood, I've had a fantasy in which I imagine my life as a musical. Perhaps I watched Rogers and Hammerstein's "Cinderella" one (or 100) too many times. Well, that and "Mary Poppins" and "South Pacific" and "Hello Dolly" and "Grease" and ... and ... and. Whatever the reason, to this day, when I'm going through a hard time or when something really good happens, I imagine myself and the people around me spontaneously bursting into song and dance.

Needless to say, I'm one of the millions who enjoyed the recent animated musical box-office phenom that is Disney's "Frozen." (Without a prop kid to take, I abandoned any pretense of embarrassment, and my grown lady self went with my parents.) Disney movies are always a good time, but when it comes to musicals, to me, there's really nothing that compares to a live theater performance.

And for live theater, we're lucky to have a jewel here in Jackson in New Stage Theatre (1100 Carlisle St., 601-948-3533). This is my first year to have season tickets, and every show impresses me with the level of talent, from the actors to the sets and staging to the costumes. But in addition to its Main Stage subscription series of plays, New Stage offers other chances to enjoy less traditional theater. Recently, much to my delight, two involved musical experiences.

The theater's Unframed series of plays is a second (non-subscription) season of cutting-edge works that local actors typically perform at the Warehouse Theatre on Monroe Street. In addition to featuring interesting plays, this series is affordable ($10 a performance) and at the Warehouse Theatre, you can enjoy beer or wine from the concessions while you watch.

When I heard the most recent Unframed show was called "The Musical of Musicals: The Musical!" I needed no more convincing to attend. It's a satire in which, over five acts, five actors perform the same story in the style of five different musical masters ranging from Rogers and Hammerstein to Andrew Lloyd Webber (the most hilarious act, in my opinion). As I've come to expect from New Stage, the actors delivered outstanding performances, and I left wanting more.

Luckily, the following week brought the annual New Stage fundraising event at the Fairview Inn, and the theme this year was Broadway. Over dinner, New Stage performers wandered among the tables singing beloved songs from musicals old and new. The ladies at my table (myself included) kept finding ourselves lip syncing along, while our male companions, bless their hearts, looked at each other with bewilderment.

So at least for now, my need for musical theater is satiated, but I can't wait to enjoy more from New Stage. Their next production isn't a musical, but sounds like a lot of fun: Beth Henley's play "The Miss Firecracker Project" runs April 15-17 on the Main Stage. This season offers one more chance to enjoy some song and dance with its final play, as "Shrek The Musical" rounds out the season May 27 through June 8. As for the Unframed series, which I highly recommend, you can look for it on Facebook, or visit newstagetheatre.com, for updates and  upcoming performances.