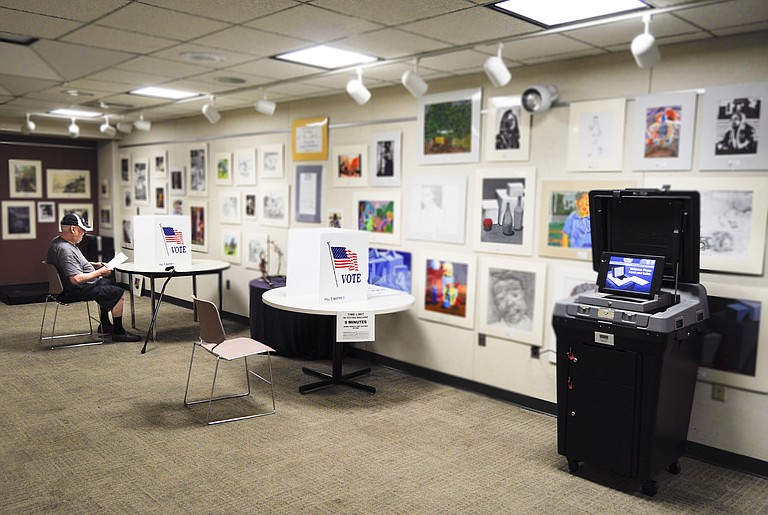 Because today is a Election Day in the city, a few big questions hang over the campaigns. Polls close at 7 p.m. If there's a runoff, it'll take place on April 22. Photo by Trip Burns.

Ever since the removal of a mural painted in tribute to late Mayor Chokwe Lumumba last Thursday, wide speculation has swirled about who pulled the trigger to have the painting removed and why.

Buzz on social media is that the individuals with the most juice to have the city's Parks and Recreation Department take the mural down in a jiffy are sitting council members, three of whom are vying to be the next mayor.

City Council President and Ward 2 Councilman Melvin Priester Jr. told the Jackson Free Press this morning that rumors that he complained about the mural are "absolutely false." Priester also said that he had a lot of respect for the Lumumba family since he grew up down the street from them in northwest Jackson.

Ward 7 Councilwoman Margaret Barrett-Simon said that she never knew the mural existed, let alone had anything to do with it being taken down. "I don't even know where you get this stuff," Barrett-Simon snapped when contacted by a reporter via phone.

Ward 6 Councilman Tony Yarber declined to comment about whether he thought the mural being taken down was appropriate. However, he said that anyone who suspects a City Council member authorized that the mural be taken down obviously doesn't know how city government works.

It's unclear who gave the order to have the mural covered. Calls to Parks Director Allen Jones and Chief Administrative Officer Synarus Green have not been returned. Nor have city officials responded to a public-records request seeking copies of the alleged complaints. Acting Mayor Charles Tillman issued a statement in which he reaffirms the city's respect for the late mayor.

"It came to our attention that one of our city-owned parks had been painted with certain words, slogans, and designs that had not been authorized or permitted by the City. Consistent with our policies and City ordinances, the painting was removed," Tillman wrote.

"In continuing our quest to honor the memory and legacy of our late Mayor, our actions, in this instance, were in keeping with Mayor Lumumba's high moral and ethical standards that we were fortunate to experience."

Reached by phone April 4, Ward 4 Councilman De'Keither Stamps said he does not know who complained about the mural to get it brought down, but that Tillman likely felt the city should remove it as a precaution ahead of what could be a tight and potentially testy special election.

"We need to do everything to not be another Hattiesburg," Stamps said, referring to the 2013 Hattiesburg mayoral election that was entangled in court challenges and allegations of impropriety before incumbent Mayor Johnny Dupree re-won his seat over the challenger.

"We shouldn't have been in this place. I don't think this (the mural) was a big enough issue to be contested," but someone could have used it to demand another election, he added.

Because today is a Election Day in the city, a few big questions hang over the campaigns. Polls close at 7 p.m. If there's a runoff, it'll take place on April 22.

1. How will money influence the race?

The conventional wisdom says that municipal elections, particularly in Jackson, don't draw a lot of attention. And, therefore, a special election will draw even less. In most years, the conventional wisdom might be correct. But these are unusual circumstances and a review of campaign-finance reports demonstrates that there's plenty of interest in this election.

So far, donations, all of which have poured in a month's time, have topped $610,000 to date. The money leaders are:

That Lumumba leads the money race in and of itself is surprising. In last year's mayor's race, Lumumba's father, had raised about $100,000 in a five-month period going into his runoff against Jonathan Lee and hardly spent any of it. Despite that, Lumumba bested Harvey Johnson Jr., no slouch when it comes to fundraising, and, eventually, Lee, the election's top money-getter, handily.

2. Who'll have the most effective turnout operation?

Several of the candidates have broad, enthusiastic support. Will that enthusiasm translate into people taking a few extra minutes before or after work or school to cast a ballot for their woman or man? A key difference in this election, as we've reported, is that there do not appear to be any safe voting blocs. Every part of the city is up for grabs, meaning campaigns won't be able to rest on their laurels. They'll have to be out knocking on doors and working phone banks to make sure their supporters get to the polls before they close at 7 p.m.

3. How will generational splits play out?

Much ado has been made about the fact that three candidates—Chokwe A. Lumumba, Melvin Priester Jr. and Tony Yarber—are under age 40. Likewise, a lot of questions have been raised about the experience of veteran officeholders such as former Mayor Harvey Johnson Jr., state Sen. John Horhn and Councilwoman Margaret Barrett-Simon, and how much that experience resulted in concrete accomplishments for Jackson.

4. How much havoc will the lesser-known candidates wreak?

Aside from the Top 7—which includes former and present officeholders, candidates who had strong showings in previous elections and recent polls—there are five other people, some of whom have also run for city offices in the recent past, on the ticket.

The eccentric Gwendolyn Ward Osborn Chapman recently became a viral video sensation with a segment she taped for WAPT in which she advocated for the production of industrial hemp as a source of tax revenue, and is now in a position to draw some joke votes.

In a low-turnout, crowded race, any votes these folks get could be huge.

Whoever took it down has no respect for the late Mayor Lumumba. This is the kind of hateful politics I don't appreciate. In the end, we will all have to work together to make this city something to be proud of.

I'm sorry. Maybe I missed something. Or, is someone doing a little word play? No one has suggested, by the statements I have read, that a city council member "authorized" the mural be taken down. It's pretty clear where the call/order came from. I wish folks would simply answer direct questions with direct answers. Then again, I shouldn't expect that from politicians. We're not stupid.

My people can be so uninformed and with a tendency to rule on emotionalism rather than the letter of the law or policy set forth by governance. For starters, if these signs had been painted by gang members, we would call it graffiti and there would have been little if any attention paid to the removal.

My point is, it does not matter who/when/where/ or why the City's property was laced with unauthorized markings, remedy should be the same.

I read the "open letter" from Lumumba's daughter. My heart was saddened because in spite of the fact that she and Antar are lawyers, she could not speak to this situation in terms of legality. She spoke out of sadness and grief. There are four pneumonics of grieving : SAD, MAD, BAD and GLAD. We are "SAD" when we lose a love on; we are "MAD" because they died - We question and challenge even our "God". Then there is our coming to term with the fact that the love one's condition was "BAD". The fact that they were able to cease from pain and suffering allows us to experience "GLAD"ness. Everyone does not experience these behaviors and thoughts in the same pattern,i.e., your "MAD" might come before your "SAD".

The rule of law is and has always been subject to interpretation and discretion. Technically, if one drives 4mph above the speed limit, one is breaking the law and can be cited. Similarly, one can use the rule of law as a guise for ulterior motives. Using the previous example, if a law officer has a bias against certain folk, only those folk will be cited for said infraction (there are many studies and examples to back this). For someone to suggest that removal of the mural was simply a matter of law enforcement when actual gang graffiti has remained on city property for far, far longer that this tribute mural (yeah, I know this is anecdotal, but please believe that this is true) is rather obtuse. Frankly, I am saddened by the condescending, $.25 psychoanalysis and the ill-advised methodologies of the city operatives who carried out this political act, which created more controversy/ill-will than it resolved. Fortunately, we are not all simply automatons who are slaves to the letter of the law, and wiser heads would have handled this situation far better. May they return to the helm of our city government...

@kingkeylion "Frankly, I am saddened by the condescending, $.25 psychoanalysis and the ill-advised methodologies of the city operatives who carried out this political act, which created more controversy/ill-will than it resolved."

My grandma always said, "You can't worry about what people say: What you do worry about is - if the things they are saying are true." My comments did not come out of psychoanalysis, but, out of Grief and Loss 101. Because we are human, there are emotional responses to our losses. A great dis-service is being given to those who are hurting when you start blaming others for decisions which can be legally justified.

I had no dog in this fight; I am only an old senior citizen from the 60s with many battle scars to include jails, bombings, and murder. I know what the letter and the spirit of Mississippi law can deliver for some folks. I've witnessed it, so, save your energy on an attempt to educate me to what the "law" can give or take.

We are suppose to be better that this. Please! Stop talking down to my people! Stop pulling our young people into wars that they can't win or making promises that they can't keep. What they are left with are broken hearts and angry/hostile feeling toward people like me who are only trying to help.

There is an old saying that goes:

God gives us two ends to use;

One to sit on - One to think with.

It all depends on which you choose;

@justjess Right on, my brother. They should have just temporarily covered the mural until after the election, then if approved as an art display perhaps received permission from a Federal judge so that future races would not be affected.