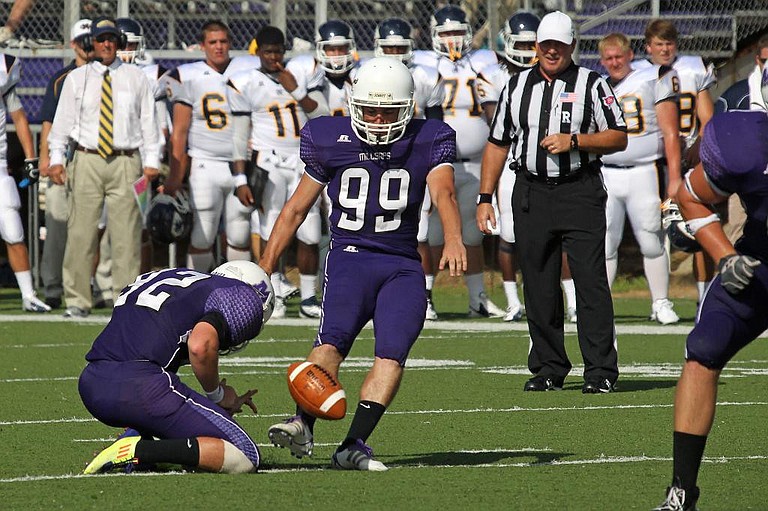 Millsaps College and Mississippi College have been meeting on the gridiron off and on since 1920, and the Majors and Choctaws have faced off annually since 2000, when they renewed their close rivalry.

This past weekend's meeting might be the final matchup between the two teams after 52 games. Mississippi College announced it was starting its first-year candidacy period to move from Division III to Division II (currently Delta State is the only D II program in the state).

If this 13th game was indeed the final "Backyard Brawl," Millsaps and quarterback Zak Thrasher put an exclamation point on the game. The Majors, before the series ended, took the Choctaws behind the woodshed for a 52-19 victory.

Thrasher rolled up 196 yards through the air and the ground. He had 171 yards passing while completing 11 of his 17 passing attempts and throwing for two touchdowns. The Majors quarterback added 25 rushing yards on four carries and a touchdown.

Mississippi College got the scoring started in the first quarter with Hunter Estess' 35-yard field goal. Millsaps answered back before the opening quarter ended with Thrasher finding Trevor King for a 23-yard scoring strike.

The Majors made the game a blowout when, 11 seconds before halftime, they scored a touchdown. Millsaps running back Taz Watson scored on a run from foru yards out, and Zander Romano capped the first-half scoring by adding a two-point conversion to make it 21-6 in favor of the Majors at halftime.

The Majors scored 17 unanswered points from late in the third quarter to late in the fourth quarter. Millsaps ballooned its lead when Thrasher found Zander Romano on an 11-yard touchdown pass, and the quarterback capped a drive with a one-yard touchdown run.

Millsaps put the game thoroughly out of the Choctaws' reach when Majors kicker Beau Brady added his third and final field goal of the game to increase the lead to 45-13. Mississippi College found the end zone one final time when Alex Archer found Stacey Dillard on a 36-yard touchdown pass.

But the Majors added insult to injury when Jonathan Moore returned the kickoff after Dillard's score for the final Millsaps touchdown of the night.

The Millsaps Majors had plenty of stars on the field other than quarterback Thrasher. Brady finished three-for-three on field-goal attempts and made all five of his points after tries. Barthelemy rushed for 102 yards on 28 carries, and the defense added four sacks and forced three Choctaw turnovers.

But even with Saturday's win, the Majors still trail the Choctaws in the series. Since the "Backyard Brawl" began in 2000, Mississippi College has a thin 7-6 edge over Millsaps College. Overall, the Choctaws have a 31-15-2 edge on the Majors as the series draws down.