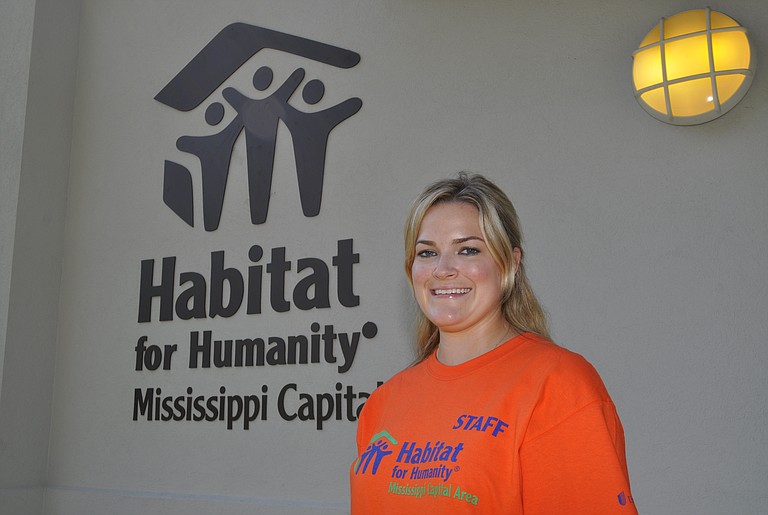 The Jackson native graduated from Jackson Preparatory School in 2007 and went to Mississippi State University, where she received a bachelor's degree in apparel textiles and merchandising with a minor in business and marketing, so she was new to this type of job.

After graduation and an internship in Dallas, she moved back to Jackson and started at Fondren's Interiors Market as a sales associate.

Gathings felt, however, that she was not fulfilling her passion. "I knew I always wanted to help people, but I wanted to do something more fulfilling," Gathings says.

When she saw the position available at Habitat for Humanity, she went for it. After she started the position last January, the organization quickly welcomed Gathings' warm spirit. Seeing the group's work change lives fuels her passion for bettering the Jackson community.

"It is incredible to see an area of nothing—not even a slab—be turned into a house for a family in need," she says.

Habitat for Humanity Mississippi Capital Area has, to date, built more than 560 homes in 27 years. Gathings' passion to help people has built her strong relationships with diverse groups of people. "I have been able to see parts of Jackson that I have not even seen, and I have lived here my entire life," she says.

Nationwide, Habitat's goal is to work with homeowners to create affordable housing. Locally, as volunteer development coordinator, Gathings connects organizations and volunteers to the Jackson metro area to help build homes for those in need. She also assists in building a stronger community. Those who receive housing must log 250 hours of "sweat equity" to their house or a neighbor's house. This creates stronger connections between people and their homes and community.

Gathings' hobbies are also community-centered, including meeting new people, spending time with friends and family, tennis and playing kickball on a local team.

Another outlet for Gathings is Habitat Young Professionals. This group for 21- 40-year-old professionals provides networking opportunities for future leaders around Habitat's mission of building affordable housing in partnership with low-income families.

"We are motivated to make a positive impact in the Jackson area and have fun doing it. We are love in action; a hand up, not a hand out," Gathings says.

Gathings looks forward to her future work with Habitat for Humanity. "Having the opportunity to be a part of something bigger than myself has changed my life," she says.

Read more about Habitat's young professional group in the Nov.-Dec. issue of BOOM Jackson magazine, out this week.