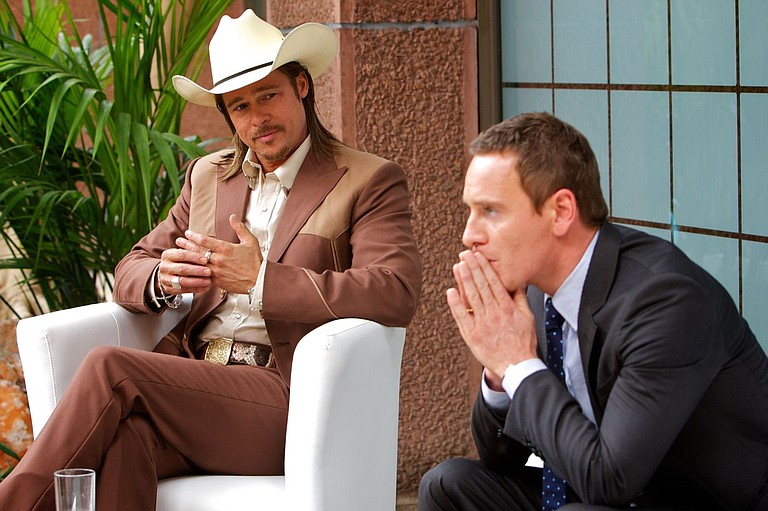 Brad Pitt and Michael Fassbender are among the beautiful faces in the disappointing “The Counselor.” Courtesy Scott Free Productions

"The Counselor" unites the visually opulent director Ridley Scott with Pulitzer Prize-winning writer Cormac McCarthy. The movie skims the surface of sex, greed and avarice before plummeting into an abyss of nonsense. It's a bewildering story, blood-soaked, piled high with miscreants, cluttered with vacuous symbols such as diamonds and cheetahs, and enveloped in a mist of pop-culture babble.

The movie opens with curtains fluttering in the breeze and two bodies moving under pristine white sheets. Scott tries to suggest purity, but it's nothing more than a smutty jolt of whispery pillow talk and suggestive foreplay.

As proof of his love, the Counselor stoops to crime to pay for a perfect diamond ring for his beloved Laura. The jeweler (Bruno Ganz) pontificates on cautionary diamonds and their relationship with the nobility of the fragility of life. The Counselor doesn't understand—nor do we, as the dialogue is riddled with religious and philosophical tautologies of McCarthy vintage. In "No Country for Old Men," which was based on McCarthy's book of the same name, the dialogue was fresh and cunning. Here, it comes off pretentious and silly.

Purchasing the diamond initiates the Counselor's downfall—he knows bad folks who will help him raise money. He rationalizes to his best client, Reiner (Javier Bardem), that just this once he will cross the legal line. Reiner eyes him up and down and smiles.

Reiner's a messy sort of convivial crook. He loves women, but doesn't understand them. It scares him that his current girlfriend Malkina (Cameron Diaz) has made love to his car. "So she goes around and climbs up on the hood of the Ferrari and pulls her dress up around her waist and spreads herself across the windshield in front of me with no panties on," he says. "You see a thing like that, it changes you." It changes us too, and not in a good way.

The Counselor partners with Reiner on a rather vague drug deal. Westray (Brad Pitt) brokers the deal for them with the faceless cartel. Things fall apart when Ruth (Rosie Perez), a convicted criminal in the federal penitentiary, convinces the Counselor to pay the speeding ticket for her son (Richard Cabral). The son loses his head. Twenty million dollars worth of drugs disappear. And everyone blames the Counselor.

The Counselor experiences great anguish in this film. I felt his pain. In fact, I lived it. This movie is repellent with a misanthropic integrity. Each of the chiselers—including the Counselor, who was never a good guy to begin with—has his or her agenda. Except for perhaps Laura, all of the characters are hard-boiled and pitiless.

Unlike "No Country for Old Men," the criminal subculture in this film doesn't come equipped with law enforcement as a moral explorer.

The actors look stunning, the locations are enticing and the film is glossy and glamorous. But even with Javier Bardem in orange blossom-tinted glasses and spiked hair, this film fails miserably because the one thing left out of its suffocating cocktail of debauchery, promiscuity and immorality is hope.

Without hope, there's no reason to care if the slick criminal entrepreneurs and the sleazy lawyer who represents them win. They all need to be flushed into the sewer. Eventually they are, in a metaphorical sense, but you don't leave overjoyed, only empty. Perhaps that is the point: Greed leaves you empty of feeling, principles, ethics and humanity.