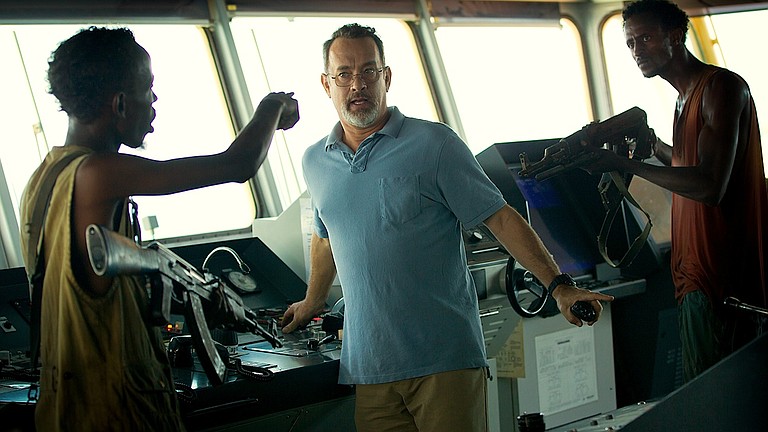 "Everything is going to be OK," the Navy doctor says to Capt. Richard Phillips (Tom Hanks). These are virtually the same words the leader of the armed and dangerous Somalian boy-pirates tells Phillips before they kidnap him from the Maersk Alabama, a cargo ship delivering food supplies and humanitarian aid to Kenya.

In Paul Greengrass' "Captain Phillips," based on Richard Phillips' autobiographical book, "A Captain's Duty: Somali Pirates, Navy SEALS, and Dangerous Days at Sea," if a hijacker says you'll be OK, your life will be turned inside out. Greengrass' signature shaky cam replicates the churning seas. It's a visceral experience and not for those with motion sickness.

The movie opens on the normality of Phillips' life before April 8, 2009. He and his wife, Andrea (Catherine Keener), and their two kids live in Vermont. He supports his family with a high-risk job ferrying goods from the Middle East to Africa.

Phillips pulls his gear together, including a family photo to sustain him for the long voyage ahead. Anticipate ominousness.

The action flips from Phillip's preparation to crowds in a Somalian village. Abduwali Abdukhadir Muse (Barkhad Abdi), aka "Skinny," picks a crew from volunteers wanting to make millions from stealing loot from ships. These scenes resonate, in part because the actors chatter in Somali, and we read English subtitles. Poverty is palpable on each face. Muse's skin pulls tightly over his skull, and his eyes are wild. He has something to prove. He's smart, motivated and dangerous. And Muse is only 16 years old.

As Muse and his pirate crew, armed with AK-47s, head toward the open seas, Phillips and his crew practice emergency drills on the 508-foot long ship. Somalian piracy is a known danger; however, the Maersk Alabama lacks guns. Their best defense is water hoses to drown interlopers.

Phillips is tense. The pulsating blips on the radar indicate an imminent threat approaching the virtually defenseless ship.

Greengrass, one of my least favorite directors because he seems unable to control the camera, shoots in spasmodic, short takes, with cuts from one anguished face to another. Is this filmmaking instinct and craft? The direction makes sense given the film's subject matter, but Greengrass employs this style in every film he's made, including "The Bourne Supremacy" and "United 93." We never see the big picture, because everything is shot in mini-bursts, much like the shots from an assault rifle. But, in "Captain Phillips," Billy Ray's script, the acting and the perfect replications of the ship and lifeboat smooth out some of Greengrass' frantic excesses.

After a false start, Muse and his thugs clamber up the side of Maersk Alabama. They scuffle with crew members, and then abandon the ship in a lifeboat with $30,000 in cash and Phillips as their hostage. Muse believes Phillips is worth millions.

SEAL Team Six runs the rescue operation, and the military precision is staggering and patriotic-fervor-inducing. I felt hawkish when SEAL Team Six demonstrated that we are better equipped and trained than any pirate on the seven seas. We will smite down enemy combatants with the mechanized destructiveness of modern warfare. Hooyah!

Tom Hanks' magnificent performance provides the film's heart. Phillips is in a classic Victorian test of leadership. He uses logic to outsmart his captors and words to soften each blow. Phillips is a realistic hero, not perfect, but willing to place himself in danger to save his crew. He has Hemingway-esque values and courage. These elements outweigh the pulp components of the film.

Contrary to what some have said, this movie does not pander to prejudices. It validates the flag on the ship.

As a ship's captain frequently trading in the Gulf of Aden Area, I can vouch for the authenticity of the marine and piracy scenes. In many respects they are terrifyingly lifelike. Of course, being filmed on a ship and not in a studio makes a massive difference to reality.

With the tragic events in Nairobi and East Africa over the last few weeks, the movie has become especially topical and relevant. For more intuitive background to this sad part of the world and the life of pirates and those sailing in the area, check out Amazon Books/Kobo/iTunes etc - 'The Megiddo Revenge'.