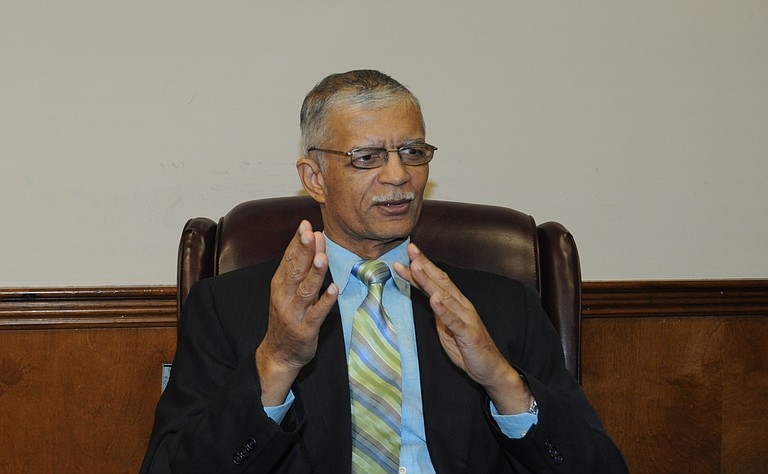 Jackson Mayor Chokwe Lumumba is against a state-mandated commission to oversee disbursement of funds from the proposed 1-percent sales tax. Trip Burns

When Mayor Chokwe Lumumba took a stand against the composition of a commission overseeing a 1-percent sales-tax increase during his mayoral campaign last spring, he won the votes of Jacksonians tired of the state treating Jackson like a bad seed.

Although he hasn't reversed that stance, Lumumba now says he's ready to throw his support behind putting the 1-percent sales tax to a vote, thanks to an agreement he reached with Greater Jackson Chamber Partnership regarding the chamber's nominations for the 10-person commission.

Lumumba said Monday the "deal" he had agreed to in principle with GJCP President Duane O'Neill was one that would allow him to nominate and appoint his own choices and not those of chamber.

That's where the confusion comes in.

The law states that the chamber will provide the mayor with eight nominees, of which he can chose four to serve on the commission. Lumumba has three members of his own to appoint, whom the city council must approve. Gov. Phil Bryant, Lt. Gov. Tate Reeves and Speaker of the House Phillip Gunn would each appoint one representative to round out the 10 members, although Gunn's representative wouldn't have a vote.

Lumumba said again Monday that the GJCP had agreed to allow him to choose his own people to serve as the chamber representatives, but on Oct. 1, O'Neill said the agreement, as he understood it, was that the GJCP would still be submitting its list of nominees to the mayor for his approval.

But the guidelines, as laid out in the law, is the same commission makeup that former Mayor Harvey Johnson Jr. rejected and Lumumba spoke against on the campaign trail in May and June.

"The state constitution and state laws give the power to determine the budget and how the money is spent to the city council," Lumumba told the JFP in May. "When you take that power to give it to another body, you're depriving the people that the population elects to do their task. I don't think that's done in most places in the state, and it shouldn't be done in Jackson."

Mississippi Senate Bill 2389 places requirements on each of the appointees. The committee members that the governor, lieutenant governor and house speaker appoint must all be Jackson residents. The "local chamber" (in Jackson's case, the GJCP) has the freedom, under the law, to nominate members who do not live in Jackson, but who have "business interests" in the city.

O'Neill said he has met with Lumumba "several times" to talk about the issue, and that Lumumba had spoken in broad terms about what he'd like to see in GJCP's appointees. "He talked about the whole city being represented," O'Neill said.

When pressed on whether he would accept the terms of the law and allow the GJCP to nominate its own list of possible appointees, Lumumba said he would not, adding that if that was the case, it would "change everything" for him on the issue.

When told of the mayor's Monday comments, O'Neill said he is still confident they can hash out the differences and move forward on the issue. "The mayor has been reasonable to work with," he said. "He understands we have to move forward, and I feel like, regardless of the different interpretations of the law, we are on the same page."

That remains to be seen, however. Lumumba has publicly called for the city to take up the 1-percent tax, which could produce an estimated $15 million in additional revenue for Jackson, potentially avoiding future water-and-sewer rate increases and situating the city on more solid financial ground.

After city council approval, Jackson citizens would vote on the new tax as soon as 21 days after the city publishes a notice. The tax requires 60 percent of voters to agree.

The devil is ALWAYS in the details!

It doesn't appear you will have to worry about the tax increase golden eagle. If things stand as they are, it will never make it to a vote. And rightly so. If the City doesn't control the majority of the positions on the commission, if it appeared on the ballot I would vote against it. That would be utter foolishness. By the way, the City of Pearl just passed a water rate increase of 30%. Isn't it interesting that there is no talk about it.

"By the way, the City of Pearl just passed a water rate increase of 30%. Isn't it interesting that there is no talk about it."

Maybe nothing is being said because it is a heck of a lot difference in a City going up 30% than a City (Jackson) going up 108%.