Dinner and a Murder 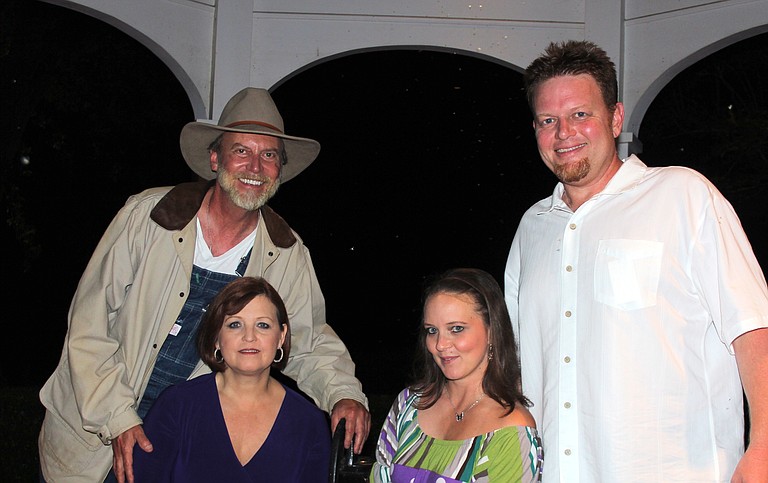 Cheryl Abernathy, Keni Bounds, Wayne Thomas and Eric Riggs want to get the audience involved when they perform as the Detective Mystery Dinner Theatre group.

If your evening meals are starting to get boring, you might want to consider keeping company with The Detectives Mystery Dinner Theatre group, a troupe of local actors who perform all over the southeastern region.

Their subject matter is mystery in its lightest form, but their main performance objective is comedic—they're looking for a room full of laughs by the end of the night. The group's interactive style places players among the audience and includes dinner guests in the show.

"Every table is a team," says Keni Bounds, who founded the Detectives troupe with Eric Riggs. "It forces audience members to interact not only with us, but with other people at their table."

Bounds works for MassMutual in Ridgeland by day, but dinner theater has become her passionate distraction when she is not tending to work or family. She and Eric Riggs write all the scripts for Detectives; they are up to 22 scripts that the group performs year round for both public functions and private parties.

"Our writing usually starts with just one of us having a premise for something, like a wake or wedding," Bounds says. "Then it just spills out in our brainstorming sessions where we try to write everything that comes out."

Wayne Thomas, one of the recurring players in the troupe, mentions that he often sees real-life influences in the scripts and the improvised lines that happen during a show.

"One thing that I found after having worked with Keni and Eric for a while is that I'll see lines and things that characters say that actually happened in real life, usually something that happened to one of us," says Thomas, a financial adviser when not doing dinner theater.

The audience is written into the script, so to speak—attendees become part of the story and the comedy to help the performers not only solve the "mystery" (one that Bounds says is comically easy to deduce) but also become actors when needed. It's an intimate, and often risky, way of performing that Bounds and Thomas enjoy for its spontaneity.

"It's normally the audience surprising us," Bounds says. "We'll say something, and they'll comment. And you have to address them. On stage, you're taught to ignore the audience, but with what we do, you can't ignore them. People really get into it as the show moves along."

One of the challenges of this style of theater involves staying in character when the unexpected takes place (and without the refuge of a green room). Thomas and Bounds take up this challenge and use it to their advantage.

The Detectives have recently presented "When Cletus met Elizabeth," a "Guess Who's Coming to Dinner"-style storyline that pairs a "redneck" family with high society. The group is also working on a special Christmas performance called "Santa Claus is Watching You," a humorous follow up to last year's holiday show that included the murder of Mrs. Claus This year Santa, played by Thomas, will bring a new Mrs. Claus into the picture—a polarizing "gold-digging" type who will no doubt get the audience's attention.

Most of the Detectives Mystery Dinner Theatre performances in December will be private functions, but you can catch "Santa Claus is Watching You" at their New Year's Eve show at Kismet's (315 Crossgates Blvd., Brandon, 601-825-8380), which will be open to the public for $39 a ticket. If you have any questions or want to check up on showtimes, go to thedetectives.biz.