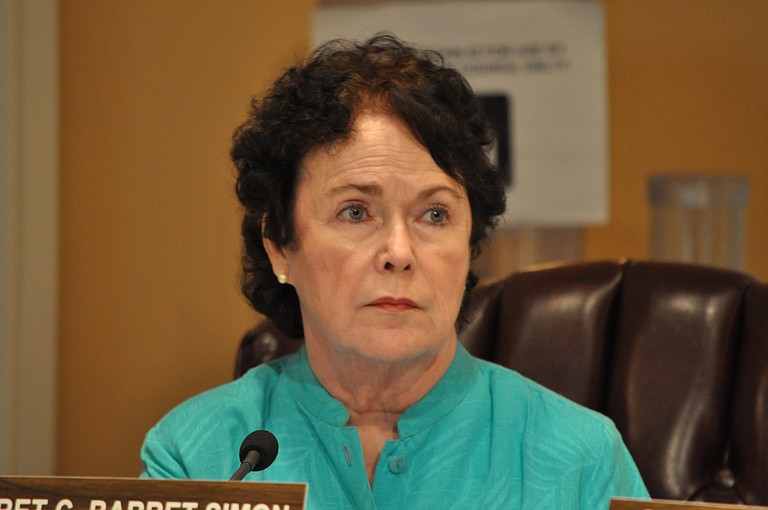 Ward 7 Councilwoman Margaret Barrett-Simon said at the meeting that the city has too much at stake to not help the Jackson Zoo maintain its accreditation. Trip Burns

After two and a half years of Beth Poff's serving as the executive director of the Jackson Zoological Society Inc., one would think that longtime city officials would know how to pronounce her surname.

At yesterday's special meeting of the Jackson City Council, where Poff asked for a $1.2 million advance on the zoo's annual appropriation, council President Charles Tillman and Mayor Chokwe Lumumba called Poff, which is pronounced phonetically, "paw," "poof" and "puff."

The moniker miscommunication is emblematic of criticisms that Poff and her staff have been out of touch with city leaders as well as residents of the West Jackson neighborhoods that surround the zoo. At yesterday's sparsely attended Jackson City Council special meeting, Poff promised to do a better job of keeping city council members in the loop.

"I would love to come before this board with some good news every once in a while instead of with concerns," Poff said.

Lately, those concerns have mostly been about the zoo's dire financial situation, which threatened the park's national accreditation. The Association of Zoos and Aquariums denied the zoo's request for reaccreditation in early September on the grounds that the zoo was not financially stable.

The city council gave the zoo an emergency cash injection so that the park could temporarily keep its accreditation through an appeals process, which will culminate March 27 with Poff making a presentation at the AZA regional meeting in Memphis.

Poff said that if the council forwards the zoo the rest of its fiscal-year 2014 budget appropriation ahead of an annual November audit, it would put her in a stronger position to argue that the zoo should remain accredited.

The full council will vote on the request at next week's regular meeting on Tuesday, Nov. 19, at 6 p.m. Rick Hill, director of the city's department of administration, said that moving the money around would not "materially impact (the city's) cash-flow position."

Ward 7 Councilwoman Margaret Barrett-Simon said at the meeting that the city has too much at stake to not help the zoo maintain its accreditation.

"I just don't think this would be a time to turn away from the investment that we've made there. I look at it as protecting our investment," she said.

I support maintaining the accreditation. I'm just concern on it's longevity. Will the revamp efforts be enough to to bring life back to the Zoo? Is it at the best, profitability sound location for future growth; acres, feature traffic and human traffic? 2014 should be the year of soul searching for the Zoo or this will be back in the news.

"The moniker miscommunication is emblematic of criticisms that Poff and her staff have been out of touch with city leaders as well as residents of the West Jackson neighborhoods that surround the zoo."

I know nothing of Ms Poff, but what does the mispronunciation of her name have anything to do with the residents in West Jackson?