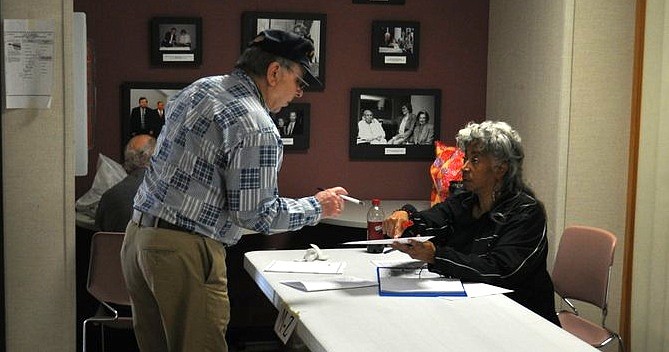 Last Tuesday, 35 percent of Jackson voters said Jonathan Lee was their top choice for mayor of Jackson. Another 24 percent named Chokwe Lumumba as their choice. Problem is, only 30.7 percent of all registered voters in Jackson even showed up. Trip Burns

Last Tuesday, 35 percent of Jackson voters said Jonathan Lee was their top choice for mayor of Jackson. Another 24 percent named Chokwe Lumumba as their choice.

Ten of the 89 polling locations received less than 20 percent of its possible votes. The worst offenders were Precinct 49 at the Jackson State University Student Union, where 49 out of a possible 2,282 voters (1.8 percent) chose to voice their opinion, and Precinct 89 at the Metrocenter Sears, where 131 of 980 (13.4 percent) voters turned out.

"It's disappointing," said Corinthian Sanders, a JSU student who ran for the Ward 5 City Council seat. "It was close to the same turnout in the general elections last year. People are just not educated on the importance of voting. (Jackson State University) needs to do away with the rules about on-campus campaigning. There is a law that states the university cannot endorse one candidate over another, but it doesn't say anything about letting the politicians come on campus and engage the students."

If trends continue, low voter turnout could have a big impact in the May 21 runoff between Lee and Lumumba.

Lumumba, the current City Councilman for Ward 2, garnered more support than Lee in 56 of Jackson's 89 precincts, while Lee trumped Lumumba in just 34 precincts, with one tie. But Lee won overwhelming support from white voters, winning by 706 votes and 622 votes in Precincts 34 and 35, respectively, in Ward 1. In the four highest-percentage voting precincts, Lee drubbed Lumumba 2,087 votes to 20.

Of the 56 precincts that favored Lumumba over Lee, just 22 had more than 30-percent voter turnout.

Based on Census tract data used to draw voting-precinct lines, Precinct 34 in Ward 1 has the highest proportion of white voters in the city, at 99 percent. In that precinct, Lee carried just over 90 percent of the vote. Lee's next closest competitor in the precinct was incumbent Mayor Harvey Johnson Jr., who garnered 6.3 percent of the vote.

That trend continues through the 11 precincts with the largest percentages of white voters, all of which are located in northeast Jackson. In these precincts, which average 1 percent to 15 percent African American voters, Lee captured an average of 79.6 percent of votes, compared to 11.2 percent for Johnson and 3.4 percent for Lumumba.

Lee did poorly as the percentage of black voters increased, however. In the top 11 solidly black voting precincts, which range from 100 percent to 96 percent African American, voters chose Johnson or Lumumba over Lee.

In Ward 3 precincts 23 and 31, both of which are 100 percent black, Census data show, Lumumba bested Lee and Johnson, receiving 30 percent and 37 percent of votes, respectively.

On average, Lumumba received 31.3 percent of the 11 precincts with the highest proportion of voters. In these same precincts, Johnson received an average of 25.1 percent and Lee, 22.3 percent.

The election analysis is actually no surprise. Lee is backed by white voters and money. Historically whites in this city have benefitted economically from mayors who ave been willing to maintain the status quo. Blacks have been disappointed over and over again from these mayors willingness to sell them out in order to keep "white Jacksonians " HAPPY and to maintain their place of "the acceptable" Black. MrLumumba has NEVER been nor EVER will work to enrich himself off of the disadvantages of people of color specifically and will continue to work for the human rights for ALL. If divisiveness means wanting the majority of the people who live, work and die, in this city to reap equal benefits, I KNOW you won't get an apology from Mr Lumumba nor should you. He is committed to equality of opportunity and human rights. We will continue to b. independent and fight or every vote. This is a PEOPLE's MOVEMENT, not a corporate takeover one. This city stands at the crossroads of a FEW benefitting /status quo OR voting for a candidate that believes in the citizens of Jackson being GREAT

Sarah, a lot of african americans support Lee, too. The younger creative class of of people in Jackson will surely carry Lee to a victory; we're tired of the older generation being divisive, and that's for both races.

I do agree that this is a PEOPLE's MOVEMENT, because I'm sure a large number of PEOPLE will be MOVING if Lumumba is elected.

Lee does indeed carry some baggage, but so does Lumumba. I just can't possible see Lumumba doing anything but dividing a city already divided.

The Majority of Lee's support is concentrated in ONE part of the City. The people you speak of live in that ONE part. Yes, he has some AA support but not the majority of those who will be voting. After Quinn's endorsement today (and do you really believe that the Mayor will endorse Lee), Lee can only hope that only the people in Northeast Jackson vote on next Tuesday. As far as the large number of people moving, isn't that same old tired argument people like you use. Please move and do those of us who stay a huge favor.

I really don't see Harvey endorseing anyone - because he's chomping at the bit to call the failures of the new administration - so he can work on his third comeback.

It really is going to be interesting to see how the narartive is driven given who wins the election?

The old paradigm of stodgy white men vs Black people is over and has been over. The paradigm now is Black middle class people like robbier who say all the same things that the old white men would say but under the cover of being Black.

Lumumba isn't the second coming of Jesus. He's a nationalist who appears to be being swallowed by the establishment. His opponent works directly for the ruling class under the guise of being the new generation. This ish is so boring and pathetic.