Savior in a Red Cape 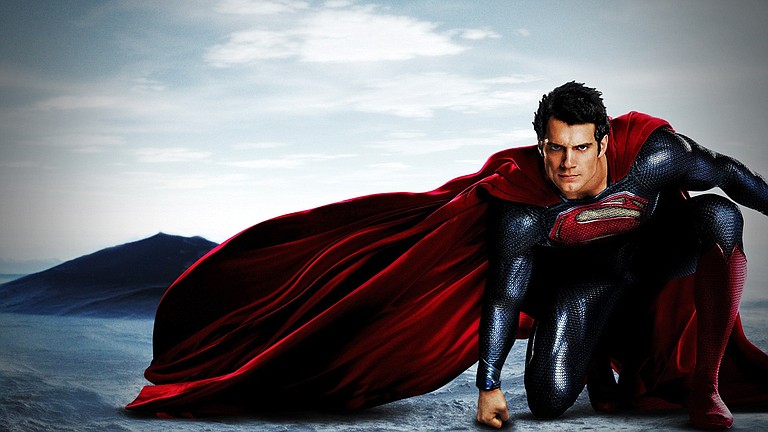 "Man of Steel" aspires to wring out the flaws in our previous conceptions of Superman. The contrast between Vintage Superman and Reinvented Superman is startling--and for true believers, perhaps a touch too serious and sacrilegious.

Vintage Superman, from the Christopher Reeves era, flies around in red hot pants, tights and a cape, and poses with his hands on his hips to demonstrate his fine physique to admiring kids in Mayberry-like towns. People speak in golly-gee, awe-shucks prose about Vintage Superman: "Is that a bird? ... A plane? ... No! It's Superman!" Vintage Superman smiles brightly.

Reinvented Superman is not a man at all. He's 100 percent extraterrestrial alien, fresh off the flying saucer. But instead of a lizard neck, child-wonder eyes and an oversized-index finger, this alien life form is a god-like Adonis from the dying planet of Krypton. He lands in Kansas farm country as a wee baby without a stitch of clothing. A farmer and his wife, Jonathan and Martha Kent (Kevin Costner and Diane Lane), find the lad in a field. They pry open his rocket ship and cradle a bundle of joy. And, as all parents do, they know that their baby is special. They entrust him with a fine human name: Clark Kent, which is a radical departure from his birth name, Kal-El.

The kids all sense that Clark is different, and young Clark knows that he is, too. When he looks at his classmates and teachers, his X-ray vision reveals bones and veins and pulsating organs. He hears clusters of sounds that frazzle his brain. Clark's super-duper senses nearly destroy him, but he learns to focus on one thing at a time.

For 33 years Clark (Henry Cavill) tries to blend in with humans. He grows scraggly facial fuzz. He wears jeans and lumberjack shirts. He works on boats catching fish. But when he meets Pulitzer Prize-winning reporter Lois Lane (Amy Adams), she smells a story. She starts to investigate this strange man who helps people in small ways.

The Krypton homeboys overshadow the Lois Lane thread in the movie. Led by General Zod (Michael Shannon), the Kryptonites invade Earth to find the codex that Jor-El (Russell Crowe) planted on baby Kal-El. When it's clear that the aliens want to rape and pillage the Earth, Clark reveals his true identity, stripping off the drab human costume. The incredibly handsome Cavill fits the spandex suit perfectly.

Directed by Zack Synder from a script written by David Goyer with production overseen by Christopher Nolan, "Man of Steel" exhibits fine craftsmanship, excellent acting and everything else you expect from a $225-million blockbuster. There's the obligatory alien tunnel from space straight into the core of a major metropolitan city. Stuff gets blown up. Metal crashes into metal. Tall buildings collapse. Superman zips around like a super drone protecting the hive.

The best explanation of the Superman mythology was summed up by the insightful Bill in "Kill Bill Vol. 2":

A staple of the superhero mythology is that the superhero is an alter ego: Batman is actually Bruce Wayne. When Spider-Man wakes up in the morning, he's Peter Parker. He has to put on a costume to become Spider-Man. In his lack of "human-ness," Superman stands alone.

Superman didn't become Superman. Superman was born Superman. When Superman wakes up in the morning, he's Superman. His alter ego is Clark Kent. What Kent wears--the glasses, the business suit--that's the costume. The Clark Kent persona is how Superman views us: He is weak; he's unsure of himself; he's a coward. Clark Kent is Superman's critique on the human race.

In this film, though, Reinvented Superman never criticizes the human race; he blindly accepts their flaws. He's a savior, and he's a solid one--until the neck twist.

As one of the lady cops says in this film, "Superman's hot." The man of steel burns the screen. So maybe that's enough for a summer flick.

Ed. Note: In the print version of this story, editors inadvertently deleted the paragraph that included Anita's attribution of the quote from 'Kill Bill Vol. 2.' We regret the error and apologize to the author and filmmakers.