Five Ways Congress is Trying to Curb Rape in the Military 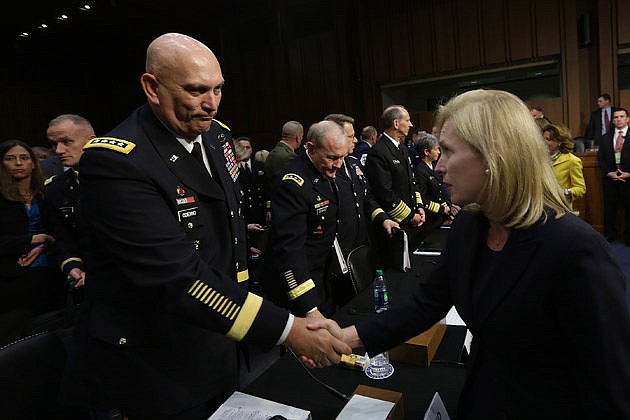 This story appeared on ProPublica.

When the Senate Armed Services Committee held a hearing on the U.S. military's sexual assault crisis, lawmakers grilled Army, Navy, Air Force and Marine officials on the alarmingly high number of rapes and other sexual abuses in their ranks.

Political momentum to address the problem has been building since the Pentagon released statistics last month showing that sexual assault increased by 35 percent between 2010 and 2012. The outcry grew louder when a string of scandals came to light, including alleged sexual assaults by Army and Air Force officials who were in charge of preventing sexual abuse.

Senators have rushed to draft legislation to hold attackers accountable and provide support for victims. But at the Senate hearing, officials steadfastly opposed most major changes in the way sexual assault cases are prosecuted. "It will undermine the readiness of the force ... [and] will hamper the timely delivery of justice," said Army Chief of Staff Ray Odierno.

Here's a rundown of key congressional proposals and what the military is saying about them.

Under the military's criminal procedures, commanders have clemency powers, which means they can dismiss military court convictions "for any reason or no reason." The policy came under fire this spring when Air Force Lt. Gen. Craig Franklin overturned a jury's ruling that Lt. Col. James Wilkerson, a fighter pilot, was guilty of aggravated sexual assault. Another official, Air Force Lt. Gen. Susan Helms, was blocked from a promotion in May for throwing out a captain's sexual assault conviction without any public explanation.

In April, Defense Secretary Chuck Hagel voiced support for stripping commanders of this power. Under Hagel's proposal, commanders could still reduce someone's sentence but would have to submit a reason in writing. Sens. Claire McCaskill, D-Mo., and Barbara Boxer, D-Calif., have called for similar changes. Rep. Jackie Speier, D-Calif., introduced a House bill that goes further, removing a commander's authority to overturn or reduce a judge's sentence.

Military officials are open to reforming the policy, though they say the Wilkerson case inflated outrage over a rarely-used power. Sen. Lindsey Graham, R-S.C., a member of the Armed Services Committee and former Air Force lawyer, has been the only lawmaker to speak out against the proposed change in policy.

2. Have lawyers determine which assault cases are credible 2014 not the defendant's boss

Sen. Kirsten Gillibrand, D-N.Y., has called for the most major shift in how the military tries sexual assault cases. Now, commanders decide which cases are investigated and prosecuted, and which are thrown out. Gillibrand's bill proposes giving independent military prosecutors that power for sex crimes and other serious charges. Commanders have an incentive to ignore rape allegations, advocates of the change say, because it reflects poorly on their leadership.

Military officials are strongly opposed to such a change in authority. "The consequences of such a decision would be ... extraordinarily damaging to the nation's security," Army Gen. Martin Dempsey wrote in a letter to the Armed Services Committee chairman, Sen. Carl Levin, D-Mich. The change would "undermine good order and discipline" by sending a message that commanders "cannot be trusted," Dempsey said.

3. Make sure a sex crime conviction means losing your job

Sen. McCaskill has led a bipartisan effort to require that anyone convicted of "rape, sexual assault, forcible sodomy, or an attempt to commit any of those offenses" be dismissed or given a dishonorable discharge.

Lt. Gen.Richard C. Harding of the Air Force argued during the hearing that a defendant's character should be relevant in determining the case but should not have "overriding weight."

In the past month, there have been not one but two instances of soldiers working in Sexual Assault Prevention and Response offices charged with sexual assault. The chief of the Air Force's prevention office was arrested last month for groping a woman. A week later, an Army sergeant working as a sexual assault program coordinator was arrested on multiple accusations of sexual abuse and for running a prostitution ring.

Hagel immediately demanded that all officers in the services' Sexual Assault Prevention and Response branches be retrained, rescreened, and recredentialed. Since then, Sens. Jeanne Shaheen, D-N.H., and Deb Fischer, R-Neb., have introduced a bill that would elevate those jobs to a higher status, requiring stricter screening and more certification. In a letter to Secretary Hagel, Shaheen and McCaskill wrote that "In many cases, no interviews are required, and the commander plays a hands-off role in choosing who will perform those duties." The bill would require a commander to pick someone for the post.

While the Senate was hearing testimonies by military officials, the House unanimously passed legislation to increase access to disability benefits for sexual assault victims in the military. Veterans battling military sexual trauma face a higher burden of proof than those with post-traumatic stress disorder, or PTSD. And because most sexual assaults go unreported, there is often little evidence available. Under the proposed law, veterans would only have to show they were diagnosed with a mental health condition that stems from military sexual assault.

Read our Muckreads roundup of the most important reporting on sexual assault in the military.