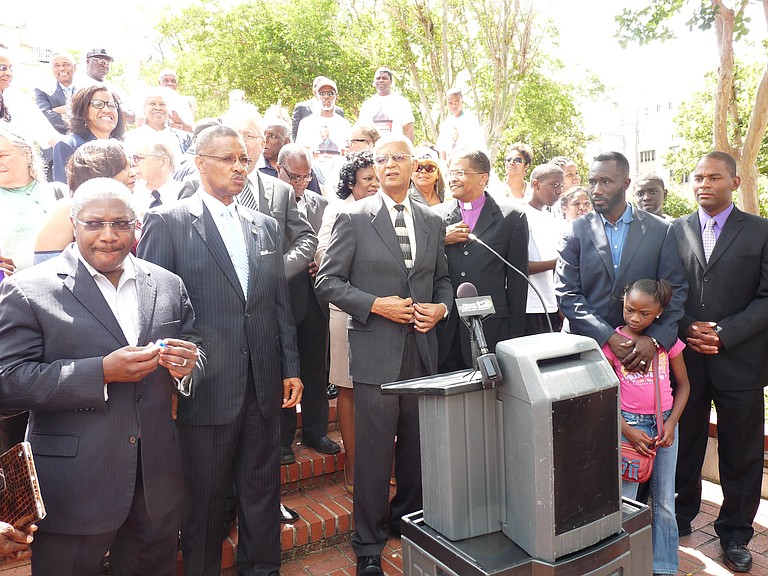 Lumumba urges every Jacksonian to get out and vote. Photo by Tyler Cleveland.

Chokwe Lumumba brushed off the notion that a rumored write-in campaign for fellow Jackson Councilman Quentin Whitwell would derail his plans to become the city's next mayor in Tuesday's general election, but he still wants every man and woman in Jackson to vote.

The Democratic nominee held a press conference May 29. Flanked by practically every elected Democrat in the city, Lumumba asked Jackson voters to support him once more. "I want every citizen in Jackson to vote," Lumumba said. "If your dog is registered to vote, bring him, too."

Yarber, who hadn't hit the campaign stump for any candidate before last Wednesday, challenged the media cameras to take a look at the crowd assembled near the fountain on the front steps of City Hall.

Lumumba has been on a unity tour since his win in the Democratic run-off May 21, when he beat challenger Jonathan Lee by more than 3,000 votes that were largely predicated along racial lines.

Quinn was the last to take the podium before Lumumba, and said she believes Lumumba will be a mayor for all of Jackson, which prompted one campaign worker to respond, "One city! One destiny!"

All of Jackson may not be ready for that just yet, though.

Chain emails circulated last week promoting a "secret" write-in campaign for Ward 1 Councilman Whitwell, who denied knowledge of the campaign and said he has no desire to be mayor--at least not right now.

The threat of a voter surge against him didn't keep Lumumba from pushing for the citizens of Jackson to get out and vote in the General Election where he faces three independent candidates--Francis Smith, Cornelius Griggs and Richard "Chip" Williams--on June 4. The Republicans did not field a candidate in the race.

Following Mayor Harvey Johnson Jr.'s final State of the City address the same day, Lumumba said he has been pondering how he'll fill some crucial municipal positions such as police chief.

"I've been thinking about all of those positions a lot," Lumumba said. "But I haven't officially interviewed anyone. I'm not going to start doing anything mayoral until I am officially elected mayor."

The inauguration of Jackson's next mayor is set for July 1.

"If your dog is registered to vote, bring him, too."

I wouldn't be surprised if ole Spot was registered multiple times!

js1976 i'm sorry that you don't have a clue. You seem to be missing quite a bit in your life and you've found a forum to air your ignorance. The JFP obliges you but you really should get out more. There's a lot that has happened since 1976!

Why knowledge, I'm not searching for a clue! However, if I find one I'll save it for you.

On Tuesday, I took the hardest vote that I as a voter ever did in the City of Jackson. I'm white and a Democrat, and my preferred candidate was Mr. Lee. However, that did not happened. I took Mr. Lumumba's experience as a lawyer and as a city councilman into account and balanced it off against his early radical and somewhat racist history, but thought that with age perhaps came wisdom and thoughtfulness. I realize that as a lawyer sometimes you have to be aggressive in the courtroom for your client. In conclusion, I am relying on Mr. Lumumba's promises of fair treatment for all races, genders, and political parties in his Administration and gave him my vote.

What specific "RACIST" comments did you hear from Mr. Lumumba? Did you vote for Governor Barbor?