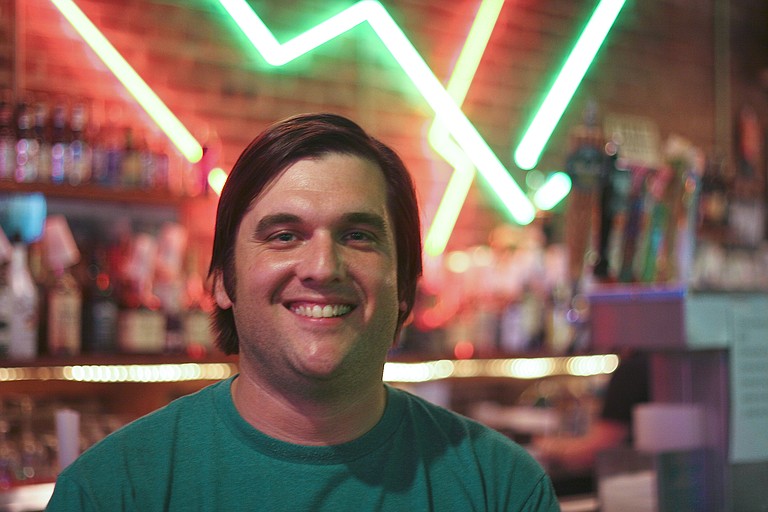 Open those wallets, ladies. Each year at Chick Ball, we raffle off our local Men of Character to raise funds for the Center for Violence Prevention. This year, the money is going to fight sex trafficking (see pages 14-31 for the full lowdown on this year's 9th Annual Chick Ball).

Luis Bruno is a professional chef and proud owner of "Bruno's Adobo." Originally from Bronx, NY, Bruno earned a degree in culinary arts while living in Florida in 1993 and has been involved in the restaurant business since he was a teenager. Jackson diners know him for his eclectic dishes, his passion for healthy eating and his involvement in the fight against diabetes and obesity in Mississippi.

Bruno's first job in the food industry came at age 13 when he worked at his brother's pizzeria in upstate New York. After he earned his degree in culinary arts, he moved to Jackson, where he was employed as the executive chef at the Mississippi governor's mansion. In 2001, he left and established his first restaurant, "Bruno's Eclectic Cuisine." He garnered critical acclaim from The New York Times, Southern Living and The Birmingham News, and earned the award for Best Chef from the Jackson Free Press.

In the midst of his success, Bruno's health took a turn for the worst. Weighing more than 400 pounds at the time, he suffered from diabetes, sleep apnea and advancing liver disease. As his symptoms worsened, his doctor said he had five years to live if he did not change his lifestyle. As a result, Bruno closed his restaurant in 2003.

Bruno made a triumphant turnaround. He began by starting an 800-calorie liquid diet regimen. In five and a half months, he lost about 160 pounds. Eventually, Bruno developed a lifestyle of healthy eating habits, proper food portioning, and exercising on a consistent basis.

In 2009, Bruno started running Bruno's Adobo. His life today is focused on helping Mississippi adults and children maintain good eating habits and a healthy lifestyle. He's combating obesity and diabetes in the state, one person at a time.

For Christopher Mims, being among the "Men of Character" in the ninth annual JFP Chick Ball has been a great honor and a surprising eye opener.

"I've seen the other men who are in this league, and I'm in great company," Mims said.

The Greenwood, Miss., native moved to Jackson in 1993 to attend Millsaps College, attaining his bachelor's of arts in English in 1999.

"I felt like this was the place that I wanted to be, and I've been here ever since," Mims said.

Mims has been involved in several organizations in the city, such as Jackson 2000, where he served as a board chairman in 2007.

Mims is interested in community development and has worked in communications for some time, once serving as the Jackson Zoo's director of marketing. Recently, Mims served as the chief spokesperson for the City of Jackson under the administration of former mayor Harvey Johnson Jr. Mims now works as a freelance strategic communications consultant.

"I've had the opportunity to speak on behalf of the city and to deal with many different issues that are of concern to the citizens of Jackson," Mims said.

While Mims has spent most of his time informing the community, being a part of Chick Ball has also taught Mims a thing or two.

With sex trafficking being the focus of Chick Ball this year, Mims discovered some disturbing statistics during his research, including that sex trafficking is the third-largest criminal enterprise in the world.

"To realize that it's occurring in Mississippi at our own back door, it's something that we need to be aware of," Mims said. "Anything that I can do to lend a voice to this issue and to let people know that this is a serious concern for our community, I'm happy to do."

After Hal White died earlier this year, it only made sense that another member of the family would take over kitchen duty at Hal & Mal's.

Lee, a lawyer by trade, started cooking with his father-in-law eight years ago.

White—known as "soupmeister"—was famous for his food, which combined family recipes with techniques learned from restaurants on the Gulf Coast and in Jackson. For his family, as in many southern families, cooking was a family-affair, and it is how White and Lee bonded.

A Vicksburg native, Lee moved to Jackson to study law at Mississippi College, and was a partner at the law firm of Eichelberger and Lee. After the death of Hal & Mal's co-owner, Lee began helping out in the kitchen and eventually transitioned from full-time lawyer to full-time general manager.

Lee and his wife, Brandi, hope to bring back some of the old staples, such as shrimp creole, quiches and hand-rolled meatballs. He wants to keep White's tradition of cooking fresh, homemade food alive.

When he isn't at Hal & Mal's, Lee enjoys spending time with Brandi and their daughter, Rivers Taylor.