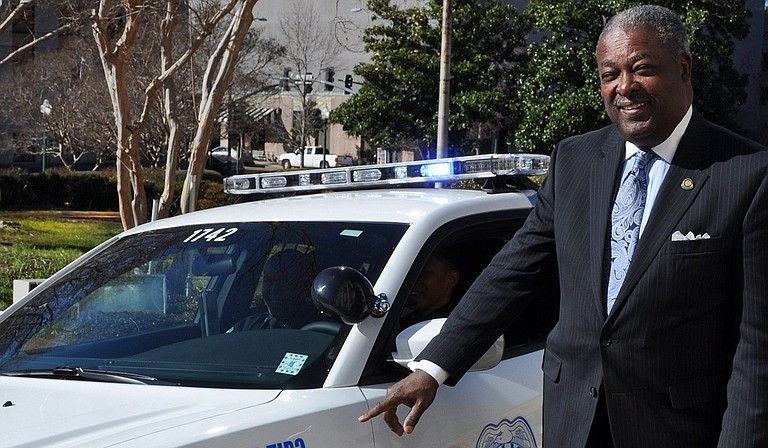 Jackson is using rewards to encourage citizens to report tips on crime, specifically focusing on convicted felons in possession of firearms.

Mayor Harvey Johnson Jr. told the media Wednesday that 24 percent of apprehended suspects in homicides in the city last year were felons who possessed guns illegally. (That is in contrast to a WAPT report that stated "nearly 30 percent of all crimes committed last year in Jackson were linked to a felon with a handgun.")

Central Mississippi Crime Stoppers is offering rewards up to $500 for tips on felons with guns, and up to $1,000 for tips that lead to the arrest of violent criminals.

"It can help us prevent violence, prevent crime, even prevent homicides in our capital city," Johnson said.

The Jackson Police Department unveiled six police cruisers newly painted with Crime Stoppers logos and phone numbers, as well as decals that read "Felons with firearms is a crime!!!"

MIchael Guest, the district attorney for Madison and Rankin counties, is the chairman of the Central Mississippi Crime Stoppers. He said Crime Stoppers has helped stop violence and "soft" crime for many years.

"What we hope to accomplish with this new program is not only to increase the visibility of Crime Stoppers so that more tips will come in to the Jackson Police Department, but we hope this acts as a deterrent—that because of this program, we're able to take stolen firearms off the streets of Jackson, (and) that we're able to keep firearms out of the hands of convicted felons," Guest said.

The Jackson City Council voted Tuesday to allow the mayor to execute grant contracts for federal grants available in 2013.

The Community Development Block Grant program will also provide money to local charities, including about $900,000 that will go to the state Department of Health for the Housing Opportunities for People with AIDS program.

"I hope this gives an indication that when we talk about cuts in Washington, (D.C.) or we talk about sequestering funds, it has a definite impact here in the city of Jackson," Johnson said.

"I hope this gives an indication that when we talk about cuts in Washington, (D.C) or we talk about sequestering funds, it has a definite impact here in the city of Jackson, Johnson said."

If Congress does allow this self-made crisis to happen, MS will be severely impacted. With all of the great plans announced by Mayor Johnson to include city grant awards to non-profits, these offers will become a beautiful thing that turns UGLY!