Rockin’ Around The Christmas Tree 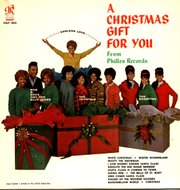 Phil Spector’s 1963 holiday CD is the one all other seasonal releases aspire to be.

One of the most unique things about holiday music is that it is usually only good for about a month. No one goes caroling in July, and no one wants to hear "Jingle Bells" on Valentine's Day.

As long as rock 'n' roll has been around, its practitioners have been trying to add their spin to season's greetings. Chuck Berry told Rudolph to run, and Brenda Lee went rockin' around the tree.

I love Christmas music. I also love rock music. Melding these two loves can sometimes be a tedious task. As a result, I have amassed quite the collection of yuletide recordings. Here are a few that are quintessential for any fan of popular music.

Elvis' Christmas music is among the best. His first holiday record came out in 1956, and Elvis recorded spiritual music throughout his career. Tons of his Christmas compilations exist, but this one is all you'll ever need; it has all of his holiday recordings.

• "A Christmas Gift For You" from Phil Spector

This is the Christmas rock collection others aspire to be. Just about everything before it was pretty schlocky, and everything after it imitated it. Phil Spector, the producer who invented the "Wall of Sound," gives listeners the big arrangements that made him famous with artists such as The Ronettes. This collection still holds up after all this time. Besides, you can't beat Darlene Love's "Christmas (Baby Please Come Home)."

The first side of this classic features that signature Brian Wilson surf sound with perennial favorite "Little Saint Nick." The second side has lush arrangements like "White Christmas," complete with that beautiful Beach Boys harmony.

When this came out in 1987, it raised the bar for pop Christmas collections. While several follow-ups have emerged, nothing can beat the original with Run D.M.C.'s "Christmas In Hollis" and The Pointer Sisters' "Santa Claus Is Comin' To Town." Also, this set has one of my favorite versions of "Silent Night," sung by Stevie Nicks.

The instrumental surf band set Christmas music on fire with its version of "Sleigh Ride." The recording is a romp through '60s pop as the band mixes standard carols with a big beat and quotes from popular artists.

For those who like to delve a little deeper, here are a few of the oddballs—recordings that are either better than they should be, or just too weird to classify.

This will go down as possibly the oddest musical pairing of all time. The Thin White Duke meets Der Bingle, and the results are surprising.

• Bob Dylan's "Christmas in the Heart."

The album plays out like old-school recording. It's classic in every way, but Dylan's older, more grizzled voice adds an air of strangeness to the proceedings. Of course, Dylan sings it all fairly straight, only adding to the confusion.

With a title like that, you know it's got to have those dogs barking/singing "Jingle Bells" along with "Grandma Got Run Over By A Reindeer" by Elmo and Patsy. You'll hear more than a few chuckles when playing this in the car.