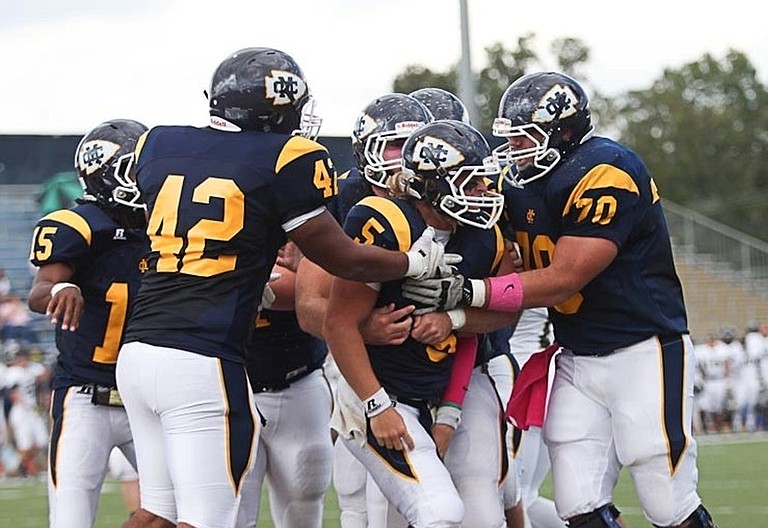 As college football reaches its conclusion for the year, awards and honors are starting to pile up for both Mississippi College and Millsaps College football players. Two Choctaws and three Majors made it onto the D3Football.com 2013 All-South Regional Team.

Antonescu, who was a two-year starter at Memphis University before transferring to Mississippi College for one season, was on the Second Team All-Conference in the American Southwest Conference. The former Ridgeland High School star didn't allow a sack all season and recently played in the National Bowl Game in Miami, Fla., which honors top non-FBS players from around the country.

Weddle was named to the First-Team All-Conference Team in the ASC after leading the conference with 125 tackles, including 66 solo tackles, 10 tackles for a loss, 1.5 sacks, three forced fumbles and two interceptions. The junior linebacker from Frisco, Texas, recorded double-digit tackles in all but three games and is a finalist for the 2013 Cliff Harris Award, given to the small college (DII, DIII, NAIA) Defensive Player of the Year.

Stewart, named to the Second Team All-Conference, was part of the Southern Athletic Association. The Foley, Ala., native finished the season with 42 tackles, 8.5 tackles for a loss, four sacks, one forced fumble and one fumble recovery this season.

Bell was named SAA Defensive Player of the Year in the SAA for the second straight season and made the All-Regional Team for the second straight year as well. The Metairie, La., native had 57 tackles, 19 tackles for a loss, 12 sacks, a forced fumble and a fumble recovery. Bell's 12 sacks ranked him sixth in the nation in that defensive category.

Barthelemy was named SAA Offensive Player of the Year and won the fan vote for the Conerly Trophy with 500 votes, besting eventual winner Gabe Jackson's 364 votes. The Port Sulphur, La., native finished the season with 1,400 yards rushing and a school record 21 touchdowns. He also added 146 receiving yards, putting him over 1,500 total yards of offense on the season.

South Region sports information directors and D3football.com staff selected the teams for balloting from 257 nominations by Division III member schools. They chose a total of 75 players.