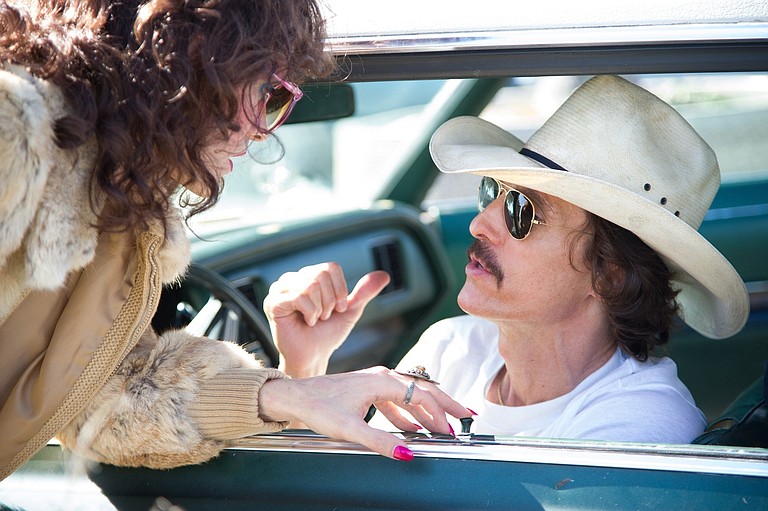 "Dallas Buyers Club" is about fighting for a life you don't have time to live. Based on a true story (I don't know where fact stretches into fiction), a redneck cowboy named Ron Woodroof (Matthew McConaughey) contracts AIDS from his prolific and unprotected intimate encounters with sexy ladies, whom he copulates with at the rodeo while watching the bull rides or in pairs at his trailer.

Ron, with the masculine-defining mustache, has no female friends—only conquests. Among his boy chums, Ron speaks like a Neanderthal thug, hating homosexuals and people of color and bragging about the volume of his sexual exploits. (These baser elements may have been amped up to provide dramatic foreplay for the unfolding events. At least one Dallas writer, who knew the real Woodroof, claimed he wasn't homophobic.)

Ron believes that a heterosexual stud such as himself cannot get AIDS. "There must be a mistake," he tells his doctors, who wear gloves and masks when they break the bad news to him. It's the mid-1980s, and even well-meaning doctors are scared by the unknown. The AIDS epidemic challenged the medical community, the FDA and the public—"And the Band Played On" is a great film exploring the AIDS crisis.

Ron's doctors give him 30 days to put his affairs in order. He tells them where they can shove their advice and walks out. Ron responds to the bad news by engaging in drinking binges, snorting coke and continuing his old lifestyle until he collapses. He demands to see a doctor about the latest drug, AZT, which is not yet FDA approved. Dr. Eve Saks (Jennifer Garner) tells him she will speak to him, and he accuses her of not listening, because he wants a doctor! When she blurts back that she is a f-ing doctor, he smiles. "I like your style, doctor."

Ron shares a hospital room with Rayon (Jared Leto), a sassy, drug-addicted transvestite with AIDS. Rayon is part of the clinical trials for AZT. Ron is not. He bribes hospital personnel for the medication and, when that supply dries up, he heads to Mexico for other options. Ron and Rayon reconnect, and they become business partners. They start a buyer's club in Dallas, where club membership is expensive but the drugs to treat AIDS are free. They are drug dealers, peddling non-FDA drugs to provide better quality of life for terminally ill AIDS patients.

Nothing I've seen McConaughey and Leto do on-screen had prepared me for their performances in this film. McConaughey and Leto lost dozens of pounds to convey the illness and addictions of their characters. Every bone is sharp and edged. McConaughey's jeans droop, but not in the playful way they did in "Magic Mike." While his body looks like a walking corpse, Ron's eyes remain snappy and alive.

Leto's Rayon is the sweet spot in the film. He lashes out one-line bombs of funny that serve to defuse escalating tensions. In a New York Times interview, Leto provided some insight into the character: "You're in Texas in 1985, and you walk through a supermarket in drag, you learn how to be funny very quickly as a survival mechanism."

Directed by Jean-Marc Vallee, the whole film rides on the power of individual moments, which swing back and forth through a rocky emotional spectrum. Ron's cocky bluster highlights his vulnerability. He refuses to let death take him without a fight. It's like riding the bull at the rodeo. How many more seconds can you hang on? Hang on Ron, just hang on!