Ripple Effects of ‘One Lake’ 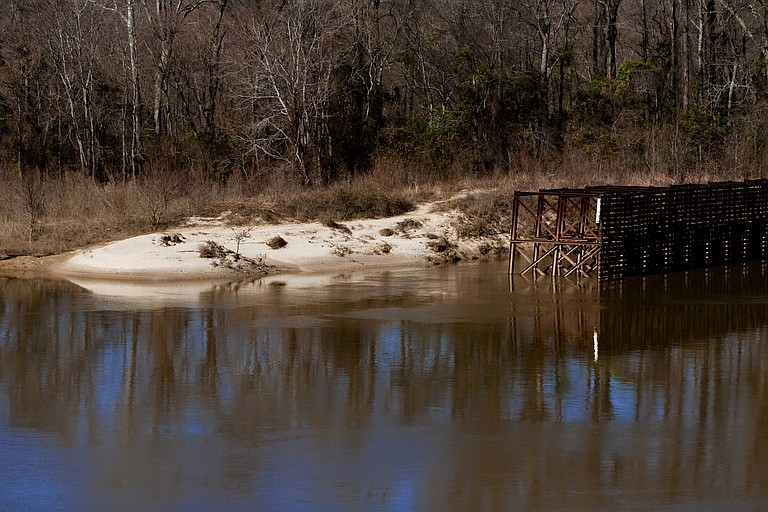 Fifty years ago, completion of the Ross Barnett Reservoir changed the ecology of the Pearl River. Conservationists fear that a flood-control plan now underway would alter it again. Courtesy Tom Beck

Its pricetag aside, one of the main objections to oil wildcatter and would-be developer John McGowan's "Two Lakes" idea was that damming and dredging the Pearl River would have inundated Mayes Lake and a portion of its surrounding land as well as threaten endangered animals that make their homes on the river.

Though the retooled "One Lake" flood-control plan purports to be friendlier to the river's ecology, concerns about the environmental effects of the proposed project persist in Jackson—and beyond.

Andrew Whitehurst, assistant director of science and water policy at the Gulf Restoration Network, said construction of the Ross Barnett Reservoir, which concluded in 1963, changed the Pearl River's ecology; now only 50 years later, damming the river to create a lake would change the Pearl again, he warns.

"It's an altered system, and this will further alter it," Whitehurst said of the lake project.

The lake would destroy sweet gum, sycamore and white oak trees that are more than 80 years old, Whitehurst said. The trees function as a habitat for migratory birds and provide friction when the Pearl's water table rises. Without that friction, the water's velocity would increase, potentially worsening flash flooding in already flood-plagued Jackson, he said.

In addition, damming the river for a lake would require overcoming the legal hurdle of the federal Endangered Species Act. Along the capital-city section of the Pearl, the act protects the ringed sawback turtle, which nests in river sandbars, and the gulf sturgeon, even though biologists have not seen the fish this far up the river in years.

"Don't count the sturgeon out," Whitehurst warned. "They've been at this for 270 million years. They're very adaptable."

In 2011, McGowan formed a nonprofit called the Pearl River Vision Foundation to promote the revised lake project, which he believes can reduce flooding and attract economic investment from developers. Under federal law and an agreement with the Rankin-Hinds Pearl River Flood and Drainage Control District (aka the Levee Board), PRVF is completing engineering work on the environmental-impact assessment required under the National Environmental Policy Act.

The survey, which should take another year to complete, will consider various flood-control plans and the environmental effects of each. Of the alternatives, the Levee Board will select a so-called "tentative select plan" to present to the U.S. Army Corps of Engineers, the federal agency chiefly responsible for flood protection.

Dallas Quinn, PRVF's spokesman, said it's still too early in the process to know which option—a lake, expanding the existing levees, building a dam or doing nothing—would best mitigate flooding in the capital city.

Despite getting hit with a total of $1 billion worth of damage resulting from floods in 1979 and 1983, Jacksonians aren't the only residents keeping tabs on development along the 444-mile-long Pearl River, which forms at the confluence of two creeks in Neshoba County.

"We already feel effects of what they have up there now at the Ross Barnett Reservoir," said Janice Griffin, who lives near the Pearl's mouth in Louisiana, and is a member of the nonprofit Lower Pearl River Watershed Conservation District.

Since the reservoir was constructed, Griffin said the water table drops so low that some sections of the Lower Pearl become impassable in the fall, which threatens Gulf sturgeon and oyster beds that depend on water flow.

Griffin opposes the proposed One Lake plan, but said her concerns could be allayed if Jackson-area officials present a water-flow management plan that demonstrates minimal impacts on the Lower Pearl.

"We've never really stood up down here, so now I guess it's time for us to stand up," Griffin said.

The Levee Board and PRVF will hold a meeting Aug. 29 at 6 p.m. at the Mississippi Agriculture and Forestry Museum (1150 Lakeland Drive, 601-432-4500). PRVF has also scheduled a public meeting to hear concerns of down-river residents for September.

Citizens can make oral comments at the event, and submit comments through the mail and at www.pearlrivervisionms.com. The Levee Board's address is: P.O. Box 320069, Flowood, Miss., 39232-0069.

Whitehurst, of the Gulf Restoration Network, criticized the format. "It seems they are just going for as much of a slam dunk as possible while still fulfilling the need for the meeting," Whitehurst wrote in an email to supporters.

Levee Board officials said they selected a more controlled format for the meeting to prevent people from making prolonged public speeches.

My advice to them: Quit trying to make Jackson and its environment something it's not so you can profit from the taxpayers for footing the bill for building it and steal our natural resources from the future.