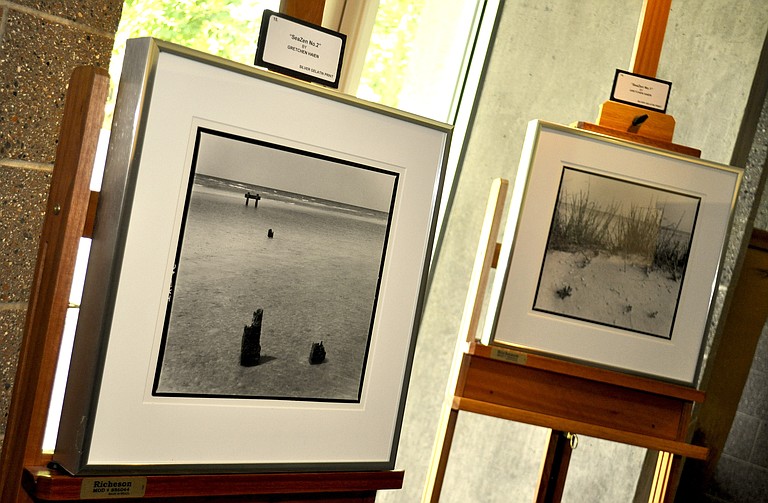 The “Contemplations” exhibit runs at the Mississippi Library Commission through Aug. 29. Trip Burns

The Mississippi Library Commission is a catalyst for contemplation nestled in a wooded quadrant off the southern end of Ridgewood Road on Eastwood Drive in northeast Jackson. Jackson architectural firm Duvall Decker Architects designed the commission's headquarters building, which has won several awards since its opening in 2005. They include the prestigious American Architecture Award, which the Chicago Athenaeum Museum of Architecture and Design gave in 2007. The American Institute of Architecture Design for Decades exhibition also recognized the building as an example of design excellence in civic buildings worldwide in 2010.

The commission building is austerely beautiful, with its faceted stone exterior, and its modern, warmly wooded interior and inviting layout. It includes a screened reading porch on the east side and a beckoning computer and reading room on the north side. It is the type of space perfect for contemplation.

In addition to providing traditional and emerging library services and meeting rooms, the Mississippi Library Commission regularly hosts art exhibits as a community outreach and a service to Mississippi artists. "We really want to share our beautiful facility with the people of Mississippi," says Ethel Dunn, executive support director of the commission. "Art is a way to bring people in, and hopefully, they will come back."

Haien, an associate professor of art at Belhaven University where she teaches photography as expressive art, owns the fine-art photography studio "Studio 4" (601-291-8759, gretchenhaien.com) She exhibits her work in Mississippi, Louisiana, Virginia and West Virginia.

In the "Contemplations" exhibit, Haien shows three separate groups of photography, including her "Interior Frontiers" suite of gelatin images. "The photographs are surreal and personal, capturing a specific moment in time which defined her life," Whitehead says of the suite.

The photos are an exploration of the metaphysical. "With this new series, I have become increasingly enamored with the edge of the photographer's frame, how it reorders and redefines our perception of reality," Haien says. "Each photo becomes an abstract and metaphysical slice of the real world charged with both the mystery and the magic of intuitive insight, uncovering the spiritual within the physical and allowing each photo to become ... a space defined with a presence and an invitational whisper."

When discussing it with Whitehead, Haien suggested pairing her art with Cox's for the exhibit.

Cox is a Virginia native who has lived in Mississippi since 1972. He has worked with several university-level architectural programs, including as adjunct assistant professor at the Mississippi State University School of Architecture. Whitehead is excited to include Cox's work. "Fletcher is absolutely the best woodworker in my book," she says.

For the exhibit, Cox submitted both utilitarian and art pieces, including many small works such as bowls, plates and boxes. His architectural knowledge is especially evident in some of the larger pieces, particularly in the cherry wood and copper "Corner Cabinet," which is aesthetically rustic but tactilely smooth, and his intricately made "Joint Chair."