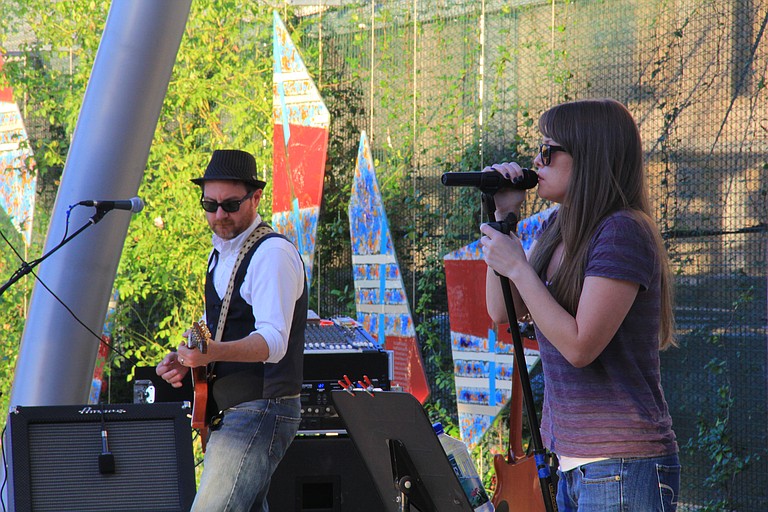 The High Note Jam Series is the musical lovechild of two anchor arts organizations in downtown Jackson, namely the Greater Jackson Arts Council and the Mississippi Museum of Art. The outdoor concert series, which kicked off in 2011, runs twice a year at the height of the spring and fall seasons.

Located in the museum's Art Garden, families and friends can gather after work for live performances by regional bands and musicians. For a month of consecutive Thursday evenings, the garden's welcoming green space is offset by the transitory art of music and sound.

The two organizations sit on the north and south ends of one city block, with rays of sidewalk span the garden and lawn between, connecting the two literally and figuratively. For the concert series, the yin-yang pairing plays out beautifully--with the Art Garden as venue, MMA provides the facility, staff and security, while the Arts Council researches and handles the bands and musicians who perform and both organizations promote.

"Working with the Arts Council has been great," Rankin says. "They have inroads into the music community, so we rely on them to help us figure out who the performers will be for the season."

Tammy Golden, the special events manager for the Arts Council agrees with Rankin and elucidates on the benefits of partnering, a strategic approach in an era of declining funding for the Arts.

"The High Note Series was created so we could step out and promote local music, as well as what's happening downtown in the new arts district," Golden says. "We wanted to create something that would attract a new audience to downtown. All the musicians that we work with agree to self-promote. We want to bring their following downtown so they can see what's going on."

Beginning in April, when the flowers are in bloom and the leaves have reached full green, this spring's installment of High Note Jam shows equal promise and potential. Each night in the series has a theme: Indie Music, Urban Hip-Hop and Mississippi (Blues) Music. The season will wrap up in early May with an exciting new addition: The Arts Council's first "Sing Your Song" contest, which they plan to make annual.

"We're really excited about the opportunity to showcase local talent," Golden says. "So much of what we do at the Arts Council involves visual arts--we're looking forward to tapping into the really strong musical talent here in Jackson."

An event in and of itself, the Sing Your Song contest will be managed by online marketing platform, sonicbids.com. Songwriters have until April 10 to upload their submissions. Judges will choose 12 finalists from the site to perform their song May 2, The judges will award first, second and third place cash prizes, with a top prize of $1,000.

Another big draw for the series, thanks to the help of corporate sponsors, the concerts are free of charge. The Art Museum will offer a cash bar but people are welcome to bring their own picnic food. Both Rankin and Golden stress that the concerts are family friendly--Urban Hip-Hop Night included--and meant to be enjoyed by all ages. The concerts run from 5:30 to 7 p.m., leaving plenty of time to get back home for dinner and homework.

For more details about the series, visit msmuseumart.org/events-current-month.html. All Sing Your Song contest rules and restrictions and submission details are available at sonicbids.com/singyoursong.

April 11: Indie Night with Liver Mousse, and Alexis and the Samurai.

May 2: Sing Your Song Contest with 12 finalists performing their songs.