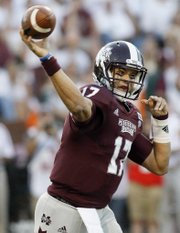 Of all the college football teams in the state, Mississippi State has the best record so far this season.

It was a tough weekend overall for Mississippi college football teams. Ten teams that were featured in the JFP College Football preview played Saturday, and only four won their games. Mississippi College and Millsaps had the week off and will be back in action next week.

Mississippi State so far is having the best season of any of team in this state. The Bulldogs moved to 4-0 on the year with a 30-10 victory over South Alabama this Saturday.

MSU hasn't looked great on offense since their big win over Auburn, but the Bulldogs defense has been stout all season long. The meat of the MSU schedule hasn't even started, and this team will have a chance to be undefeated before heading to Alabama on October 27.

Mississippi State is off this week and returns in October to face Kentucky in SEC play.

Ole Miss is 3-1 after spanking a bad Tulane team 39-0 on the road. The Rebels bested the weaker teams (Central Arkansas, UTEP and Tulane) on their schedule to start the season, but Texas took them behind the woodshed.

Now the Rebels enter the meat of their schedule. The next six games against Alabama, Texas A&M, Auburn, Arkansas, Georgia and Vanderbilt will determine if Ole Miss can reach six wins for a possible bowl berth. Auburn, Arkansas and Vanderbilt haven't been great this season. The Rebels are close in talent with all three teams and wins over all three wouldn't be a huge surprise.

Belhaven set a school record in single game scoring by scoring 70 points against Campbellsville University (Ky.). The Blazers won the game 70-28 at home for their first win of the 2012 season and to move to 1-3 on the season. Belhaven also set records for most touchdowns (10) and extra points (10) in a game.

Southern Miss' terrible start to the season continued this past Saturday. Western Kentucky defeated the Golden Eagles 42-17 in a game that wasn't as close as the final score would indicate.

The Golden Eagles are struggling on both offense and defense this season, and they are 0-3 to start the season for the first time since 1976. Their consecutive winning season streak could end this year if things don't turn around quickly.

Jackson State faced a Southern University team that lost to Mississippi Valley State 6-0 the week before. JSU did nothing for three quarters as Southern built a 28-0 lead to head into the fourth quarter.

The Tigers mounted a furious comeback, scoring 21 points in the fourth quarter but falling short as Southern escaped with a 28-21 victory. JSU falls to 1-3 on the season and 1-1 in SWAC play.

Alcorn State faced FBS (Football Bowl Subdivision) team Arkansas State last Saturday. The Braves were overmatched talent-wise on the field and it showed. Arkansas State was up 42-0 at halftime and cruised to a 56-0 victory over ASU. Alcorn State falls to 1-3 this season.

MVSU is now 1-3 on the season but 1-1 in SWAC play. Northwestern State didn't count in the SWAC standings.

In fact, all three Mississippi SWAC teams are 1-1 in conference play. Alabama A&M is 3-0 in the SWAC East and is likely to be the team that JSU, ASU and MVSU will chase.

Delta State dropped its Gulf South Conference opener in a 20-12 loss to North Alabama. The Statesmen are 1-2 on the season and 0-1 in GSC play.

Hinds Community College dropped their second game in a row after losing to rival Copiah-Lincoln Junior College 21-6. The Eagles are 2-2 on the season.