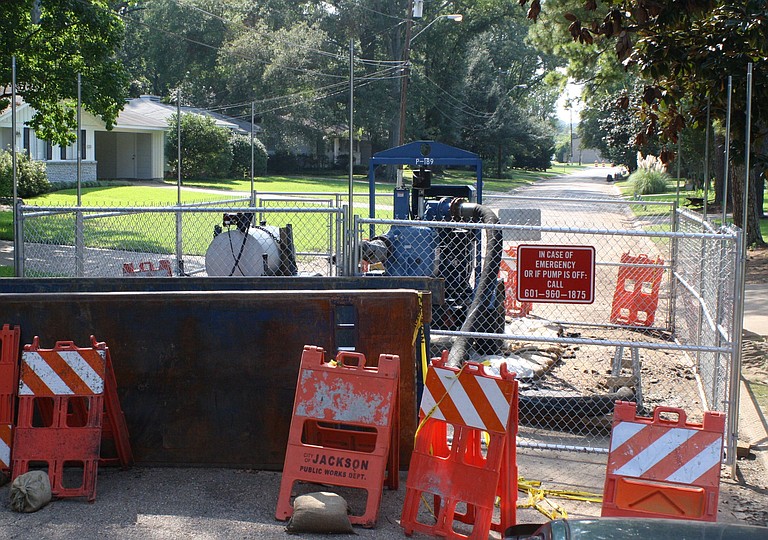 This bypass pump on Sheffield Drive runs 24 hours a day to help divert sewage past a break in the city's line that runs under the street. Photo by Jacob Fuller.

Amanda Adams, her husband, Kelly, and their two sons moved into their home on Sheffield Drive in late May. A few weeks later, a noisy, smelly and unwelcome guest appeared in the street directly in front of their house.

Since June, the Adams and their neighbors have had to listen to the round-the-clock work of a bypass pump that diverts sewage around a break in the line under Sheffield Drive to where the line is in working condition.

The pump is so loud that Sharon Jackson, who lives two doors down from Adams, said she can hear it inside her house. Adams said it was difficult for her family to sleep through the noise in the beginning.

"At first, we had to adjust," Adams told the Jackson Free Press over the noise outside her house. "Now we're used to it. I only notice it when (the city) comes and shuts it off, because we wonder where (the sound) went."

Adams said the street always floods during rains. After a particularly hard downpour in June, a sinkhole appeared down the street from her house, and sewage began flowing into the street and her neighbors' yards.

The city's Department of Public Works came in soon afterward and covered the sinkhole with a piece of plywood and bags of cement to hold the board down, all of which are still there. That is also when they installed the pump in front of her house to keep the sewage out of the streets.

A few weeks ago, after months of dealing with the pump, Adams noticed the city put a fence around it and completely blocked the stretch of Sheffield Drive between Ridgewood and Old Canton roads to all through traffic.

"I guess that means it's not going anywhere anytime soon," Adams said.

Mayor Harvey Johnson Jr. said the city is working to find the funds to fix the sewage break. He said the problem is a primary example of why the city will soon have to sign a consent decree from the U.S. Environment Protection Agency and the state Department of Environmental Quality that will likely require the city to spend hundreds of millions of dollars over the next couple of decades on wastewater and sewage systems.

The city has been in negotiations with the EPA over the consent decree for about two years. The negotiations have ended, and Jackson City Council will likely vote in the coming weeks to approve the terms of the decree, which council members cannot discuss until they approve it.

Ward 4 Councilman Frank Bluntson said he has not had time to read the whole decree. "Did you see how long it is?" Bluntson asked the JFP, while holding his hands to indicate the stack of documents is 2-to-3 inches thick.

Johnson said the negotiations are very beneficial for the city. The EPA originally asked the city to complete the work, which will equal almost an entire overhaul of the sewage and waste water systems, in 10 years. During negotiations, the EPA extended the timeline first to 15 years, and then to a period longer than 15 years, which Johnson would not specify.

Many cities across the country have faced similar decrees over the past decade due to violations of the Clean Water Act. City Communications Director Chris Mims said the EPA has estimated U.S. cities need $300 billion in water and sewage repairs, combined.

"The U.S. Conference of Mayors really put a lot of pressure on EPA. EPA issued, back in October of last year, in fact, a memorandum to (the southeast) region basically saying, 'OK, lighten up, be more flexible in your dealings and negotiations with municipalities.' And they did," Johnson said.

That allowed the city to negotiate more time for the repairs, at least. The city will not release any further details until the decree is finalized.

The issue on Sheffield Drive is only one of several prominent issues with the city's sewage and wastewater system, and the city has to find room in the budget for all of them. Once the consent decree is final, the city will no longer have the choice to ignore the wastewater and sewage issues--not that Johnson's administration ever has.

When Johnson first took office in 1997, he put a water and sewer master plan into action. Since then, under his administration, the city has spent close to $200 million on water and sewer repairs.

"This is not a problem that started even 25 years ago," said Barrett-Simon, who has been on the City Council since 1985. "This has become a problem for older cities all over the country. The infrastructure that is underground right now in some of the areas of the city has been down almost 100 years."

The city will get no grants from the federal government to pay for the repairs. That burden rests solely with the city and ratepayers. Mims said Johnson and the council are going to explore every avenue for funding available to minimize the effect on taxpayers. Those avenues include the state's revolving-loan program for water-pollution control, which is funded, in part, by the state and federal governments and administered through the DEQ. The city must pay the loans back at an agreed-to interest rate at or below market rates.

To fund the improvements, the city will also look into bond issues and a sales-tax increase, which the city has sought from the state Legislature for at least two years. The bill failed to pass both years.