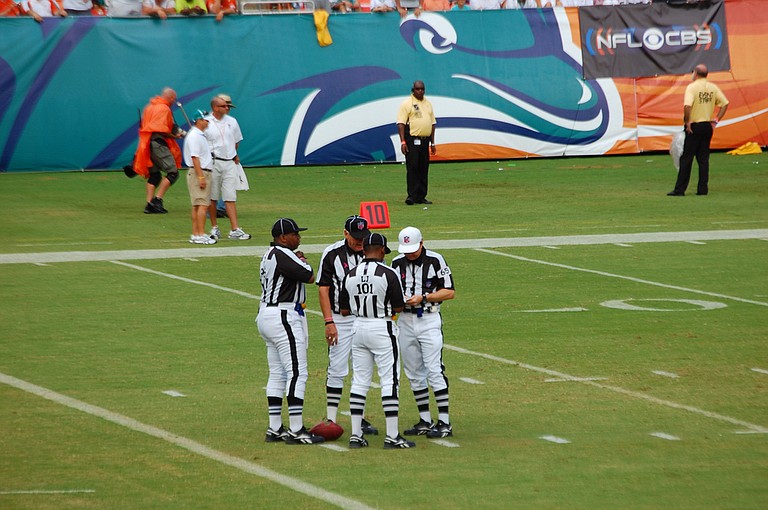 NFL replacement referees have been a touchstone of discussion among fans. Courtesy of Flickr/Mr. Usaji

GREEN BAY, Wis. (AP) — With the Green Bay Packers still seething, fans pondering the possibility of turning off their televisions on NFL Sundays and even the President weighing in, it's official: Overnight, the NFL's replacement referees went from minor nuisance to staggering problem.

With the league's regular officials locked out since June and frustration with their replacements already festering throughout the league, the worst-case scenario finally materialized in Monday night's Packers-Seahawks game in Seattle: A mistake by a replacement official decided the outcome of a game.

A last-second scrum in the end zone was ruled a touchdown to Seahawks receiver Golden Tate. But Packers players, their fans and much of the football-watching public saw a clear-cut interception by Green Bay's M.D. Jennings.

Aaron Rodgers used his weekly radio show Tuesday as a platform to lash out at an NFL-issued statement explaining the replacement officials' decision. The MVP quarterback also questioned the league's priorities in its labor dispute with the regular refs.

"I just feel bad for the fans," Rodgers said on Milwaukee's ESPN 540 AM. "They pay good money and the game is being tarnished by an NFL who obviously cares more about saving a little money than having the integrity of the game diminish a little bit."

Even President Barack Obama got in on the conversation Tuesday, tweeting: "NFL fans on both sides of the aisle hope the refs' lockout is settled soon."

Packers coach Mike McCarthy continued to take the high road Tuesday night, but said he did appreciate the passion of a handful of fans who stood outside Lambeau Field with protest signs. McCarthy also said he thought the play "clearly" was an interception. His colleagues around the NFL apparently thought the same thing.

"I received more text messages and emails than I did after the Super Bowl," McCarthy said. "I can tell the impact this made."

And while the NFL and its regular officials resumed talks in an attempt to resolve the impasse, every day the labor dispute lingers could further tarnish the league's reputation.

"At this point, the NFL leadership is on a disappearing island," said Ramsey Poston, a crisis communications expert and president of Tuckahoe Strategies.

"Virtually every important stakeholder group, including its broadcast partners, coaches, players and fans are outraged. Every day that goes by without resolution to the dispute is another day the brand is damaged. And a damaged brand potentially means lower TV ratings, more empty seats and fewer tickets sold. We might not see that this week, but we will if the lockout extends through the season."

Poston, who managed communications for NASCAR for nearly ten years — including the fallout around the death of star driver Dale Earnhardt — said Monday night's game was a turning point that requires swift action.

"Disaster is lurking," Poston said. "There is no reason to believe the replacement referees will suddenly get better — and now in light of all the negative media attention their confidence as a group has to be shot to hell. How could anyone perform under these conditions? They will be second guessed on every call."

In a statement issued Tuesday, the NFL said Seattle's last-second touchdown pass should not have counted because Tate should have been called for offensive pass interference, ending the game with Green Bay winning. Instead, officials ruled it a touchdown, and penalties either way are not reviewable.

That left it to whether Tate and Jennings both had possession of the ball. The officials said they did, but the Packers insisted Jennings had clear possession for a game-ending interception.

The NFL agreed that the replay was inconclusive, upholding the touchdown and giving Seattle the victory.

"The NFL Officiating Department reviewed the video today and supports the decision not to overturn the on-field ruling following the instant replay review," the league said in a statement.

Saying there was no indisputable evidence, though, is not the same as confirming the initial call was correct.

Rodgers, in a reference to referee Wayne Elliott not seeing indisputable evidence, said: "I mean, come on, Wayne. That's embarrassing."

The Packers, one of sports' most storied franchises, fell to 1-2. The Seahawks are 2-1.

On his weekly appearance on Seattle radio station 710 KIRO-AM, Seahawks coach Pete Carroll made no apologies Tuesday, saying, "The league backed it up and game over. We win."

"This decision to remove more than 1,500 years of collective experience has simply made the workplace less safe," he wrote, adding, "We are actively reviewing any and all possible actions to protect you."

The NFL locked out the officials in June after their contract expired. Unable to reach a new collective bargaining agreement, the league opened the season with replacements, most with experience only in lower levels of college football.

Coaches and players began griping about the officials in the preseason, but the tension seemed to boil over this past weekend. Scuffles after the whistle were frequent with players appearing to test the limits of the new officials, and coaches were fined for berating them.

Fans' fascination with the finish was evident in the number who stayed with ESPN to watch the highlights on "SportsCenter" after the game: 6.5 million viewers, the most for the full-length show since records started being kept in 1990.

Las Vegas oddsmakers said $300 million or more changed hands worldwide on Monday's call. The Glantz-Culver line for the game opened favoring the Packers by 4½. Had the play been ruled an interception, Green Bay would have won by 5.

The call also found its way into Wisconsin politics, with Republican Gov. Scott Walker tweeting for the regular officials to return. Opponents noted that he seemed to be supporting the referees union after going after public employee unions last year, though Democratic state Sen. Jon Erpenbach added: "We're all fans, first and foremost."

McCarthy, meanwhile, said the team needs to move past the incident and focus on Sunday's game against New Orleans.

"We're not going to get any help," McCarthy said. "I know this is going to be a story that everybody wants to continue to talk about. And frankly, I'm not going to act like it's not there. This is a play that I'm sure we'll see on TV as we move on in our lives. That's the facts of our business."