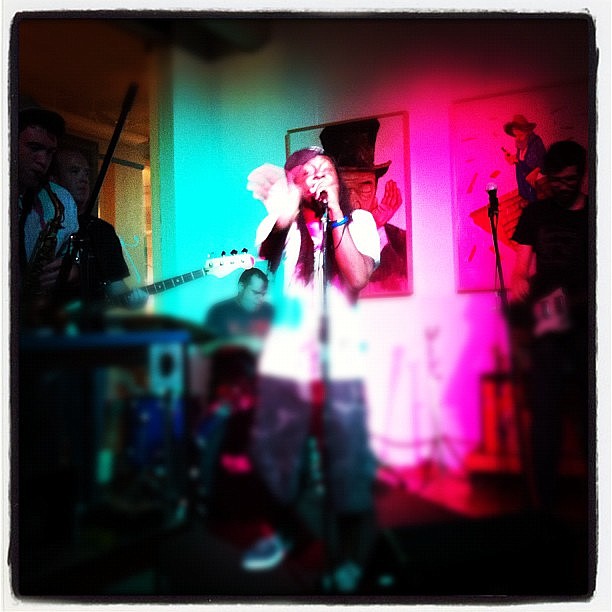 Collaboration in the music scene, such as the one between 5th Child and Spacewolf, is one of the major components of today's music scene in Jackson. Courtesy 5th Child

At the first installment of the Blender series this summer, That Scoundrel, James Crow, 5th Child and Furrows performed, attracting both rap and rock fans to Martin's. Toward the end of the concert, 5th Child did a few songs with the band Furrows, which was arguably the best part of the night. The collaboration between the rapper and local rock band went smoothly, and the crowd seemed to be into the groove more than ever.

"It looks really good in my eyes to see fans of two different genres coming together like that," 5th says. "That stuff is really cool. That's where we're headed right now—using music to bridge the racial barrier."

Local musician Cody Cox and JFP columnist Garrad Lee organized the Blender series. The next one is set to be in Knoxville, Tenn., and Liver Mousse will perform with 5th Child there.

5th Child also performed earlier this month with the band Spacewolf at MorningBell Records and Studioes as 5thWolf. They mainly performed 5th Child songs with a live band instead of a computer-generated beats behind him.

Murph Caicedo, the drummer for Spacewolf, came up with the idea after hearing a collaboration that 5th Child did with a rock band while in New Orleans several years ago. Spacewolf hopes to release a collaboration album with 5th Child next year.

"It was packed, and there was a really mixed crowd," 5th Child says about the Blender series. He feels that these types of collaboration would not have been possible 10 years ago in Jackson. Musician, arranger and composer Jamie Weems feels the same way.

Arden Barnett has been promoting shows for close to 30 years, and is becoming a major player in the music scene today. He is currently selling tickets for about 23 concerts of touring musicians for this month and next.

Barnett moved back to Jackson around 1986 from Birmingham, Ala. Back then, he says, there were not enough people willing to promote shows and own venues here to bring folks to the city.

Barnett booked music for Hal & Mal's and Jubilee!JAM for eight years. The Jackson Arts and Music Foundation indefinitely cancelled Jubilee!JAM, which used to be Jackson's largest music festival, due to low attendance and lack of corporate sponsors in 2010. Weems thinks that what we have now is more sustainable and cost-efficient.

Various smaller festivals such as Jacktoberfest, Sneakyfest and Babalooza have popped up. These mini-festivals "probably have a bigger impact on people," Weems says. He also admires Barnett's work with Ardenland to bring in high-quality acts from other parts of the country at reasonable prices. "Since I've been here, I feel like there hasn't been anything really like that," he says.

"We're on par with damn near any city, if you ask me," Barnett says. "For our size of a town, I think our music scene is as good as anyone."

Venues such as Duling Hall, Martin's, Ole Tavern, Underground 119 and Hal & Mal's have live music almost every weekend and sometimes during the week as well. While they thrive along with urban spots like Freelon's, Dreamz and The Spot, 5th Child still thinks something is missing.

"I would like to see a lot more live venues open their doors to hip-hop and to know that we can draw a good crowd and throw a good show," 5th Child says.

He feels like there is a stigma attached to hip-hop, causing promoters to steer away from booking those shows. His most recent performances have been on the road.

Brad "Kamikaze" Franklin, rapper and JFP columnist, has been the managing partner of Dreamz JXN for two years. As an artist and a businessman, he's able to see both sides of the coin. Dreamz hosts showcases twice a month for independent artists. "Dreamz is trying to be at the forefront of being more accommodating for independent artists, especially in hip-hop," Kamikaze says.

Barnett believes that Jackson needs a larger-scaled venue. "I know it's possible. I know it's going to happen," he says. "It has to happen with the way our town is growing."

For Cody Cox, the biggest change in Jackson's music scene is a sense of community. Ten years ago, there may have been some diverse bands—take Storage 24, for example—but there weren't as many working together.

"There were a lot of great bands when I moved here (in 2000), but not a lot of them were playing with each other or sharing music or band members," Cox says. Now there could be three or four bands playing somewhere one night, and they all have one or two of the same members. Instead of trying to get famous with one band, Cox says that Jackson musicians are working toward something bigger. "How can we get Jackson and what's happening here on a bigger plane where more people across the country notice it?" he asks.

Barnett and Kamikaze feel that the biggest change in the music scene in the past 10 years has to do with the rise of the Internet. "The first and foremost most drastic change in the music industry is the Internet. There are no ifs, ands or buts. That's it. And social media," Barnett says. According to him, the same types of music that there is today has always been around, we're just able to access it easier.

Kamikaze looks at it from a different perspective. "Ten years ago, you almost had to have a record label behind you," he says. "The music industry has changed so fast; it has just blown my mind."

"The only reason you should want a record deal now is because you want to be famous," Kamikaze says. He believes musicians should instead be focusing on perfecting their craft and that everyone should follow the independent model.

Weems says there was a real shift in how people spent their money. "I feel like in the past three or four years, there's been an increase in people that have an expectation that there should be good art and music (in Jackson)," he says.

"I'm seeing more support from the public in this generation than I've ever seen," Kamikaze says. "The love is definitely greater, but of course it can be better."