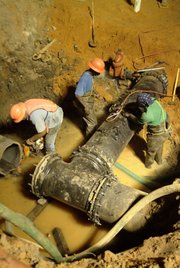 The city will soon have to begin what could amount to more than $200 million in sewer and water improvements to comply with the federal Clean Water Act.

The city of Jackson will soon have a sewer repair bill that could rival the city's entire annual budget.

The U.S. Environmental Protection Agency and the state Department of Environment Quality have handed down a decree to the city that requires it to make major improvements to its water and sewer infrastructure to comply with the Clean Water Act. City Council President Tony Yarber said the Council is reviewing the proposed plan, which could cost between $200 million and $400 million over several years.

The City Council's water and sewer ad hoc committee is reviewing the consent decree and making sure the city can comply with it, Yarber said Monday after the council's special meeting at City Hall.

Yarber said the city is facing this decree now because of a lack of action by former city leaders.

"It's called neglect. It's called 'close my eyes and hope it goes away,'" Yarber said. "We're talking about years, probably almost a generation's worth of neglect. There's a ton of blame to go around, but we're at a point now that blaming doesn't pay the bill."

Chris Mims, the city's communications director, said Jackson has been in negotiations with the EPA and DEQ for about two years on the decree, which will likely include the city paying a fine for violations of the Clean Water Act, which include sanitary-system overflows, storm water getting into the sewage drainage and overloading the water-treatment plant, lines bursting, and sewage overflowing into streets and yards.

The city will likely have several years to complete the necessary improvements.

Mims said the decree is not a result of neglect on the part of the city.

"The city's spent more than $100 million since 1997 on the wastewater system," he said. "We've been making improvements all along, but we realize that this consent decree is going to probably be several hundred million (dollars) more."

The city will get no grants from the federal government to pay for the repairs. That burden lies solely with the city and with ratepayers. Mims said Mayor Harvey Johnson Jr. and the City Council are going to seek every avenue for funding available to minimize the effect on taxpayers. Those avenues include the state water-pollution-control revolving-loan program, which is funded, in part, by the state and federal governments and comes through the DEQ. The city must pay the loans back at an agreed-upon interest rate at or below market rates.

Mayor Johnson said the city will assess how it can pay off any loans before they take them out. He said the city is already borrowing $23 million this year for wastewater system repairs.

To fund the additional, necessary improvements, the city will also look into bond issues and a sales-tax increase, which the city has sought from the Mississippi Legislature for at least two years. Both years, lawmakers failed to pass the bills.

"Hopefully, we'll be able to work with the Legislature this year and possibly get the local-option sales tax to a state that will be amenable to the city," Mims said.

In April, the city of Memphis, Tenn., signed a similar decree with the EPA. It included $1.29 million in fines and an estimated $250 million in improvements.

In 2011, the EPA lodged a consent decree with St. Louis, Mo., for violations. The estimated cost of that city's repairs was $4.7 billion over 23 years.

Kane Ditto, Harvey Johnson, and Frank Melton were shortsighted at the very least and negligent of the legal and moral obligations to maintain the water quality of the Pearl River. Mr. Yarber is correct to call the city leaders out because they refused to spend their political capital on the issue of sewers and the environment. The city was sued by the Sierra Club many years ago for violating the Clean Water Act so it was aware of the problem. The city recently had its storm-water management plan approved by the EPA and is a party to the flood control and development plans to remake the Pearl River by the levee board. The environmental study for the "One Lake Plan" is being conducted and financed by the development promoters which is hardly independent or scientific. Can you load the river's bounty into an aquarium while you scrap out a massive lake? Run off all of the native waterfowl & wildlife for miles and miles as they move the earth into something fictional like Disneyland. A money maker that will pay for the sewer system?