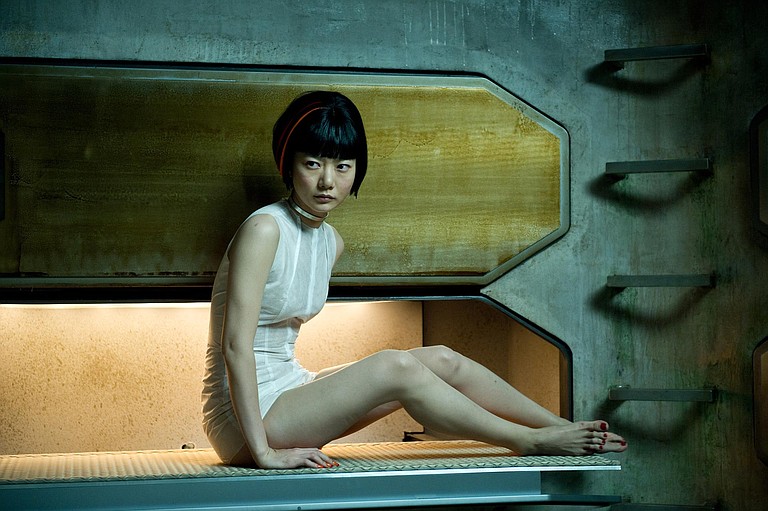 Like the other talented actors in “Cloud Atlas,” Doona Bae portrays multiple characters, including Somni 451 from the year 2144. Courtesy Warner Brothers

“Cloud Atlas” has oracular power on a cosmic scale. Seemingly impossible, a triumvirate force of directors—Lana Wachowski (formerly Larry before gender reassignment), her brother Andy Wachowski and their friend the German director Tom Tykwer of “Run Lola Run” fame—shift time, people and cultures from a kaleidoscopic abstraction of flight and fancy into a gripping morality play.

Somni 451 (Doona Bae), a servant clone from a glittering futurist city called Neo-Seoul circa 2144, delivers the unifying message that binds each of the plots: “From womb to tomb, we are bound by others, past and present, by each crime and every kindness, we determine our future.”

Adapted from a novel by David Mitchell, “Cloud Atlas” uses six different stories, set in time periods that span from the mid-19th century to “106 winters after the Fall,” to tease and entertain our senses and emotions, and illustrate Somni 451’s oral missive. For “Matrix” fans, Somni is this film’s Neo.

The movie opens on a gnarled-up old man (Tom Hanks) with a shrunken eye staring at the night sky in front of a fire. You can almost imagine him tossing a bone in the air in homage to Stanley Kubrick’s “2001: A Space Odyssey.” He could be Prometheus of a new age. The man’s leathered face bears witness to a long life.

The film cuts to a dashing Englishman (Ben Whishaw) inserting a revolver in his mouth. “Suicide takes courage,” he says. We later learn this young man worked as an amanuensis for the leading British composer (played by Jim Broadbent) of the 1930s.

The movie speeds off to Neo-Seoul, where female fabricants are anonymous slaves to the food industry. “Honor the consumer” is the first principle of their ordered society. The filmmakers zip us to San Francisco in 1973, where an investigative journalist for Spyglass magazine (Halle Berry) gets stuck in an elevator with an elderly scientist who later tips her off to an imminent nuclear-power plant disaster.

Further back in time, a young American (Jim Sturgess) on a voyage through cannibal societies in the Pacific Islands protects a stowaway slave (David Gyasi). In the present, an unscrupulous London publisher (Broadbent) markets a lowbrow book titled “Knuckle Sandwich” without paying royalties to the writer (Hanks), who is in prison for killing a critic. When the thug writer’s friends demand the money, the publisher seeks help from his brother (Hugh Grant), but finds himself locked up in an old folks home that looks a lot like mansion where a crotchety composer of the same visage attempted to steal a young man’s composition called “Cloud Atlas.” Luisa Ray (Berry), the California reporter, later buys the record. The chosen people in this film—those who create change—hear the same melody.

The filmmakers whisk us into the age to come, where civilization has been destroyed and small tribes of people kill each for no apparent reason. A higher life form (Berry) visits the tribe and, thankfully, she knows the language of no-verbs.

Hugo Weaving portrays the bad guy in nearly every time zone. He’s an assassin, a slave owner and the devil. Weaving is magnificent, as are the other members of this incredible cast, who cross genders, cultures and racial barriers. Detractors of the film take potshots at Anglo-types playing Asians, but I think they miss the point, which is that skin color and eye shape are irrelevant in the bigger scheme.

All six stories assume there always will be natural and societal laws that favor one group over another; however, one can transcend convention or bend natural order if one can conceive of doing it. If you think a single drop of water has no meaning in a limitless ocean, then ask yourself: “But what is an ocean, but a multitude of drops?”

This movie is a fusion of Wachowski philosophy and politics; you could plaster your refrigerator with its pithy quotes. But the cryptic verbal cues seem more right than wrong. Without them, we would be lost in space and time. Audiences must have felt this way when they first saw “2001: A Space Odyssey” in 1968. In “2001,” the computer, Hal, guides viewers. Here, the breadcrumb trail warping us through time zones is twitter-long phrases of human experience.

This film is a polarizing experience, but I absolutely loved it and can’t wait to see it again to relish the details, find more connections between the stories and understand the mystery. This film has no peers and is a triumph of imagination over convention.