My Ghost of Duff Green 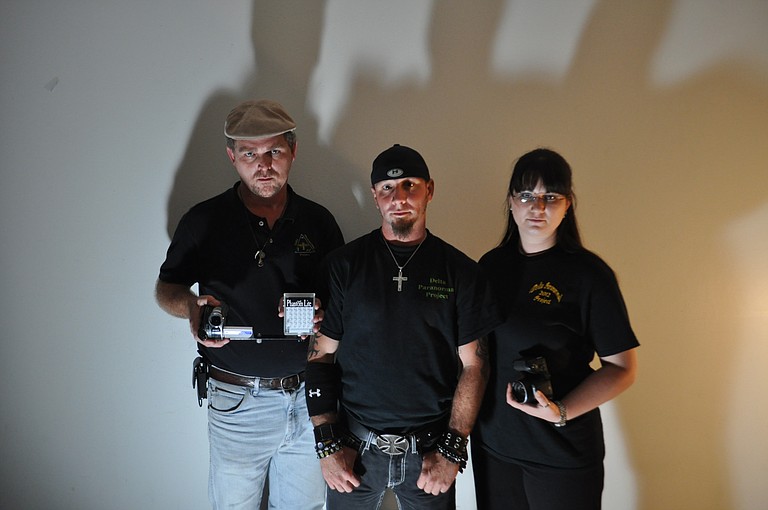 “Hey y’all! The hair on my arm is standing up, I have goose bumps, and I feel a cold spot around me,” I whispered in a trembling voice to my comrades for the evening. “Come look!”

My lifelong friend, Pat Bullock Williams, and my son, Dexter (Bubba) Nettles, appeared at my side to witness the hair on my arms saluting some unknown presence in the ballroom of Duff Green Mansion, which is known as one of the most haunted places in Vicksburg. “OK, now let’s see if we can get Ga-Ga to communicate with us,” Bubba said.

We turned out the lights, switched on the small digital recorder and took our places at a table in the middle of the ballroom to attempt to communicate with the spirit that sparked my interest in my newfound hobby of ghost hunting.

Dabbling in the spirit world is not something into which I have invested years of my life. The fascination began about 10 years ago when Bubba fell in love with Katie Sharp of Vicksburg. I was thrilled with the idea that my son had found somebody he thought was wonderful and even more impressed that she wanted to marry him. Katie is a lovely southern girl replete with gracious manners, good looks and a wonderful personality. Not to mention, Katie had a haunted mansion as her home!

Katie’s parents are Harry and Alicia Sharp of Vicksburg, who are responsible for returning Duff Green Mansion to its original splendor. They have operated it as a bed and breakfast since the mid-1980s. The family lives on the third floor of the mansion where Katie and her brother David were raised.

Built as a wedding gift for his new bride in 1856 by wealthy businessman Duff Green, the home was the center of the social scene until the Civil War and the siege of Vicksburg changed its course in history forever.

During the height of the siege, the Green family sought shelter in caves located on their property. In the caves, Mary Lake Green gave birth to a son whom she named William Siege Green. Union boats stationed about a block away in the river subjected the home to heavy shelling. Visitors can still see evidence of this today: A cannon ball lodged in the ceiling beams of the third floor is preserved behind a Plexiglass box.

To save the house from complete destruction, the Greens volunteered their home to serve as a hospital for both Union and Confederate soldiers, and the shelling ceased as they raised a yellow flag above the home. For several years after the surrender, recuperating soldiers used the home as a residence.

Mr. Green’s death occurred a few short years after the Greens returned to their home, and the family suffered the loss of a young daughter. With the death of Mr. Green, Mary sold the house to another family who kept it for a short while. Since then, the house has played many roles, including a home for elderly destitute women, a boys’ orphanage and, for the years before the Sharp family restored it, a Salvation Army shelter for the poor and needy.

Along with the Sharp family, guests and friends claim to have seen many ghostly figures and apparitions, heard footsteps and a child bouncing a ball, and experienced strange smells. Several paranormal groups have investigated Duff Green and concluded the mansion is definitely haunted.

The ghosts seem to fall into three distinct categories. Many people have recounted seeing the ghost of Mary Green: a young beautiful woman with blonde hair, wearing a green antebellum-style dress. She has appeared to employees and family members.

Others have seen a Civil War soldier. During the siege, the bottom floor of the home was used as a hospital and morgue. Guests and family members attest to seeing these lost souls wandering around the grounds and particularly in one guest suite: the Dixie room. Many guests have reported waking up in the night in this room to see a soldier with one leg sitting near the fireplace.

The third most-documented ghost has been heard more often than seen: a young girl bouncing a ball and laughing. Could this be the young daughter of the original occupants, Duff and Mary Green? It is this young ghost that has sealed my belief that something is there on the other side with the capability of reaching out to those of us still grinding away day-to-day in the corporeal world.

Of Beer Cans and Spirits

After Bubba and Katie’s wedding, I started going to Vicksburg to visit with the newlyweds, who had moved into an apartment on the premises of Duff Green. On my visits, Bubba and I began to have what we called ghost hunts. Mostly, these involved sitting around in the dark, drinking beer and winding up scared to death by just the thought of what we were doing.

Bubba increasingly became the target for ghostly happenings. He has seen a soldier standing silently in a doorway just watching him while he scooped ice from the ice machine into his bucket. He has also heard footsteps crossing the room and has seen mists where there should be none. The fact that the spirits seemed to pick on him more than others tended to make Bubba a little uneasy. I attribute it to his loudness. The Sharp family is a well-mannered, gentile sort and, well, Bubba is a high school football coach. Need I say more?

After my first grandchild, Lydia, was born, my trips to Vicksburg became more frequent. The hunts still continued, yet their thrill seemed to be overshadowed by my role as grandmother. Nonetheless, my hope of communicating or seeing that the spirit world really did exist never faded. As with most situations, the answer usually comes if you wait long enough.

One day, as Katie had Lydia upstairs on the second floor, Lydia began pointing to something or someone only she could see and proclaiming, “Baby.” There was no baby to be found, but her little eyes were focused on something for sure. The “Baby” sightings seemed to occur mostly in the second-floor ballroom. She would smile and interact with “Baby” and even added the word “ball” to the mix. No one else saw what she saw. On one occasion, while on the second floor hallway with her mother, Lydia looked into the ballroom and made a frowning face and hid behind Katie’s leg. She refused to go into the ballroom for quite a while after that. She referred to that experience as “Ga-Ga.”

The fact that Lydia was truly interacting with something or someone that only she could see was amazing. As I began to read about the spirit world, I found that young children are sometimes able to see what we cannot because they are more open to believing what the world seems to tell us cannot possibly be true. I like to believe it was so with Lydia.

That is what sparked my new interest in ghosts and the supernatural at Duff Green Mansion in Vicksburg. I was back there in August, having scheduled another ghost hunt, this time with my friend Bullock and Bubba.

Bullock had never been to Duff Green, and after sharpening our ghost-hunting skills this past year in places such as the Crescent Hotel in Eureka Springs, Ark., and Alcatraz prison in San Francisco Bay, we were excited to try our new prowess on some local spirits.

Sitting at the table in the middle of the dining room while the hair on my arms slowly returned to normal and waiting to hear from either “Baby” or “Ga-Ga,” the three of us randomly took pictures in the dark hoping to capture an anomaly with our cameras. Our equipment list has changed a little: we had no beer cans on this hunt. Instead, Bullock’s digital recorder sat on the tabletop. We hoped it would bear witness to our hunting efforts.

‘We Come In Peace’

After a few minutes of trying to get some type of response from the other side, we reviewed some of our pictures. There, above the enormous, double-hung window was the evidence: A streaking orb was clearly visible in the pictures in the area where Lydia reported seeing “Baby” and “Ga-Ga” most often. I was elated, believing that the cold chill as I entered the room and this orb was related. Being non-professionals, we did not have the time or patience needed to wait further. Spurred on by this photographic evidence, we decided to set up our next hunting ground across the hall in the parlor that opens into the dining room—a place where many have witnessed Mary Green.

Bubba and I took our places on the blue leather couch while Bullock stationed herself in an antique chair to our right.

“We come in peace and would just like to know if you are here with us,” Bullock said into the dark room. “Can you give us some type of sign? Can you knock on something?”

Right after asking these questions, we heard a loud knock coming from the dining room! Since this is a public paper, I am unable at this point to document exactly what Bubba’s comments were as he, in one single move, positioned his 6-foot-3-inch, 300-plus-pound frame almost completely in his mother’s lap while Bullock uttered—in her most genuine voice as if thanking someone at a luncheon for passing her the salt—“Thank you.”

“Get off me,” I whispered hoarsely to Bubba.

“Oh, my God,” I croaked at Bullock. “Say something else.”

Bullock asked for another knock, and our reply was quickly granted with not one, but two very distinct knocks from the dining room area.

“See the little red light on my recorder?” Bullock asked. “Come to the light and speak to us.”

“Oh no you don’t,” hissed Bubba as he noticed that the recorder is positioned right in front of him on the coffee table. He quickly slid it down the table toward Bullock. This was all a little much for our nerves.

“If you want us to leave, then open the door,” Bubba demanded from his new perch on the sofa next to me. He had garnered enough courage to attempt communication with the spirit, although his question implied his hope that the parlor door would swing wide open, thus freeing his path for escape. Several more times, Bubba uttered his plea for the spirit to open the door. Nothing seemed to be happening, so the three of us decided to call it a night.

As we headed out of the parlor door into the wide hall, we were astounded to find a large piece of Empire furniture with its door wide open.

Maybe we should be more specific next time.